Reuters and the Cloned Blown Smoke

Bloggers (I personally refer to myself as an “online columnist”) have taken a lot of heat over the years from the “real” media. The argument issued is that bloggers have no “filters” or editors to keep us from disseminating incorrect information.

I contend we do. Should I screw up, there are several thousand readers out there at any time that will promptly remind me, or any of us, that a piece of information is incorrect, and will bug us mercilessly until we make the proper correction.

The New York Times can just refuse to answer their readers.

I further contend, that if it weren’t for the blogsphere playing watchdog on an arrogant and biased media, Monica Lewinsky may possibly be running for re-election to the Congress with Clinton-thank-you-soft-hush-money, and Dan Rather and Mary Mapes would’ve received Pulitzer Prizes for securing President Kerry’s election with those “forged but accurate” National Guard documents outing George W. Bush.

As the mainstream media is so arrogant that they feel they can pull anything over anyone’s eyes because they are in agreement that the public is so intellectually beneath them, it was only a matter of time before they tried to pull another fast one.

And it wasn’t long before they got busted….

“Reuters withdraws photograph of Beirut after Air Force attack after US blogs, photographers point out ‘blatant evidence of manipulation.’ Reuters’ head of PR says in response, ‘Reuters has suspended photographer until investigations are completed into changes made to photograph.’ Photographer who sent altered image is same Reuters photographer behind many of images from Qana, which have also been subject of suspicions for being staged.”
— Yaakov Lappin, August 6, 2006 Ynetnews

As a professional graphic artist of 30+ years I found this attempt, by whoever was responsible, sloppy at best, an insult to the intelligence of the readers at the worst.

Here is the photograph in question…. 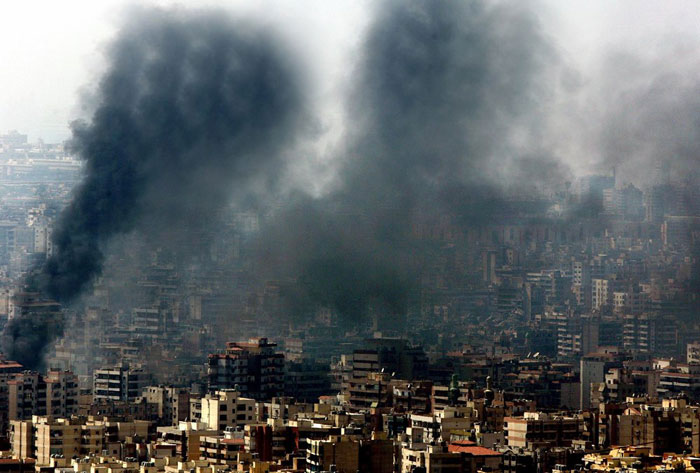 According to the Jerusalem Post, “The photograph, as initially published, showed an aerial view of Beirut after an IAF attack, with two large pillars of smoke rising over the city. The caption read: ‘Smoke billows from burning buildings destroyed during an overnight Israeli air raid on Beirut’s suburbs.’”

This could be a Jayson Blair I-was-there-when-I-wasn’t moment attempted by Reuters photographer Adnan Hajj. He may not just be guilty of manipulating a photograph, but one could conceivably toss in plagiarism to his growing list of offenses.

Photoshop is a graphic art program that enables a trained person to create imagery to order. It has many tools that enable one to cut, paste, resize, reshape, hue, tint, and add effects to images. One can change the color of someone’s eyes, remove blemishes from a face, and such techniques have been used going back to the early Penthouse Magazine days.

However, such doctoring was supposedly taboo when it came to “news” photos. Time Magazine broke that rule with the infamous O.J. Simpson darkened mug shot cover photo, and more recently, USA Today with the zombie-like whitening of Condoleezza Rice’s eyes. 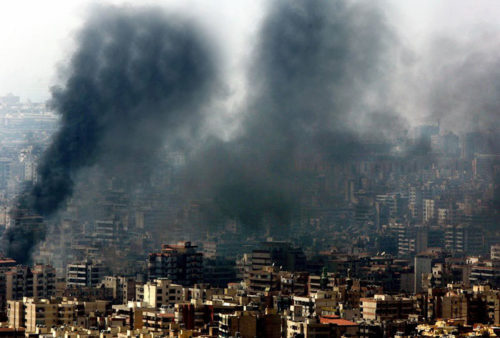 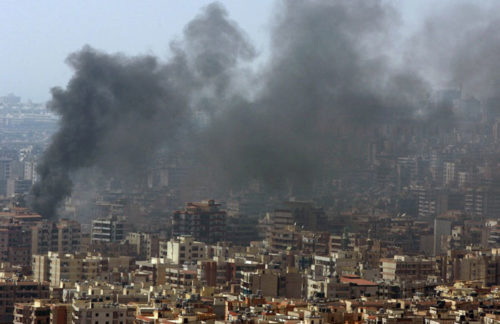 In a side-by-side the public didn’t get the initial opportunity to view, the manipulation is quite evident. The Photoshop cloning tool was used in a most careless, amateurish fashion. Either the “artist” was new to the program or not very good, but to honestly think this could be passed off without being caught is laughable.

The problem is, had it not been for unprofessional eyes and a means of alerting the general public, this fraud would be a part of the public record.

Clearly, this is another example of the real filters out there. Filters that protect the public from arrogance run amok by the traditional news media, full of journalists who “want to make a difference” instead of just reporting the news as it happens; not as they want it to be.

We should all be comforted by the fact that Reuters is conducting an investigation. I maintain all the evidence has been laid out and unless there’s a bloodstained glove somewhere, the verdict is guilty.

“Reuters, the global news and information agency, told a freelance Lebanese photographer on Sunday it would not use any more of his pictures after he doctored an image of the aftermath of an Israeli air strike on Beirut.”

“The photographer has denied deliberately attempting

to manipulate the image, saying that he was trying to remove dust marks and that he made mistakes due to the bad lighting conditions he was working under. This represents a serious breach of Reuters’ standards and we shall not be accepting or using pictures taken by him.”
— Moira Whittle, head of public relations for Reuters in a statement issued in London

Bad lighting on a computer screen and dust marks on a digital photograph…? Maybe Moira should take a Photoshop class before she attempts to pass that BS.