Nowhere in American society are Americans asked to participate in surveys or polls where a certain boost is given to one of the subjects over the other… that is, with the exception of political polls. Polling units almost always appear to ask more Democrats than Republicans and those results are not only made public, but become the basis for news stories and political narratives until the next poll comes out.

Have you EVER seen a poll that oversamples Republicans? I haven’t. I mean, not one of these. Not one of the Drive-By polls. NBC/Wall Street Journal, ABC/Washington Post, CBS/New York Times, I’ve never seen one. But this is how you get the result you want.
— Rush Limbaugh, 7/17/17

Here are some media poll creations “weighted” towards a preferred Democrat narrative for uniform media dissemination.

6/22/18
The Hill: Poll: Large majority thinks Trump self-pardon would be unacceptable
AP-NORC Center for Public Affairs Research: Numbers undisclosed
“The AP-NORC poll of 1,109 adults was conducted June 13-18 using a sample drawn from NORC’s probability-based AmeriSpeak Panel, which is designed to be representative of the U.S. population.”

3/21/18
Daily Mail: Poll shows TWO-THIRDS of American voters think Trump is a bad role model for children and half are embarrassed to have him as president
Politico: Trump’s disapproval lowest in more than a year
Quinnipiac University: 35% Independent, 32% Democrat, 6% Other, 27% Republican

3/1/18
WaPo: Most Americans think Trump is racist, according to a new poll
Quinnipiac University: 40% Independent, 29% Democrat, 6% Other, 24% Republican

8/6/17
Marketwatch: These are the most and the least trusted news sources in the U.S.
Reynolds Journalism Institute: “Trump” is #5 as “news brand” not trusted? 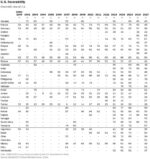 Pew Global: U.S. Image Suffers as Publics Around World Question Trump’s Leadership
Results are consistent with capitalist vs. liberal socialist ideologies and depending on whom they got to answer the phone or personally meet up with: specifics Pew Global’s “national samples” omits

BTW — We’ve omitted polls from those who irresponsibly omit political affiliation breakdowns, or in some cases like Gallup, offer no methodology information at all.