Precedence: The Bills-Bengals Game Should NOT Have Been ‘Suspended’

Before there’s any more succumbing to the superficial emotions evoked by the injury to Buffalo Bills safety Damar Hamlin, and as I suggested on Twitter, let’s put things into proper context. 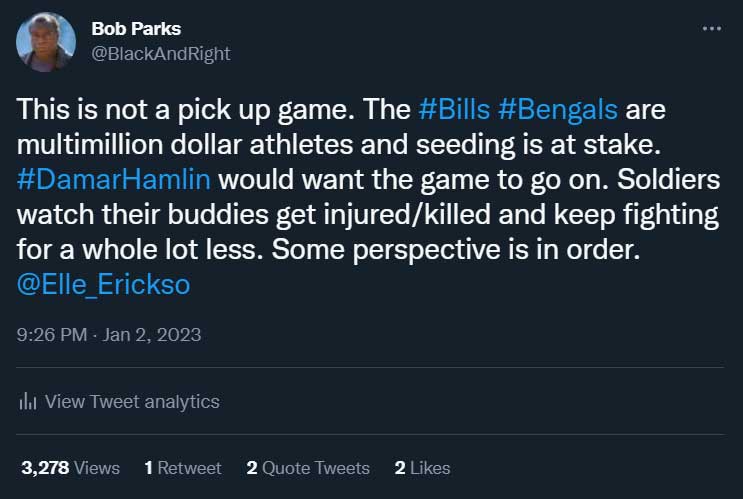 It was interesting witnessing, in real time, the Twitter mob calling for prayers for Mr. Hamlin. These are the same people who have no problem verbally assaulting any praying Christian who opposes any of their warped agendas. Yet now, praying is a good thing, in fact ESPN devoted many camera angles to Bills players praying for their teammate, as if this is an isolated, solemn event.

As it turns out, to avoid rupturing the fragile sensitivities of some viewers, liberal networks immediately end their broadcasts and never show what happens after almost every game: players from both teams, together, kneeling in prayer and giving thanks they made it through another Sunday relatively whole.

While serving on the USS Midway, I remember two catastrophic, peacetime events with loss of life. In each case, the carrier conducted searches for survivors before continuing on with the mission. And that pales in comparison to those fighting on the ground who witness their buddies being horrifically injured and/or killed. No one on Twitter called for the suspension of battles.

Did anyone on social media call for the suspension of the Afghanistan airlift after the bombing? You know, so that fellow soldiers could mourn? No. As in countless examples, our soldiers carried on their mission and received little genuine concern for their understandable mental health trauma.

In fact very few on Twitter even care that, to this day, we have veterans who are homeless and in need of financial assistance. (In case you wish to donate to a more-than-worthy and effective group that helps veterans in need, please go to Code of Vets.)

But I was dutifully reminded that there is a difference between war and entertainment.

Thanks for the tip.

Yes, there IS a difference. Soldiers are compensated at a very low rate of pay considering the possible risks. Professional football players are offered millions of dollars for their services and unlike soldiers, and can opt out of lucrative contracts any time. Athletes acknowledge the risks and most choose to take the money and assume those risks. Those who will remind us about the difference are clearly acknowledging that those who entertain us are more important than those who keep the nation safe, and let’s also not forget those underpaid police officers whom the Twits are quick to vilify.

As a matter of consistent disclosure, I am a lifelong New England Patriots fan and was watching the Bills-Cincinnati Bengals game because the outcome has a profound effect on our final game of the season, which just happens to be this coming Sunday in Buffalo. Most of those who were commenting on Twitter after the incident were not watching the game, merely reacted to what was “trending”, saw and reacted to #DamarHamlin, and to show what good people they are, decided to donate to his charity that provides Christmas gifts to underprivileged children.

When the game was officially postponed, a GoFundMe for his charity “Chasing M’s” started circulating through social media.

Charity is a good thing, when sincere. Seeing how we’re over a week removed from Christmas, where the hell were these benefactors before Mr. Hamlin’s injury?

As usual, it’s not all about the cause but about participants feeling good about themselves. Again, most of those commenting on social media were not watching the game as it was unfolding and know virtually nothing about the sport, team and players. One Tweet proved that point from one of the platform’s most notorious attention whores. 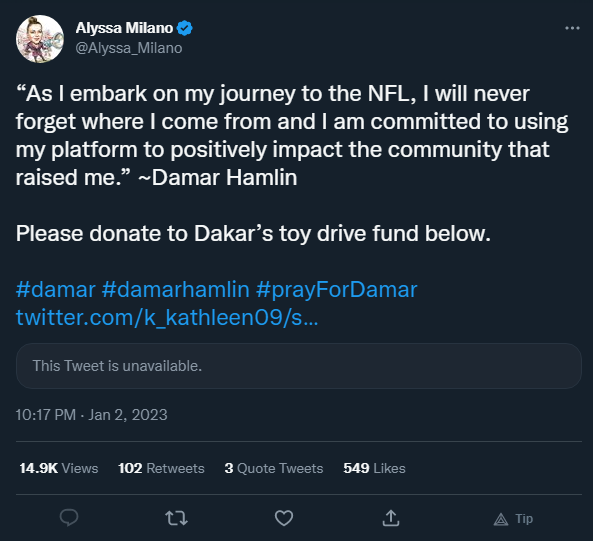 While making a point to tell others to belatedly donate to the toy drive, Alyssa Milano couldn’t even spell the man’s name correctly. What does that say about her knowledge of the topic and those involved?

There have been many sensational injuries in professional sports over the years, so this sudden concern for putting players first is so fake, especially coming from sports and some social media users. On any given Sunday, local and national sports segments highlight the best “hits” of the day and on YouTube, there are hundreds of video compilations of football collisions and hockey knockouts. In not one of those examples has a game been suspended, no matter how horrific the injury and emotional distress clearly displayed by the players and fans in attendance.

Look up the deadly Dale Earnhardt Daytona 500 crash, the football hit that left Darryl Stingley a quadriplegic, the infamous Joe Theismann leg break, goaltender Clint Malarchuk whose carotid artery and jugular veins were slashed during a hockey game, or the more recent Gordon Hayward ankle-snap heard through the stadium that left players and basketball fans in attendance visually disturbed.

In none of those cases was the race or games suspended or cancelled. In Earnhardt’s, Stingley’s, Malarchuk’s and Theisman’s case, the Internet as we now know it did not yet exist. In Hayward’s case, users on social media generously shared the video of him in justifiable agony. Teammates, in the latter cases, composed themselves as professionals and played on. And as the life-is-more-important game is being played, let’s not leave out the fan who was seriously injured by shards of a broken bat at Fenway Park. The game was resumed and completed.

It’s not clear if the Mensa class in the NFL front office and the Players Association thought through the ramifications of this precedent-setting decision to “suspend” the Bills-Bengals game. This didn’t just affect the two teams on the field and the suddenly-triggered on social media.

There are still five teams in the American Football Conference who, going into the last week of the season, have a chance at making the playoffs and last night’s game could’ve made a difference on whose season may have officially ended, and who will have to face who on Wild Card Weekend and seeding. The questions going forward are is last night’s game going to be replayed, will it be “erased”, and how fair will that be to all the affected teams? Anyone on social media even hinting at these very valid questions was mercilessly descended on like flies on shit.

And lastly, many on Twitter sought to shut down and threaten to “cancel” anyone who brought up anything about Hamlin’s vaccination and/or booster status. Over the last few years, many of the things we were told to ignore as “conspiracy theories” turned out to be true. Given the documented increase in Myocarditis in young, healthy vaccinated males and the many videos showing players dropping on the field, asking if Hamlin was recently boosted is a valid question. Most NFL players were required to get vaccinated and boosted and Buffalo’s own superstar receiver Cole Beasley missed all of last season because he refused to get vaccinated. He’s only played in a few games this season so that topic is even more pertinent within the Bills organization.

So have we now reached that pinnacle moment in professional football where estrogen has overtaken testosterone and emotions have supplanted the toughness the NFL promotes? Is any game now subject to suspension when a player gets hurt and who decides how bad that injury will be to stop a game? Other sports that have longer seasons may survive such instances but these decisions in a sport like football will have ripple effects that can impact teams and careers.

And to have it dictated by the sports-ignorant on social media would be the biggest travesty of all.

Now that the emotion has begun to subside, reality has now set in and the aforementioned precedent has now become the real issue.

Bengals executive vice president Katie Blackburn was not happy with playoff proposals approved by the NFL’s competition committee on Thursday night. She urged other members of the committee to vote against the approved scenarios in a memo obtained by ESPN’s Seth Wickersham.

“The proper process for making rule change (sic) is in the off-season,” Blackburn wrote. “It is not appropriate to put teams in a position to vote for something that may introduce bias, favor one team over another or impact their own situation when the vote takes place immediately before the playoffs.”

Blackburn’s main issue is that the traditional standard of seeding in this scenario is getting thrown out in the middle of a season.
— Sports Illustrated, 1/6/23

Maybe those who demanded I either take down or rewrite the headline of this post, now take the time to reread what I wrote and maybe see that this wasn’t meant to be insensitive to the injury of Damar Hamlin just because I didn’t join the chorus of emotion over ramifications. The decision made last Monday night soothed the immediacy of emotions of the broadcasters and social media and created the predicted clusterfuck.

The Buffalo Bills are officially out of contention for the No. 1 seed in the AFC playoffs, as the Kansas City Chiefs and quarterback Patrick Mahomes trounced the Las Vegas Raiders in a 31-13 win at Allegiant Stadium on Saturday to secure home-field advantage and a first-round bye.
— Sports Illustrated, 1/7/23

It turns out, the cancellation had everything to do with how a long-fought season would end for one deserving team, clearly screwed by those in the NFL and NFLPA who should have had leveled heads at a time when they were sorely needed.

The cancellation helped the league avoid late-season logistical nightmares. As for the Bengals, playing 16 games instead of 17 did guarantee them the AFC North title, but it also meant that they no longer had a shot at the No. 1 seed.
— Sporting News, 1/8/23

What would happen in the days to follow was never considered and that’s why we find ourselves where we are now.