Ben Carson and the ‘National Coalition for Homeless Veterans’ Sideshow

Veterans continue to be fundraising props for liberal nonprofits and those they need to suck up for even more federal grant money, despite the fact that actually achieving their so-called missions would end their need to exist.

In 2016, Virginia Governor Terry McAuliffe started the lie that his state “functionally ended” veteran homelessness and sadly, President Trump’s HUD Secretary repeats the expanded version of that lie to this day. Most recently at the National Coalition for Veteran Homelessness “Annual Conference” on May 31, 2019 to an audience that looked like they had other things they’d much rather be doing….

It would have been preferred if Secretary Carson consulted with someone like Walter Williams and done an audit of the effectiveness of the nonprofit sector, especially when it comes to homeless veterans. Are they effective or are they essentially making life harder for veterans in order to keep the donor dollars and grant money coming in so those at the nonprofits can continue to live their comfortable lives?

Notice of Funding Availability: GPD Grant Applications Due May 20
The Department of Veterans Affairs (VA) is announcing the availability of funds to eligible entities to provide time-limited case management services to improve the retention of housing by Veterans who were previously homeless and are transitioning to permanent housing from…continue
— National Coalition for Homeless Veterans website

While Carson and others pat themselves on the back at how readily available VASH (Veterans Affairs Supportive Housing program) vouchers are to homeless veterans who need them, the reality on the ground is entirely different. HUD employees who do the “intake” with veterans seldom display or act in any sense of urgency. The perception is that most veterans in need of VASH vouchers have drug, alcohol and/or psychological issues but in too many instances, these “issues” arise only after dealing with the fat and comfortable government employees and nonprofits who are very good at telling the veteran what they can’t do after the lengthy intake process and direct them to other entities that also tell them what can’t be done. Veterans who are fortunate to have received the VASH voucher are then subjected to humiliating “case management” that keeps more employed and fed at the veteran’s expense, seeing how not all veterans are in need of condescending babysitting.

We’ve also heard that VASH vouchers not offered to homeless veterans are rolled into the Section 8 program for local dispersal to those deemed most needy and deserving, like immigrants and refugees.

Keeping in good with the grant issuers appears to be doing right by the National Coalition for Veteran Homelessness.

While claiming to respect and care for veterans, this year’s NCHV annual conference theme said it all: homeless veterans are nothing but “data” they can use to justify more money to fund their nonprofit salaries and overhead (including the immodest ±$300k cost of a three-day “annual conference” at the Grand Hyatt Hotel, Washington, D.C.). 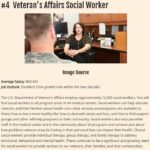 As far as the glowing reviews, we still have “case workers” (the vast majority non-veteran) who for the most part are not the most motivated, and government employees who set veterans up for letdowns more than they achieve results, and if they do, it’s a very lengthy process.

BTW — A “Veteran’s Affairs Social Worker” is the #4 “Highest Paying Jobs in Social Work“. #5 is “Executive Director of a Non Profit Organization”….

And “saving the best for last” is another Democrat hack who’s used the nonprofit route to elevate herself, using her veteran status to carve out a niche in supposedly helping homeless female veterans, despite her “Women Veterans Interactive” having $0 in income and assets while receiving grant funding in the past.

Secretary Carson may only be regurgitating the oft-repeated liberal lie of veteran homelessness being “functionally ended” because we all know how employees tend to put the best face on projects for the boss. But until homeless veterans are not looked at as golden goose opportunities to keep career welfare alive in the nonprofit sector in particular, there will be justified need for all the case managers and social workers.

Lastly, a commonly-used justification for the nonprofit and/or VA caseworker class is the slander that too many homeless veterans suffer from post-traumatic stress disorder. But it’s never honestly discussed where the PTSD originated because the truth is inconvenient.

At the point of separation from the military, 2.4% of all Veterans and 9.3% of subsequently homeless Veterans were diagnosed with PTSD.
— Homelessness and Risk Factors for Homelessness Among Veterans from the Era of the Afghanistan (OEF) and Iraq (OIF/OND) Conflicts

However, the truth is never publicly mentioned by the comfortable for obvious reasons.

Dealing with those who promote, promise much and dash hope will do it every time.

A veteran in need will be driven to alcohol, drugs and may even consider suicide because dealing with those who receive taxpayer dollars to care and deliver results don’t have to.