It’s been used as a basis for all of the “climate change” hysteria we’ve all had to endure over the last decade plus. 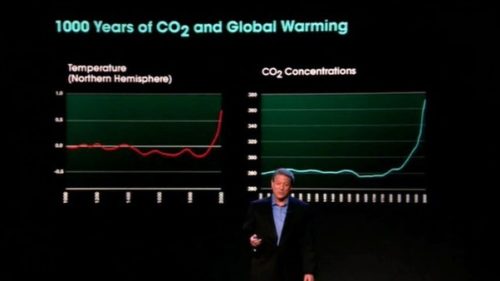 It was used as a visual aid during Al Gore’s propaganda piece “An Inconvenient Truth”; the only problem is that was yet another simple case of garbage in, garbage out.

Mann’s “hockey stick” graph, first published in 1998, was featured prominently in the U.N. IPCC 2001 climate report. The graph showed a spike in global average temperature in the 20th Century after about 500 years of stability. Skeptics have long claimed Mann’s graph was fraudulent.

Climate change skeptic Dr. Tim Ball called Mann out and as we all know, liberals have no sense of humor when they’re the butt of the joke.

Professor Mann is a climate professor at Penn State University. Mann filed his action in 2010 for Ball’s allegedly libelous statement that Mann “belongs in the state pen, not Penn State.”
— ClimateChangeDispatch.org, 8/24/19

After years of lawsuits, bolstered by years of Mann’s failure and/or reluctance to offer his hockey stick-climate change research into a courtroom for scrutiny, his case was finally thrown out of court and Mann was required to pay Dr. Ball’s court costs. In reality, this is a VERY big deal, given the media, activist, political craziness that essentially arose from bad data.

In 2003 a Canadian study showed the “hockey stick” curve “is primarily an artifact of poor data handling, obsolete data and incorrect calculation of principal components.” When the data was corrected it showed a warm period in the 15th Century that exceeded the warmth of the 20th Century.

And Dr. Ball’s victory was not just a monetary price paid….

Dr Ball, now affirmed as a courageous champion of honest science, has assured his place in the annals of real climate science. His gift to the world was sacrificing eight of his senior years, when he could have been enjoying his retirement, to exposing key players in the biggest science fraud of all time.
— Principia-Scientific.org, 8/23/19

How huge is this really?

Given the near total blackout of media coverage on this lawsuit resolution, like the Trump-Russia-collusion hoax, some people will never admit they were wrong, especially when millions of taxpayer dollars in the form of education and research grants are at stake. Let’s not even include the political rhetoric surrounding all things “climate change”. Too many people, colleges, laboratories, and activist dot orgs have much to lose should the world ever come to grips with the fact that a disproportionate few are eating quite well off lies.

In his own words, Dr. Tim Ball explains the genesis of the multiple failed lawsuits against him, the use of SLAPP lawsuits to silence any kind of dissent, the lie called that “97% consensus”, the origin and intent of the United Nations’ tyrannical Intergovernmental Panel on Climate Change, and the implications for the “climate change” debate, going forward.

Yet another Thank You to Dr. Ball for (as he has done for us many times over the last decade plus) generously giving us his valuable personal time to do what he’s always done best: teach.