Despite all you may think you know about any entity whose name ends with “dot org”, the vast majority of nonprofits, especially liberal nonprofits, are NOT about achieving a mission. It’s really about job security for those good at separating the wealthy, bleeding hearts from their money.

Before getting guilt-tripped into giving any kind of donation, take a very discerning eye at that nonprofit. With very few exceptions, their missions are intentionally unachievable because to complete the mission would put them out of business.

For example, we’ve researched many of the so-called veteran and homeless nonprofits just to find they offer minimal real help to those they claim to care about, while the mostly white-and-fat executive-tier are quite well compensated in the mid six-figures, their opulent offices are in high-rent areas, and they routinely host lavish fundraising galas where minorities are mostly showpieces and give back-patting, feel-good Lucite statuettes to themselves.

BTW — Have you ever heard ANY nonprofit address what happens to the interest earned by the donation money in the bank or whom it may be going to in the form of bonuses? Just askin’….

After the election of President Trump, most liberal nonprofits went into high gear for donations while their missions remain intentionally-vague or based on perpetuated fear-based, false stereotypes.

The hours following the election of Donald Trump as president of the United States has left many feeling speechless, helpless, and utterly devastated. An easy way to take action right now is to learn more, get involved, and donate, your money and your time, to progressive organizations like the ACLU and Planned Parenthood, among many others.
— WMagazine, 11/9/16

Various news websites even went as far as presenting a list with links to liberal nonprofits that should be given cash consideration; lists of 501 (c)(3) nonprofits that are (by IRS law) supposed to be apolitical. Then again thanks to the activities of Lois Lerner, we all know IRS law was (and continues to be) selectively enforced in favor of the left.

The American Civil Liberties Union
Mission: To defend and preserve the individual rights and liberties guaranteed to every person in this country by the constitution and laws of the United States.

Border Angels
Mission: A San Diego based non-profit that advocates for human rights, humane immigration reform, and social justice with a special focus on issues related to issues related to the US-Mexican border.

MoveOn.org
MoveOn is the largest independent, progressive, digitally-connected organizing group in the United States. We are constantly innovating how we organize at scale and work together to win the biggest campaigns of our time— ending the Iraq War, electing Barack Obama president, enacting health care reform, and taking down the Confederate flag from the state house grounds in South Carolina. 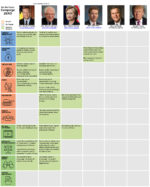 The Center for Reproductive Rights
Mission: To promote and defends the reproductive rights of women worldwide.

The Coalition for Humane Immigrant Rights of Los Angeles (CHIRLA)
Mission: To advance the human and civil rights of immigrants and refugees in Los Angeles. 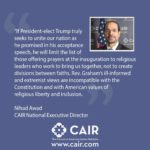 The Council on American-Islamic Relations (CAIR)
Mission: A Muslim advocacy group working to promote a positive image of Islam and Muslims in America.

National Organization for Women (NOW)
Mission: To take action to bring women into full participation in the mainstream of American society now, exercising all privileges and responsibilities thereof in truly equal partnership with men.

The New York City Alliance Against Sexual Assault
Mission: To build the capacity of communities, organizations, and institutions to advance the right to live free from sexual violence and reduce the harm it causes individuals, families, and society.

Planned Parenthood
Mission: A nonprofit organization that provides reproductive health services both in the United States and globally.

She Should Run
Mission: A national network changing culture to inspire more women and girls to run for office.

The Young Center for Immigrant Children’s Rights
Mission: To promote the best interests – safety and well-being – of unaccompanied and separated immigrant children in the United States.

Prior to even considering giving any of these nonprofits a donation, one shouldn’t have to dig deep to get the answer to “How will you do that?”

Almost all of the above, premiere liberal nonprofits have missions that will never be met, which is really what it’s all about, and from time-to-time we hear about those who’ve used their nonprofits for their personal financial enrichment and been appropriately busted.

While there may be less than a handful of nonprofits that actually treats those they claim to be advocates of with dignity and respect, most look down on their “cases”.

And as most of the liberal nonprofits are funded indirectly by the likes of George Soros, they are created to generously reward through employment prominent pundits, former staffers of Democrat politicians, and activists. Their promotionals and publications predominantly feature black people, minority women and children. They tug at bleeding hearts and ultimately, wallets.

Aside from providing tax shelters for the liberal uber-rich and really good-paying jobs for a select few, what are they really good for?