Ah, the drama that is April Ryan continues.

April Ryan, the White House correspondent for American Urban Radio Networks, has hired a personal bodyguard after receiving death threats she claimed were the result of the Trump administration’s vilification of her as a reporter.

There’s almost always skepticism whenever we hear of someone in the news claiming to have received “death threats”. That’s not to say it didn’t happen, but there are ways to handle it like publishing those threats for all the world to see, not to mention providing the names and other personal information if so desired. We know from experience that has a way of chilling those vile incoming messages when the sender understands his or her accounts can also be added to the public record.

And since she’s SO important, it needed to be kicked up a notch.

“Do I have a bodyguard? Yes, I do. Am I paying for it? Yes, I am. And, I think [White House press secretary Sarah Sanders] should have to pay for it, especially if she’s stirring it up with her boss,” Ryan said in an interview published Tuesday by the Hollywood Reporter.
— Washington Examiner, 8/21/18

We assume having one’s own bodyguard is an extraordinary expense, April probably earns enough that she can comfortably afford one, though an employer would absorb that cost to assure an employee’s safety. That is, if the need is genuine and not drama introduced because of someone’s unreasonable sense of self-importance.

Ryan, who is promoting her forthcoming book “Under Fire: Reporting from the Front Lines of the Trump White House,” did not state why her employer is not covering the costs.

That would be a pertinent detail.

Her speaking contracts ban video and audio recordings, a provision designed to ensure that her voice and image aren’t used by rival networks. She declined to comment.
— Washington Post, 8/15/19

Oh, puhleez. Like her likeness and words are that unique and profound.

There are some people in the pundit class (and we’ve run into them) who believe they are SO important they can dictate who can and cannot record their likeness at events; events where people with smartphones could record them in a rather stealth mode while professionals with tripods in full view are singled out for their audacity in not getting prior personal permission.

As Ryan began speaking, she kept staring at Kratovil’s camera in an odd manner. Soon after, her security guard approached her, and she signaled for him to do something.
— BizPac Review, 8/10/19

Kratovil claims he was approached by a man, who he said he later found out was Ryan’s security guard Joel Morris.

Kratovil alleged that Morris threatened to “take… down” the camera if he himself didn’t and the public relations team began “pressuring” Kratovil to stop recording. In emails obtained by Fox News, Kratovil had previously RSVP’d to the event and received confirmation.

Kratovil expressed his solidarity with Ryan, an outspoken critic of President Trump and his treatment of the press, but told Fox News that “her reputation” now depends on addressing what had happened and is hoping for an apology.
— Fox News, 8/14/19

Good luck with that as it appears Ryan and most of the media wanted this whole thing to go away simply by not reporting it as timely as it would have been had a black reporter been muscled out of a conservative event.

It took about a day and a half for George Holliday’s video of the Rodney King beating to make the jump from local to national news because there really wasn’t a consumer Internet in 1991. This incident happened a week ago and we’re only really hearing about it now?

Is this what we’d call a media blackout, pardon the pun?

“When I speak, I don’t have news covering my speech.”
— April Ryan

One would think April Ryan would know all about the importance of granting free and unfettered access to the media for any and all newsworthy events… including HERS. 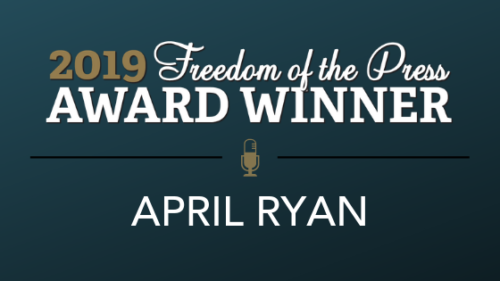 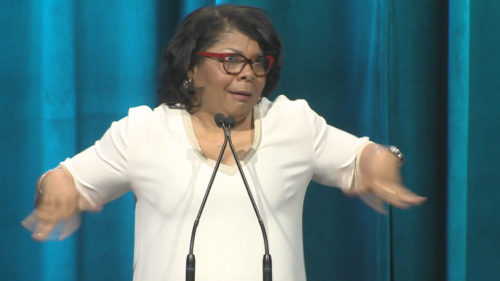 Bloomberg White House Correspondent Margaret Talev also said honoring Ryan with a Freedom of the Press Award is not just a recognition of one reporter’s work and advocacy for press freedom, but has a wider impact for journalism.
— Reporters Committee for Freedom of the Press

April Ryan is also a CNN political analyst and liberal cable news regular so she probably pushes those over her Urban Radio gig, thus she may really believe she’s all that.

Let’s hope that this isn’t an media elite example of black privilege, charges have been filed and the media is not given any more room to run roughshod over independent news outlets or the public in general.

As at least one person would have hoped, this whole incident didn’t go away quietly.

A criminal complaint dated August 19 charges 30-year-old Joel Morris of Country Club Hills, Illinois, with harassment, assault and theft. It alleges Morris took Kratovil’s arm and shoved it behind his back, injuring his forearm and shoulder.

“While journalists may have no special rights superior to members of the public, they do not have fewer rights than others,” the Society of Professional Journalists said in a statement. “A no-photography policy should apply to everyone. Nor should the perceived viewpoint of a news organization be regarded as grounds to deny admittance to a member of the media; people who make news do not have a license to dictate how and by whom they are covered.”

Ryan did not immediately return a request for comment Monday afternoon. “Her silence is deafening at this point. It’s been more than two weeks,” Kratovil said. “Anybody who’s a journalist should be condemning this.”
— NewJersey.com, 8/19/19

Interesting how one of the biggest mouths on cable news can keep her mouth shut when it suits her.

Let this be a lesson to April Ryan’s next bodyguard….

CNN political analyst April Ryan this weekend finally addressed an Aug. 3 incident involving a member of her security detail forcibly removing a journalist from an event at which she was speaking. It took the 2019 Freedom of the Press Award-winner and White House correspondent only 22 days to break her silence.

Ryan claimed Sunday on CNN that the Aug. 3 episode was the fault of an overeager, and since-fired, bodyguard named Joel Morris.

This should be fun.