Gay activists got what they wanted and yet, they are seemingly on a constant lookout for the new pound of flesh….

Brendan Eich is gone. The creator of JavaScript and co-founder of mozilla.org has quit as Mozilla’s CEO, forced out by the uproar over a donation he made six years ago to a ballot measure against gay marriage. There’s no record of Eich discriminating against gay employees—”I never saw any kind of behavior or attitude from him that was not in line with Mozilla’s values of inclusiveness,” says the company’s chairwoman, Mitchell Baker.

It’s beyond old being lectured on the virtues of “tolerance and inclusion” by the very people who routinely exhibit the most intolerant of traits.

It was like being at a klan rally except the klansmen were wearing Abercrombie polos and Birkenstocks. YOU NIGGER, one man shouted at men. If your people want to call me a FAGGOT, I will call you a nigger. Someone else said same thing to me on the next block near the temple…me and my friend were walking, he is also gay but Korean, and a young WeHo clone said after last night the niggers better not come to West Hollywood if they knew what was BEST for them.
— Geoffrey, a black, gay, UCLA student, 2008

Many of us have said we’d like to have witnessed that WeHo showdown. 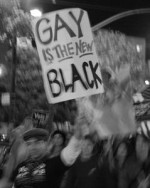 For all the talk of inclusion, there’s nothing that makes me believe the gay left is any less inherently racist than progressive Democrats, and those on the ground in 2008 kind of backed that up.

There’s nothing a white gay person can tell me when it comes to how I as a black lesbian should talk to my community about this issue. If and when I choose to, I know how to say what needs to be said. Many black gays just haven’t been convinced that this movement for marriage is about anything more than the white gays who fund it (and who, we often find, are just as racist and clueless when it comes to blacks as they claim blacks are homophobic).

“Purging” society of those who disagree is the kind of obsession that can only be fueled by hate and only a crazy person believes their hate is nobler than someone elses’ or an even crazier person who doesn’t believe their hate is hate at all.

Let’s hope the LGBT activists are happy Mr. Eich resigned. They seem even more happy witnessing the pain of others even after achieving their victory.

Just what does that really say about them and their “movement”?