The Tyranny of a Liberal Judiciary is Nothing New

Consuming the news coverage of the judicial response to President Trump’s immigration “ban” is illustrative because the majority of those doing the “reporting” act like this is such uncharted territory because THEY have never seen anything like this. 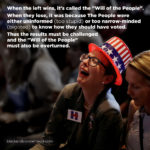 But for many of us who’ve been politically aware before 2008, judges overruling the will of the people is nothing new, in fact it’s a tried-and-true, expected liberal reaction to anything they don’t like, so let’s go a few years back and you’ll see the pattern.

There actually came a time in the great state of California where the residents had enough of the Mexican illegal immigration-invasion, specifically the fiscal, social costs and crime ramifications taxpayers are forced to endure, and the topic was put to statewide referendum.

California Proposition 187 (also known as the Save Our State (SOS) initiative) was a 1994 ballot initiative to establish a state-run citizenship screening system and prohibit illegal aliens from using non-emergency health care, public education, and other services in the State of California. Voters passed the proposed law at a referendum in November 1994.
— Wikipedia

Using the most direct optics as a gauge, one would think the proposition lacked support, as one mostly saw anti-187 bumper stickers everywhere. However that may have been because the few cars that did display “Yes on 187” stickers were vandalized to varying degrees. That looming threat to personal property had a visually chilling effect but it appears to also have galvanized and certified the resolve of those who were tired of living in the illegal Mexican culture.

This is NOT anecdotal. I lived in the San Fernando Valley during the 90s and witnessed this first hand. 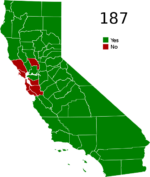 Proposition 187 passed. The “will of the people” was heard, liberals didn’t like the result, so guess what happened? They found a judge to proudly nullify near nine million voices.

The constitutionality of Proposition 187 was challenged by several lawsuits. On November 11, 1994, three days after the bill’s passage, Federal Judge W. Matthew Byrne issued a temporary restraining order against institution of the measure, which was filed by State Attorney General Dan Lungren. After Judge Mariana Pfaelzer issued a permanent injunction of Proposition 187 in December 1994, blocking all provisions except those dealing with higher education and false documents, multiple cases were consolidated and brought before the federal court. In November 1997, Pfaelzer found the law to be unconstitutional on the basis that it infringed on the federal government’s exclusive jurisdiction over matters relating to immigration.

Ironic considering how liberal judges in Washington state today are infringing on the federal government’s exclusive jurisdiction over matters relating to immigration. 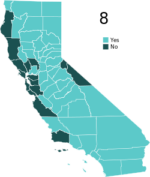 Prior to events in Massachusetts, EVERY state that held a referendum on gay marriage voted against it and by healthy margins. The left, however, believed the popular vote was NOT a good barometer of public sentiment that should be respected and when such a referendum was offered in California, it was time to pounce again.

Prop 8, officially titled Proposition 8 – Eliminates Right of Same-Sex Couples to Marry, was a statewide ballot proposition in California. On November 4, 2008, voters approved the measure and made same-sex marriage illegal in California.
— Ballotpedia

Of course, all it took was a friendly liberal judge and court to overturn the will of over seven million voters. 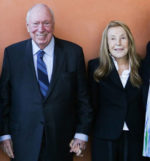 The proposition was almost immediately challenged and ultimately overruled by the Ninth Circuit and the opinion written by a proven liberal judge who just happened to be married to the Executive Director of the ACLU of Southern California. But we all know that had absolutely NO influence on his independence as a federal judge because liberals and their integrity are beyond reproach….

On February 7, 2012, a three-judge panel on the Ninth Circuit Court of Appeals issued a 2–1 majority opinion affirming the judgment in Perry v. Schwarzenegger, which declared Proposition 8 unconstitutional, saying it violated the Equal Protection Clause. The opinion, written by Judge Stephen Reinhardt and joined by Judge Michael Hawkins, states that Proposition 8 did nothing more than lessen the status and dignity of gays and lesbians, and classify their relationships and families as inferior to those of opposite-sex couples. The court found that the people of California, by using their initiative power to target a minority group and withdraw the right to marry they once possessed under the California State Constitution, violated the federal Constitution.
— Wikipedia

By the way, blacks overwhelming voted against Prop 8 and as a result, gay racism became justified thus publicly acceptable.

In two very notable initiatives, the same liberals who decry the election of Donald J. Trump because they claim the popular vote was ignored in favor of an antiquated Electoral College, have used the courts to blow off the popular vote on numerous occasions when it didn’t go their way. Sometimes they observe the jurisdiction of the federal government and sometimes they don’t.

With that, it’s no wonder they’re freaking out. The world they’ve mandated us to live under is being torn apart, they’re technically powerless to stop it, so let’s not act like what’s going on now with the judicial obstruction to President Trump’s “extreme vetting” of refugees attempting entry into the United States is unprecedented. 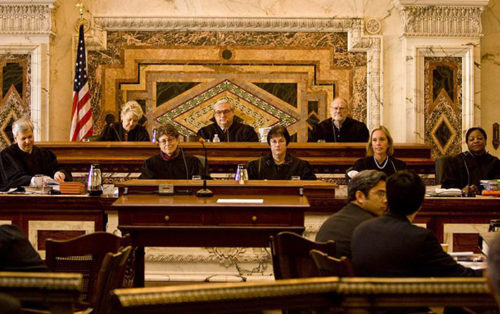 The only obstruction club they have left are the judges, for now….