The left and their media are quick to sanctimoniously remind everyone that tragedies are not to be politicized. We’re all to come together in times of disaster and help those in dire need.

Of course, there are always two sides to every story.

I don’t know why she is saying that. What I can tell you is my experience.

As we’ve shared earlier, some politicians have used the hurricane aftermath in Puerto Rico for blatant self-promotion and it now appears there are actually government elected and employees who may be hoarding the life-saving supplies sent from the U.S. mainland.

It would be politically incorrect and probably racist to conclude systemic corruption is the island’s culture, but it clearly is.

“This morning we received information from a town on the Island where a person close to the municipal administration was asking one of our federal agents that the supplies that were there could not be touched because they were for his mayor,” said federal prosecutor Rosa Emilia Rodriguez, who then indicated that the case is already being investigated.

She added that he also received confidences from another islander whose official was also keeping supplies for “constituents who had voted for that person. This is not the time to do politics … this is the time to help and to be kind to others. This is a tragedy and nobody should take advantage of the aid, “said Rodriguez, adding that if they manage to prove the indications, the accusations will arrive “no matter which party, or whoever. “
— Metro, 10/9/17

Be very skeptical of the screeching media, demanding to know why aspects of FEMA recovery efforts aren’t happening as fast as they determine it should be. The answer is one they can’t allow the American taxpayer to hear and Democrat Party to answer for.

For the last 30 years, the Puerto Rican government has been completely inept at handling regular societal needs, so I just don’t see it functioning in a crisis like this one. Even before the hurricane hit, water and power systems were already broken. And our $118 billion debt crisis is a result of government corruption and mismanagement.

Watch out what relief funds you approve and let our local government handle. Don’t let the Puerto Rican government play the victim and fool you. They have no clue what they are doing, and I worry that they will mishandle anything that comes their way.

It looks like Mr. Rodriguez was spot on and the misleading media isn’t helping either. 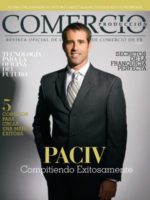 I’m really tired of Puerto Rican government officials blaming the federal government for their woes and for not acting fast enough to help people on the island. Last week I had three federal agents in my office and I was so embarrassed; I went out of my way to apologize to them for the attitude of my government and what they have been saying about the US response. When the hurricane hit we had experts from FEMA from all over the US on the ground and I was really proud of their quick response. The first responders and FEMA have all been outstanding in this crisis, and should be supported.

I have 50 engineers that I have sent out pro bono to help local companies get back on their feet. This includes getting people gasoline and cash, and helping them connect to others that can assist with repairs without delays.

I won’t allow my people to work with the local government.
— Jorge Rodriguez, CEO of PACIV

Name one journalist (who’s probably never heard of Ohm’s Law) that can tell you how and why electricity comes from a pole into their home, let alone know where to start rebuilding a damaged power grid.

CNN: Fewer Puerto Ricans have power restored than a week ago
NY Times: 84 Percent of Puerto Rico Still Doesn’t Have Power
WaPo: Is it lights out for Puerto Rico?

But if it’s about whining about the president’s direction and FEMA’s efforts, they know just what the people need to hear.

While the professional, partisan media tells the American people that Puerto Rico essentially remains in the dark, reality on the ground is another thing.

The executive director of the Electric Energy Authority (AEE), Ricardo Ramos, said Wednesday that the country has light in most of the municipalities, with the exception of the southeast and central strip of the island.

Ramos, speaking at a press conference at the Convention Center, also said that the public corporation “is going to meet the goals” established by the governor Ricardo Rosselló Nevares, who indicated that that agency must have energized by 95 percent the country the 15th of December.
— Metro, 10/18/17

The media and partisan politicians lying to the American people is something expected. Intentionally causing physical misery for political gain is also expected of Democrats, no matter how benign-to-lethal that misery will be.

The Mayor of San Juan, Puerto Rico, said Wednesday that bureaucracy and inefficiency across local and federal government entities are to blame for the deaths of nearly 3,000 on the island in the wake of Hurricane Maria, which came to light as part of a newly released study commissioned by the Puerto Rican government. In particular, Mayor Carmen Yulín Cruz blamed President Donald Trump, federal officials and Puerto Rican officials for not providing more assistance in what the Puerto Rican government now acknowledges was a storm deadlier than Hurricane Katrina.
— CNN, 8/29/18

Unfortunately, we may never know just how many lives may have been saved if the aid intended for the people wasn’t intercepted and hoarded for the politically-privileged Democrat government officials, friends and families. 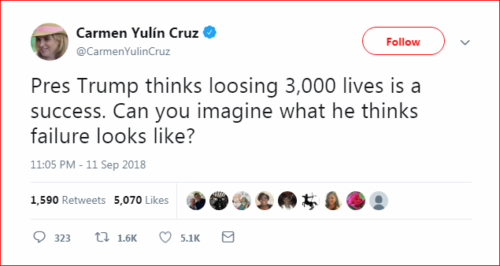 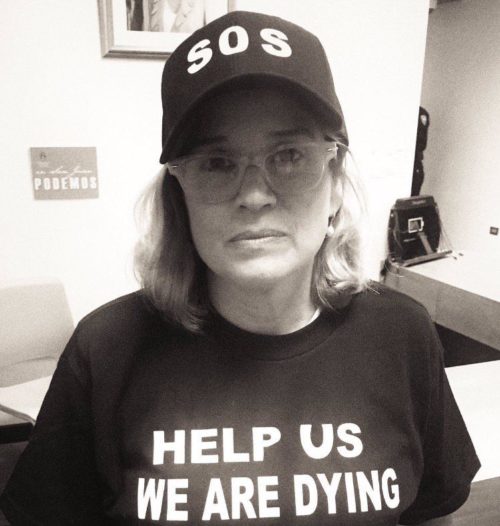 Of course if all you had to go by was the #FakeNews media, “3,000” was an easily-recitable round figure.

But as in anything, it all depends on what you want the public to believe based on whose “facts” you decide to credit. 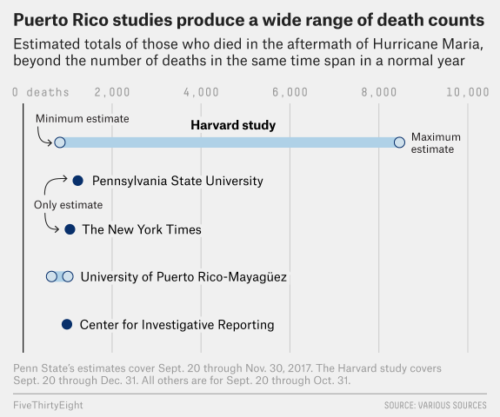 Puerto Rican authorities report only 64 deaths from Hurricane Maria, the worst storm to hit the island in nearly a century. But statistical estimates point to many more victims.
— Royal Statistical Society, 2/6/18

• The New York Times calculated 1,052 deaths through October.
• The Center for Investigative Reporting calculated 985 through October.
• University of Puerto Rico-Mayagüez professors calculated 822, with a 95 percent confidence range that the total was somewhere between 605 and 1,039.
• Pennsylvania State University professors calculated excess deaths of about 500 in September, or a total of 1,085 if the same pattern held in October. That estimate was based on six weeks of mortality records.
• A Latino USA analysis, using updated data from Puerto Rico’s Department of Health, calculated 1,194 excess deaths in September and October.
• The Harvard T.H. Chan School of Public Health researchers posted a document that includes this question: Does your study say that 4,645 died? The answer: “No. We provide a 95% confidence interval of 793 to 8,498, and 4,645 falls in the middle of this range.”
— Washington Post, 6/1/18

Given the situation on the ground, the death count is understandably all over the place as opposed to the “3,000” number many lock onto for political anti-Trump expediency, which incidentally appears nowhere in the studied estimates.

While some are trying to make the case that Puerto Rico deserves statehood status, some of the long, underreported fraudulent behavior of local officials keeps rearing its ugly head.

Three officials with Puerto Rico’s Senate were arrested by FBI agents Thursday and later charged by the U.S. territory’s federal prosecutor with alleged corruption for a case involving a scheme to defraud the legislature using “ghost employees.” Federal prosecutor Rosa Emilia Rodríguez said 18 charges were brought against Ángel Figueroa Cruz, director of the Senate Office of Government Affair; Isoel Sánchez Santiago, an assistant to the Senate president; and Chrystal Robles Báez, a contractor to the body.

The purported scheme involved the accused billing the Senate for professional services that were never provided.
— Associated Press, 5/30/19

I’m sure you haven’t heard as much compared to the eager coverage Mayor Cruz enjoyed while attacking the president for not sending more money to the island. Here’s another reason why….

Note: whenever you hear “federal and local funds”, replace those words with “taxpayer dollars”.

Federal authorities said that Mayor Miguel Ortiz is accused of defrauding the federal government of nearly $3 million in a separate scheme that began in 2013 and ended in 2016. Officials said he is accused of financing projects without prior approval from Puerto Rico’s Department of Education and obtaining funds after misrepresenting the projects’ cost.
— New York Daily News, 7/7/19

And let’s not leave anyone out.

Puerto Rico’s former secretary of education and five other people have been arrested on charges of steering federal money to unqualified, politically connected contractors.

Let’s face it: Puerto Rico is run like your stereotypical, graft and corruption-laden banana republic and until they’re forced to clean up their act, they don’t deserve statehood, let alone any more taxpayer money from Americans.

Corruption appears to be so bad in Puerto Rico that it continues when you’d think reasonable people would lay low…. 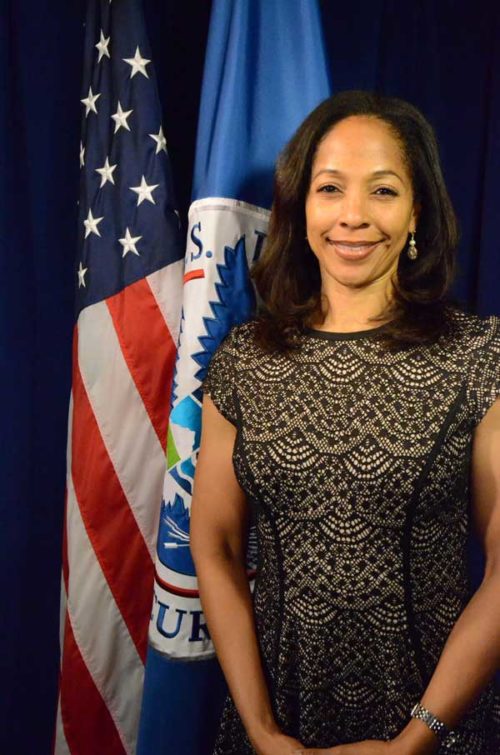 Ahsha Nateef Tribble, administrator of FEMA region 2 – in New York – and assigned to the emergency in Puerto Rico after the impact of hurricanes Irma and Maria, was arrested this morning in Florida for conspiracy to bribe public officials, electronic fraud and fraud to disaster funds, in relation to the contracts granted by the Electric Power Authority (PREPA) to the company Cobra Acquisitions, LLC.

Agents of the Federal Bureau of Investigation ( FBI ) also arrested Donald Keith Ellison, former president of the company that was to work on the repair of the island’s electrical system; Jovanda R. Patterson, a former FEMA assistant assigned to San Juan, confirmed the head of federal prosecutor Rosa Emilia Rodríguez-Vélez during a press conference.
— El Nuevo Día (The New Day), 9/10/19

While this is being initially being portrayed as gross incompetence, it could also be another case of Puerto Rico government official hoarding.

Puerto Rico Gov. Wanda Vazquez dismissed the island’s director of emergency management after a warehouse was discovered with supplies dating back to Hurricane Maria.

Video published Saturday showed a warehouse in the southwestern city of Ponce filled with supplies, including thousands of cases of water, believed to have been from when the hurricane struck the island in 2017. Carlos Acevedo, before his firing, said in a statement: “It is important to emphasize that no citizen has been denied any of the items found at this place.”

The person who took the video of inside the warehouse “violated the security perimeter,” he added.
— ABC News, 1/18/20

So, had it not been for the person who video documented the corruption, no one would know and Acevedo would still have his job.