It continues to amaze what one can, at least, attempt to get away with if you’re a Democrat. Sexual harassment, homophobia, mouthing off to law enforcement; it’s all in the family and the political machine will cover for you.

The latest example comes from Denver, Colorado, their black mayor and his gangsta rapper-wannabe son.

Police body camera video shows the son of Denver Mayor Michael Hancock using a slur against an Aurora police officer during a traffic stop. In a video leaked to Denver7, it shows 22-year-old Jordan Hancock saying his dad is the mayor cussing at the officer.

When you’re a Democrat, all it takes is an apology.

If you’re a privileged Democrat while black, you also get a few chances…

Denver Mayor Michael Hancock has been accused of sexual harassment by a former member of his security team. Hancock released a statement of apology Tuesday.

Hancock said in an interview on Tuesday night that he blurred the line between being a friend and a boss. The mayor also said he is not going to resign.
— KDVR, 2/27/18

… No one is going to hold you accountable…

Denver Mayor Michael Hancock appears unlikely to face any real consequences for the sexually suggestive text messages he sent to a police officer on his security detail six years ago.

There’s a whole system set up to handle sexual harassment incidents between city of Denver employees. The city tells 9NEWS that if anyone complained about the mayor, the grievance would likely be denied outright, or just given to the mayor for his response.

In the case of Hancock, the city’s human resource department tells us that if someone filed a complaint against the mayor, that complaint would likely be denied, or sent to the mayor’s office for a response. And that’s it. Essentially, that means no recourse at all, unless a mayor chose to fire him or herself.
— KUSA Denver, 3/1/18

Must be nice to be mayor in Denver. 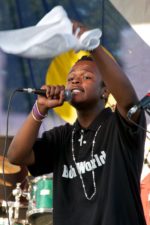 In the 2011 photo, Jordan Hancock can be seen whooping it up following the inauguration of Michael Hancock, his father, as Denver’s mayor. But there’s no celebration in regard to his latest moment in the spotlight. The nineteen-year-old was allegedly in an SUV in Fort Collins when a companion, Jalen Marquise Robinson, was shot in the back of the head.

The other passengers insisted no one in the SUV had a gun and maintained that the shot had come from outside. However, one of ten occupants in a second SUV that had followed the ride driven by Rashaun Marshall said he thought the shots had come from inside the vehicle — and that’s the theory investigators came to believe, too.
— Westword, 10/7/14

In the politically-correct, liberal white guilt universe, black people can’t always be held accountable for doing bad things to each other. The Hancocks will be excused because rules the left has imposed as holding them responsible for their actions would be deemed oppressive racism.

It’s only a matter of time before we hear from Mayor Michael B. Hancock and his son Jordan again.

It was only a matter of time and the expected message was sent to the appropriate law enforcement agency and the public as a whole.

Two Aurora police officers have been suspended for their role in prematurely leaking body camera footage of Denver Mayor Michael Hancock’s son using a gay slur and threatening an officer. The mayor’s office has said Jordan Hancock has since personally apologized to McClendon. Jordan Hancock also had to pay a $275 fine for the speeding infraction.
— Fox 32 Denver, 8/22/18