We try and observe journalistic ethics, which includes the obvious: NOT cutting-and-pasting entire pieces other people wrote. We’ve only done that ONCE because the content was important and it was feared the original source would remove it out of social pressure and intimidation (and it turns to have been a good call).

Over the years, we’ve attempted to share our content on FreeRepublic.com, a conservative online forum with huge reach. However, their members are at times extremely hostile to anyone sharing their content for the sake of gaining hits (which is the ultimate goal of any online entity), and they demand a full cut-and-paste version of other people’s content, thus draining hits from the original source, because it would appear some who frequent that forum are just too lazy to have to go from one website to another.

Despite their being sued by the Las Vegas Review-Journal for repeated cut-and-pasting of full columns, FreeRepublic users continue to lift entire pieces for others who could be bothered to click on a link.

A conservative news-sharing website with plenty of experience in dealing with copyright issues has been sued for copyright infringement after Las Vegas Review-Journal stories allegedly were posted on its site. Free Republic LLC, James C. Robinson and John Robinson, who are associated with the website www.freerepublic.com in Fresno, Calif., were sued in federal court in Las Vegas on Monday over the postings.

These postings amount to copyright infringement, charges the lawsuit filed by Righthaven LLC, which has partnered with the Review-Journal to sue website operators around the country. The suit seeks damages of $75,000. The site also includes a long list of newspapers that have requested the site not post their stories, or post only excerpts and links.
— Las Vegas Sun, 7/20/10

Cognizant of their users’ practice, FreeRepublic issued the following.

Concerning copyrights, the website says: “Free Republic has settled the alleged copyright infringement suit brought by the Los Angeles Times and the Washington Post and has agreed not to post full text articles from their publications or any of their related subsidiaries and affiliates. Please do not post full text from these sources.“

One such example is our post, The Democrat Race Lie, cut and pasted in its entirety on FreeRepublic, and the user was repeatedly thanked for stealing the entire piece.

Obviously B&R’s content is good enough to steal and inspire others to donate for that content… to FreeRepublic!

At the top of his entry, this “scottfactor” claims I gave him permission to post The Democrat Race Lie on his blog. I believe I would have let him link to it, but not repost it whole, and his posting the whole article on FreeRepublic was certainly something I wouldn’t authorize.

As we’ve said before, everything people create and offer the public has a monetary value because of the time it takes to create and people choose to consume. FreeRepublic is a forum that offers a service and they have consistently successful fundraisers where they haul in over $80,000 per quarter.

One could rightfully argue that by their users cutting-and-pasting entire articles, revenue is being siphoned from the rightful creators.

Sites “Marginize” and “FreedomWorks Connector” have also found ways to capture The Democrat Race Lie and keep thousands of hits for themselves. Someone at Straight Pale Christian Republicans cut-and-pasted the entire Democrat Race Lie AND Dixiecrat Myth posts.

The uber-leftist Daily Kos also linked to The Democrat Race Lie, and they surprisingly did so properly. They presented a short segment, linked back to the original, and their readers actually seemed to learn something about the history of the Democrat Party, which is the ultimate goal of B&R and B&B Media…. 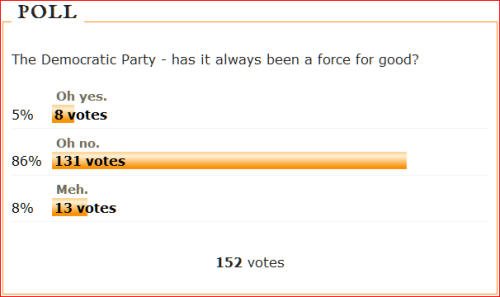 We have sites that do nothing but bleed our content, like “Dude With An Attitude” who even created a category called “Black & Right” and the theft was automated. 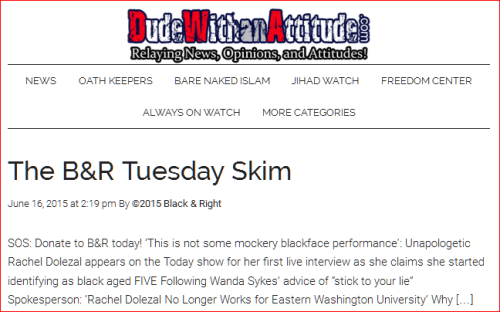 After being publicly called out on Facebook, “Dude” deleted the hundreds of our posts he stole.

The Democrat Race Lie has also been stolen by sites and it ranks very high on search engines coming from those sites as well. 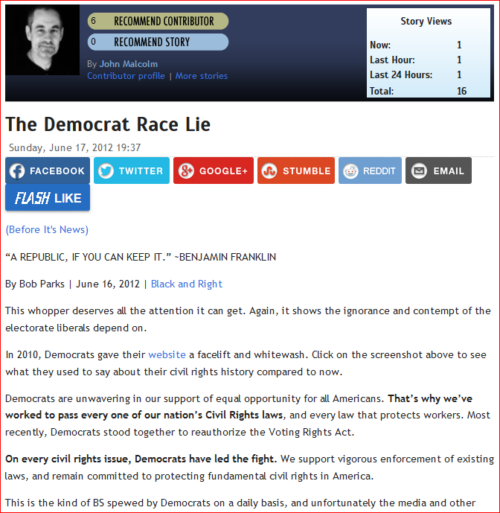 In its entirety on the Romantic Poet… 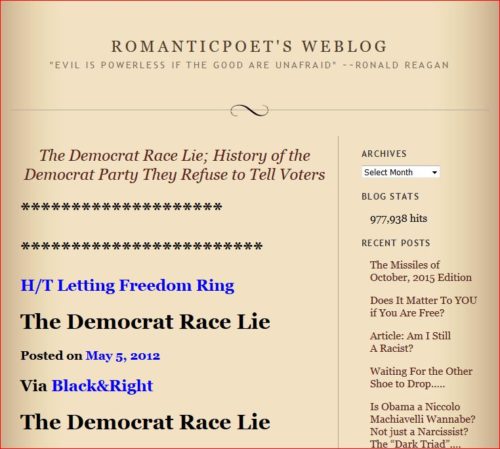 And Wayne Dupree, who used the title while only cutting-and pasting the first few paragraphs, gave all appearances as if those words were his. Incidentally, Dupree “earned” the honor of CPAC 2015 Blogger of the Year. 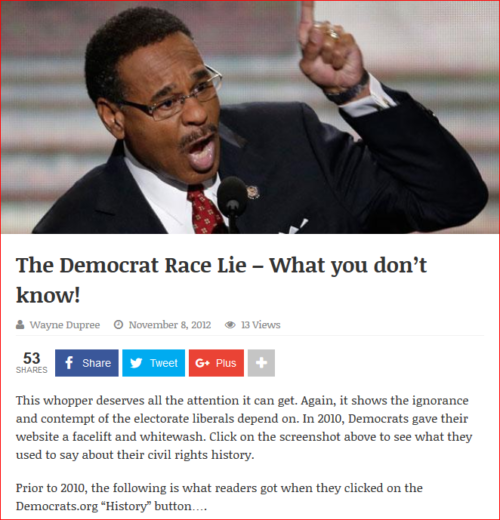 Makes one wonder how many of his posts were ripped whole from others and passed off as his own original works.

Obviously, B&R’s content is good enough to steal and we’d hope it’s also worthy of donations as well. While $88,000 a quarter would enable us to do wonderful things, less than $50 per month we DO receive is appreciated. The theft of our content certainly doesn’t help.

NOTE: This post was linked to on FreeRepublic. I was just informed in less than an hour it was removed. So much for principled “conservatives”….