Having a television show is a responsibility; even a show with questionable reach.

She found a champion; put all of her eggs in that #antiTrump, #resistance, #MeToo basket, that she set herself up for the humiliation she rightfully deserves. Bee, in typical liberal media modus operandi, reedited the title and description of the YouTube upload from November 8, 2017 to imply she was a victim of a con before proceeded with a #MeToo pile-on. 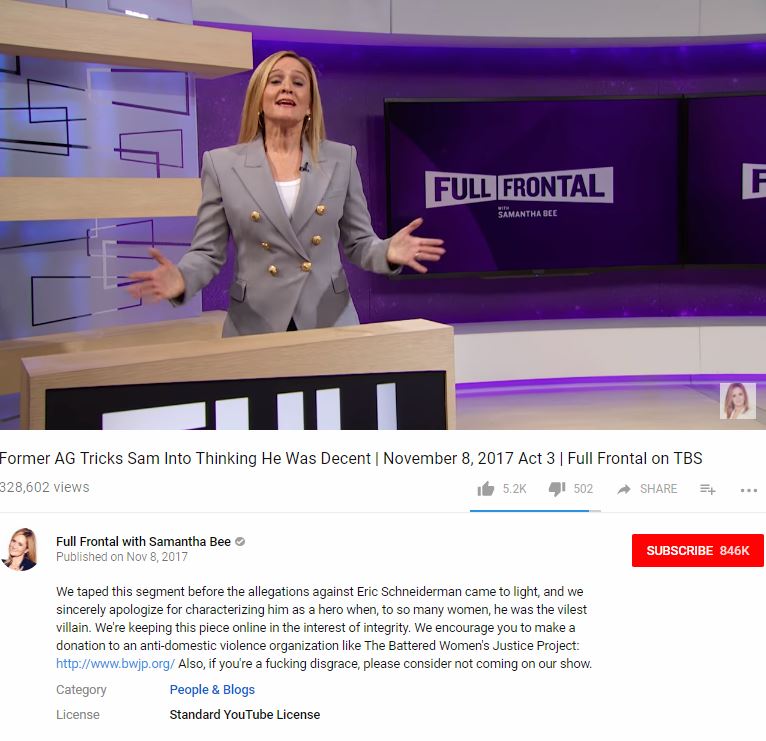 By editing the title, Bee admits that she was busted in blind, full-frontal praise of Schneiderman and attempted to cover her tracks because her judgment is in valid question. Then again, an evil man tricked HER: add her to that #MeToo victim list.

Had anyone on Fox News or any conservative media outlet produced such a squishy segment with a serial abuser of women, Samantha Bee would be the first to call out that outlet on their stupidity and complicity in propping up such a vile person. But she assumes no responsibility for having on someone who misled her and her audience. She took no responsibility for not properly vetting a guest on her show, even though it was a well-kept secret.

“Fuck you, Eric Schneiderman” is not a respected acknowledgement of a lapse in judgment or even an admission that believing Schneiderman may just mean some of the things he said about Donald Trump may also not be true.

Samantha Bee has no credibility outside of her small mind.

Then again, she has a TV show and that’s all she needs.