It appears New Zealand mosque shooter, Brenton Tarrant, was an avid consumer of American media and Democrat politics as (while going all over the place in his “manifesto”) he accurately predicted the ways our media and politicians would react to his violence.

The media was pretty much in lockstep here, so any selective information about what Tarrant wrote would have to come through them. See a problem looming? We’ve learned long ago that when the media says NOT to do something, there’s often a partisan, political agenda.

So, we did and it was almost immediately obvious why they didn’t want it out there without their biased filter.

Tarrant first played on the correctly-anticipated Democrat political response to the use of a gun, which would initiate a call for another “discussion” on the need to eliminate the 2nd Amendment, coupled with the quilt-by-association (once again) of the National Rifle Association. 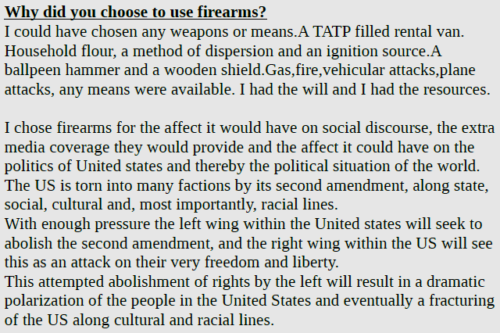 And it was an easy bet who’d take the bait…. 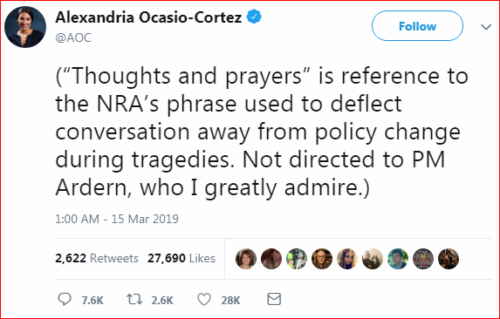 Tarrant knew a partisan media would blame his attack on President Donald Trump and he was right. 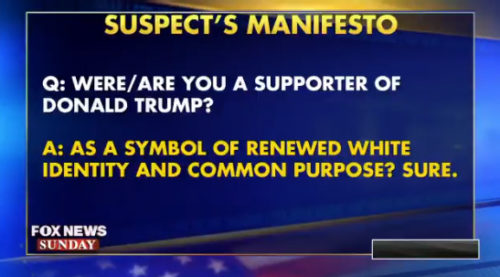 The media knew most people would either not know where to find or not bother to read the manifesto, so you’d just have to take their word for it. The news disseminators committed (yet again) another example of bias-by-omission because when you read ALL of what Tarrant wrote, it’s clear he’s NOT a devotee of Donald Trump.

“Dear god no” is not exactly a ringing endorsement by someone you’d expect to be wearing a MAGA cap.

Not as savvy as advertised….

Tarrant’s endorsement of Candace Owens is a curious one, but he’s just ANOTHER sucked into the fraud she is. Owens is a very-recent conservative convert of convenience, was initially hired by Turning Point USA’s Charlie Kirk as a black face to cover for his organization’s blatant racism, and her social media musings are hardly original. 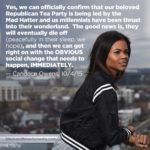 It’s sad that despite our well-researched chronicling of Owens’ fraud and her clear disdain for Tea Party conservatives (of whom she hoped would “peacefully die-off in their sleep” so HER millennial generation could take the power she believes she deserves), she’s been repeatedly endorsed by Rush Limbaugh, many other conservative entities and President Trump.

Brenton Tarrant knew our Democrats and their media well, however the left is colorblind when it comes to the desired confiscation of firearms for self-protection and look at the results, i.e. Chicago, Baltimore, New Orleans, etc.

The media also portrays him as a “right wing extremist”.

Tarrant doesn’t appear to care much for labels.

Hmm… only saw the “right wing” in the headlines. Bias-by-omission is something the media is really, really good at, especially when they they attempt to control who can see what with their own eyes.

In fact, this sounds more like the far-left recitations of Bernie “one puh-sunt” Sanders and Alexandria Ocasio-Cortez than anything President Trump or any conservative has ever said. Maybe that’s why none of the media has included this quote from Tarrant’s manifesto.

Oh, and another thing our media hasn’t told the American people: Tarrant is an environmentalist not too happy about the lack of real progress from the “movement”. 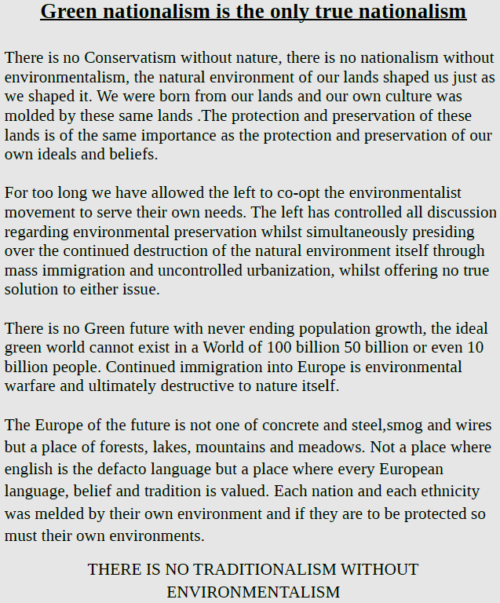 We assume our media will get around to this shortly, you know, to competently inform the public. 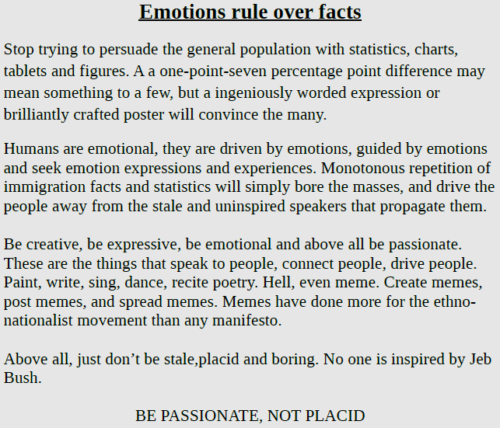 Tarrant knows our liberal left well and one could speculate that he has Rules for Radicals somewhere on his reading list.

Saul Alinsky wrote, “Never go outside the experience of your people.” In other words, assume your followers are uninformed, use emotion over facts because they rightly assume the Democrat base will act out without any critical thinking and/or desire for additional details. Works every time.

Despite the initial assessment and direct finger pointing from Democrats and their media, the Christchurch shooter is NOT a “right wing extremist”, pro-NRA, Donald Trump supporter. Brenton Tarrant knows all the triggers that would play both the media and our politicians.