The Government/Nonprofit War on Veterans

©Black & Blonde Media
It was easy for some to attack Donald Trump’s veteran fundraiser and call it a political stunt because he didn’t just write a big check directly to a slew of potential nonprofits. 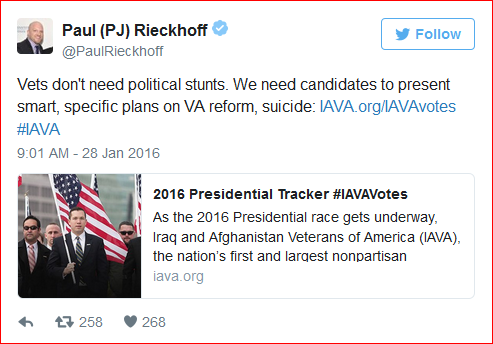 Mr. Rieckhoff is a founder of the veterans group Iraq and Afghanistan Veterans of America. Yes, another nonprofit dot org; one of many that displays the same, consistent symptoms: good intentions, questionable results, and generous compensation for the principals.

While it’s easy to create agencies and nonprofits that claim to help veterans, the extent to which they are helped can be interpreted in many convenient ways and if you actually talk to veterans in need of assistance, the customer satisfaction is quite low, that is if a homeless veteran seeking a place to hang his or her hat being uniformly directed to another nonprofit shelter can be defined as assistance.

When it comes to those who claim to want to help veterans, the Chris Rock analogy on medicine comes to mind….

Ain’t no money in the cure. The money’s in the medicine. That’s how you get paid. That’s how a drug dealer makes his money! Curing AIDS? Shit, that’s like Cadillac making a car that lasts 50 years. You know they can do it but they ain’t gonna do nothing that fuckin’ dumb.
— Chris Rock, Bigger and Blacker, 1999

There are a whole slew of so-called veteran nonprofits out there and just what do you think would happen if they actually did what they’ve claimed they want to do for years? They would be out of work if they were effective, and the same can be said for government agencies that also claim to be there for veterans and this is where the politics comes into play.

As usual, when politicians get involved, numbers can and will be skewed to their advantage.

Anyone with a brain knows that veteran homelessness has not been ended, and adding the word “functionally” is an insult to the intelligence of the American people and veterans but politicians surely believe it makes them look good, thus is something they can and will run on for their own self-serving, reelection purposes.

Government agencies and nonprofits with the mission to get veterans off the street are an abysmal failure, if they were ever intended to complete that mission. The one thing they ARE good at is telling veterans what they can’t do and any veteran reading this will be nodding their heads in agreement of experience.

Government agencies and nonprofits with the mission of helping veterans obtain meaningful employment (independence) have the same abysmal track record.

Filling the janitorial jobs with veterans helps the VA meet its hiring goals without intruding on a lucrative union giveaway that favors current government employees over everyone else for the majority of open positions.
— Daily Caller, 1/17/16

Nonprofits and government agencies are, simply stated, career mills for liberals and we know from experience there is genuine disdain for the military from those who are tasked with the sole directive of helping veterans. We were recently told by a nonprofit supervisor that it’s unfortunate that more government monies available to help the homeless because so much is currently spent on “armaments”. We can only speculate that supervisor may have assumed I didn’t know what that word meant, but that’s illustrative of the contempt for the military seeing how all veterans either worked with or supported the use of “armaments”.

Why are nonprofits and government agencies hesitant to hire veterans in meaningful jobs? From experience we know liberals are some of the most intolerant, especially in a workplace environment and reliable, hardworking Republican veterans would intrude in their safe spaces.

Also, a hardworking veteran would expose the lackadaisical approach of co-workers and it’s just easier to point him or her to a mop instead of a desk. 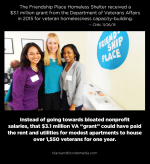 Any veteran who has visited a veteran nonprofit or government agency serving veterans will note the amount of people who clearly never served, been homeless, let alone missed a meal. There is often no sense of urgency and understanding of the plight when veterans are given a photocopied piece of paper, phone numbers, or links directing them to yet another nonprofit or government agency. And if you were to look at the use of funds donated or directed to veterans, the ROI is an obvious fail.

While it’s easy for some to criticize Donald Trump’s fundraising for veterans, let’s also remember that some of those running for president have been instrumental in funding (through legislation) the very scandal-plagued government/nonprofit machine that receives taxpayer and/or charitable donations that benefit those entities FIRST, and actually helping veterans is something they won’t do because it would potentially put hundreds of thousands out of lucrative employment.

As for Mr. Trump, bringing attention to veterans is laudable.

We just don’t think he really understands just how bad the problems are, made worse by those who claim to be helping.