After Rep. Ilhan Omar cavalierly stated that “Some people did something” with regards to the 9-11 terrorist attack, there was uniform outrage and condemnation from the sane. Seeing how active she’s on social media, that’s where she received backlash… just like anyone else would. 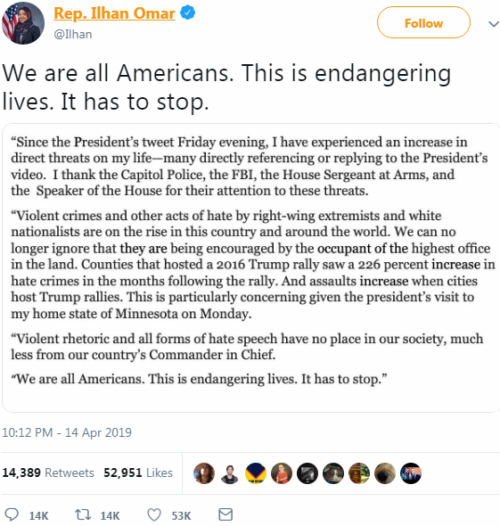 But like @AOC, Omar believes she’s special and nothing bad should be said by the anonymous brave. As far as the threats go, it seems only one person is documenting them thus the liberal media have found themselves a hero! 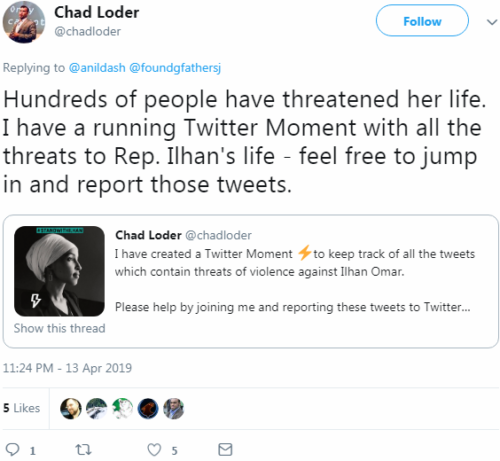 The cybersecurity expert noticed that President Trump’s Friday tweet — a video juxtaposing Rep. Ilhan Omar (D-Minn.) with footage of the twin towers falling on 9/11 — had generated a surge of activity from a sector of Twitter users he argues aren’t always taken seriously: the ones who incite violence.

The threatening messages made toward Omar were so severe they prompted House Speaker Nancy Pelosi (D-Calif.) to increase protection for the congresswoman.
— Washington Post, 4/16/19

Yes, Loder provided a few examples of Tweets none of us would condone. 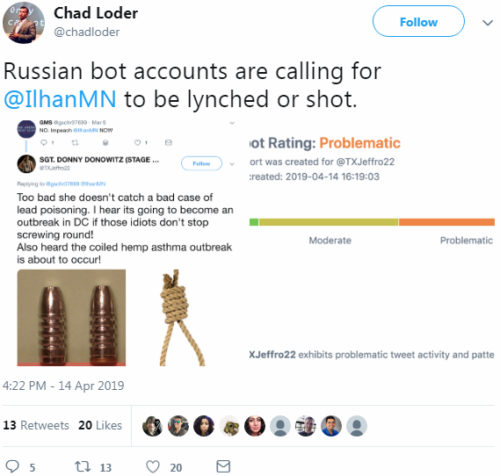 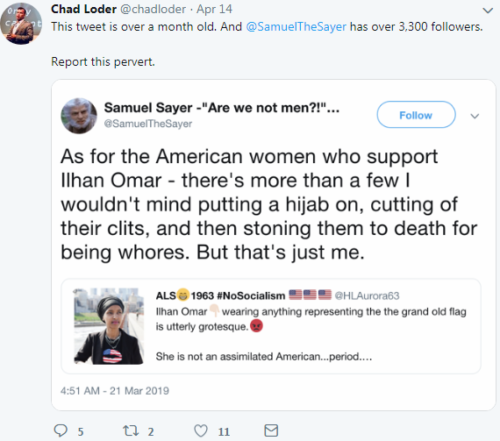 We’re not seeing the “hundreds”.

While he’s the Washington Post’s official champion du jour, saving the damsel in distress from her own terror-sympathizing rhetoric, we’ve yet to see anyone on social media, the so-called professional media, or any liberal activists decry the literally hundreds of death threats from liberals issued to President Trump. 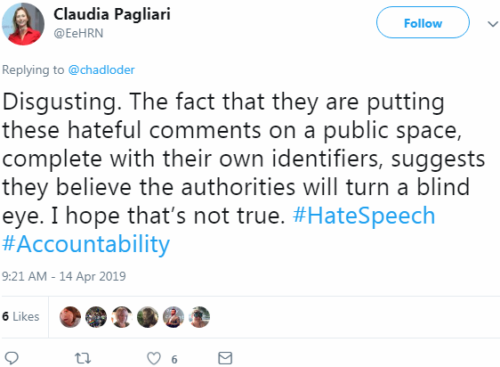 Oh, it’s true and not an activity solely performed by those who abhor Omar’s consistent antisemitism and terrorist sympathy.

Note: Most of the hundreds of death threats on Twitter have been sent by those demanding someone else kill President Trump because they’re not bad enough to do it themselves. Here are just a few….

To date, Rep. Ilhan Omar has thanked the Capitol Hill police, FBI, and the House Sergeant at Arms with regards to the “death threats” she claims to have received. Let’s hope taxpayer money isn’t being diverted to protect ONE public servant who believes she deserves special treatment. If any of us walked into a police station and claimed to have been threatened, we’d be asked who threatened you, when did you get the threat, etc. We’ve seen none of that from Omar and the only source thus far is one person who’s stepped forward, to the willing delight of the Washington Post, while literally hundreds of death threats to the President of the United States are there for the world to see and no concern from the conscientious left.

Maybe Omar should take a cue from Rep. Alexandria Ocasio-Cortez who recently decided to ramp down her social media activity because she wasn’t receiving the adoration she believes she’s entitled to as a member of Congress.

Too much screentime can be bad for your physical and emotional health, she said during the Yahoo podcast “Skulldudgery.”

“I personally gave up Facebook, which was kind of a big deal because I started my campaign on Facebook. And Facebook was my primary digital organizing tool for a very long time. I gave up on it,” Ocasio-Cortez said.

Thanks for the public service announcement, but of course, any criticism against the #SnowflakeCaucus is a take-your-pic “ism”.

We are getting to a level where this is an incitement of violence against progressive women of color.
— AOC, NPR, 4/15/19

And like all of the “death threats” that have supposedly come in against Rep. Omar, take their word for it on our dollars.