Then again, there are teams that make bad decisions on an annual basis, so never say never.

This may be a very hard concept for most of the #woke to absorb but the National Football League is not a progressive nonprofit that doesn’t need to show positive results. The NFL is a business, and in keeping this as simple as possible, it’s a league of 32 teams and only one can attain the ultimate goal which is winning a Super Bowl.

Then again, that may change. Stand by….

There has been much dismay by the activist left that no team, since the Baltimore Ravens in 2018, has offered Colin Kaepernick an opportunity. It’s not solely because of his Black Lives Matter activism, but because of his on-the-field numbers just prior to his being cut from the San Francisco 49ers; numbers probably few (if any) supporters of Kaepernick could tell you off hand. 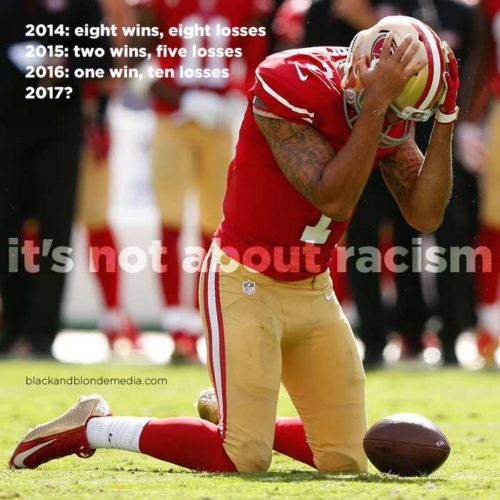 There is also a major issue with any team that even makes mention of possibly acquiring Colin Kaepernick.

Kaepernick was supposed to work out for NFL teams at the Falcons’ facility earlier this year, but after disagreements over various aspects of the session, Kaepernick moved the workout to an Atlanta-area high school.

Despite looking good in the session, Kaepernick wasn’t offered a contract by any NFL team.
— Yahoo Sports, 6/28/20

For shits and giggles, let’s just say the Atlanta Falcons signed Kaepernick. Do you really think he’d be expected to sit on the bench behind Matt Ryan? No way, José. The team would be pressured into starting Kaepernick which means Matt Ryan would be looking for a new home, and there would be teams who’d offer him tasty contracts within days.

Two weeks ago, Los Angeles Chargers coach Anthony Lynn said Kaepernick is on the team’s workout list. With team facilities shut down because of the coronavirus pandemic, it’s unclear when the Chargers might be able to bring in Kaepernick.

“Unclear” as this is not the greatest of situations seeing how the Chargers picked Oregon quarterback Justin Herbert with the No. 6 overall pick in the 2020 NFL draft to replace Philip Rivers, and also have a proven starter in Tyrod Taylor.

“I haven’t spoken with Colin, not sure where he’s at as far in his career, what he wants to do, but Colin definitely fits the style of quarterback for the system that we’re going to be running. I’m very confident and happy with the three quarterbacks that I have but you can never have too many people waiting on the runway,” Lynn said, via ESPN. The Chargers currently have Tyrod Taylor, No. 6 overall pick Justin Herbert and Easton Stick in their quarterback room.
— NBC Sports, 6/17/20

A very safe way of Coach Lynn’s saying the safe thing: he wouldn’t mind having another option… (but he doesn’t really need Kaepernick).

First round picks are seldom told they’re going to be benched when they get that call on Draft Day. If Kaepernick started and is moderately successful, Herbert may wish to look elsewhere for playing time resulting in a wasted first round pick by Los Angeles. Tyrod Taylor would be the most logical starter for Los Angeles while Herbert learned and wasn’t thrown into that infamous rookie trial-by-fire that’s maimed many careers.

And again, if Kaepernick doesn’t play well, Coach Lynn would be well aware of the social activist backlash if he did what most teams tend to do to a player who’s not performing: sit him down on the bench and replace him with someone who may do better.

Kaepernick visited the Seattle Seahawks in the spring of 2017 after he opted out of his contract with the San Francisco 49ers, making him a free agent. Head coach Pete Carroll’s reasoning for not signing him at the time was that the Seahawks felt he was a starter and they already had one in Russell Wilson.
— ESPN, 6/11/20

Most teams already have a starting quarterback, and yes, some are better than others. But if a team signs Kaepernick, it’ll be demanded by forces outside of a team front office, that he be the starting quarterback for Week 1 and the head coach’s ability to choose his quarterback will be circumvented by the sports-ignorant in social media.

But bored sports writers with no sports to report are just left to their musings and speculation.

Pittsburgh Steelers
Franchise staple Ben Roethlisberger turned 38 in March, and likely doesn’t have many starter-quality years left in the NFL. Kaepernick is six years younger — and with Big Ben coming off an injury — the ex-49er could help keep the offense afloat for Pittsburgh in case Roethlisberger can’t return to his previous form.

New England Patriots
This likely would provide Kaepernick the best opportunity to be a starter right away. Franchise icon and proverbial GOAT QB Tom Brady departed this offseason in free agency, and many expect coach Bill Belichick to hand the keys over to untested young quarterback Jarrett Stidham. Kaepernick at the very least could give Stidham some stiff competition in training camp, if not win the starting job outright.

Jacksonville Jaguars
The Jaguars have dealt with ineptitude at the quarterback position for many years. Gardner Minshew didn’t exactly set the NFL on fire in his rookie season, but 21 touchdowns with just six interceptions over 14 games did inspire some hope in Jacksonville.

Detroit Lions
Matthew Stafford only played eight games in 2019 after breaking bones in his back. Stafford reportedly is 100 percent recovered from the injury, but has taken plenty of shots over his 11-year career. Trade rumors swirled around Stafford early last season, and he even put his $6.5 million Michigan home on the market in May. Kaepernick would be a nice insurance policy for Stafford, and even has a similarly powerful throwing arm.

Atlanta Falcons
Matt Ryan did win the NFL MVP just four years ago, but he hasn’t returned to near that level since offensive coordinator Kyle Shanahan departed for the 49ers. Ryan’s numbers have declined, and he led the NFL after being sacked 48 times in 2019. Although Matt Schaub has been a serviceable backup, including throwing for 460 yards in his lone start last season, he’s 38 years old and likely isn’t much of an upgrade over Kap, if at all.

Neither Pittsburgh nor New England, especially with their respective exposure to drama queen Antonio Brown, are going to want to bring off-the-field issues into their cultures. Both do have quarterback issues but both franchises also tend to land on their feet, not initially on a knee. Detroit is oh-so-slowly becoming New England West, so again, paying for drama unrelated to the field won’t be easily considered. Atlanta won’t bench Matt Ryan for the unknown Kaepernick is today.

Jacksonville is used to mediocrity so they may be a possibility. The problem is most of those pushing for Kaepernick’s return couldn’t tell you what conference Jacksonville is in, don’t buy game tickets, and wouldn’t know if the Sunday games are on CBS or Fox Sports. From a business standpoint, there’ll be as much monetary return if Kaepernick plays poorly as if he plays well and that’s not a good reason for giving any player a respectable contract.

Then there’s another reality, borne by facts: very few players who’ve missed three or more consecutive seasons have returned to the field with any modicum of success. There are, of course, exceptions but that number is very small, those players were elite, and none of them returned commanding what Colin Kaepernick and outside forces will want today for him to put on an NFL uniform. 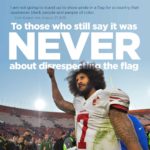 Keeping it simple (again), very NFL team enters the season with one goal and only one goal: to win the Super Bowl. They hope to focus on that goal like a laser. Distractions are the last thing wanted in a locker room, and very few bring on a player who’ll bring off-the-field drama with them. Of course, there ARE players whose skills make them tolerable exceptions.

Colin Kaepernick is NOT one of them.