Democrats Are Election-Denying ‘Extremists’. Let Us Count The Ways….

Democracy cannot survive when one side believes there are only two outcomes to an election: either they win or they were cheated. And that’s where MAGA Republicans are today.
— President Joe Biden on the Continued Battle for the Soul of the Nation, 9/1/22

It’s been a constant as far back as most of us can remember that Democrats have been playing fast and loose with their variation of the sociopathic mental disorder known as projection: disparaging others for doing what they knowingly do themselves.

Today’s Democrat Party and their media depend on the cultivated ignorance of their voters to portray Republicans as extremists for daring to look into numerous, blatant irregularities in the 2020 election while demanding the American people accept Democrat victories as legit and final simply because they say so. No denial is tolerated when the Democrat wins.

However, it IS standard operating procedure for Democrats to reject Republican victories despite their convenient denials….

Biden and Democrats have a long history of contesting election outcomes.

Every single Democrat president since 1977 has cast doubt on the legitimacy of U.S. elections.

As recently as this year, Biden cast doubt on the legitimacy of the upcoming 2022 midterms.

For years, Democrats have refused to accept the results of the 2000 presidential election.

Al Gore repeatedly claimed that he was the real winner of the 2000 election.

In 2002, Gore claimed he “would have won” if every vote in Florida was counted and that he “absolutely” believed he would become president after the ordered recount.

Gore’s wife, Tipper, said that “I still believe we won“.

In 2016, Gore brought up the 2000 election during a rally for Hillary Clinton and did not refute chants from the audience saying he won.

In 2017, Gore implied Jeb Bush “may have had something” to do with him losing Florida.

Hillary Clinton, more than once, questioned the legitimacy of the 2000 election.

In 2002, Clinton said Bush had been “selected” and not elected president.

In 2016, Clinton said that the Supreme Court “took away a presidency” in Bush v. Gore.

Then-President Bill Clinton in 2001 claimed that Gore actually won the election, suggesting that all the votes in Florida were not counted and that the Supreme Court had altered the outcome.

Clinton: “The only way [Republicans] could win the election was to stop the voting in Florida.”

Former President Jimmy Carter has repeatedly denied the results of the 2000 election.

Carter, in 2005: “There is no doubt in my mind that Al Gore was elected president“.

Terry McAuliffe repeated claims that the 2000 election was “stolen” for over two decades.

In 2004, McAuliffe falsely accused Republicans of “stealing” the 2000 presidential election.

In 2008, McAuliffe accused Republicans of “stealing” the 2000 election in his autobiography.

In 2017, McAuliffe once again claimed that Al Gore “did win the election“.

In 2021, McAuliffe doubled down on his previous “stolen” election claims and refused to say that Bush won the 2000 election.

Rep. Jamie Raskin (D-MD), a member of the January 6th Committee, has repeatedly suggested the 2000 election was illegitimate.

In 2002, Raskin wrote that the Supreme Court had “[frozen] the election results” in an “outrageous assault on democracy,” saying the Court had “determine[d] the outcome of a presidential election“.

Rep. Maxine Waters (D-CA) questioned the 2000 Florida election results, calling them “fraudulent” and staging a walkout of the House chamber.

Rep. James Clyburn (D-SC) questioned the integrity of the election and “the future of our democracy“.

Rep. Eddie Bernice Johnson (D-TX) claimed that there was “overwhelming evidence” that Bush did not win the 2000 election and vowed there would be “no peace” as a result.

Former Rep. Corrine Brown (D-FL) said that Bush “was not elected,” saying in 2004 that Bush was chosen by the Supreme Court and that the election was stolen in a “coup d’état“.

DEMOCRATS REPEATEDLY CAST DOUBT ON THE LEGITIMACY OF THE 2004 ELECTION

The election in 2004 was no different than 2000, with Democrats once again denying the results of an election they did not agree with.

John Kerry raised questions about the election on multiple occasions, claiming that many voters were “denied their right to vote; too many who tried to vote were intimidated”.

Kerry’s wife Teresa Heinz Kerry also claimed the presidential election could have been hacked and stolen.

In 2006, then-DNC Chairman Howard Dean stated that he was “not confident that the election in Ohio was fairly decided” in 2004.

In 2008, Dean accused Republicans of stealing elections and inferred they stole the election in 2004.

In January 2005, then-Sen. Hillary Clinton (D-NY) claimed there were many “legitimate” questions regarding the “accuracy” and “integrity” of the 2004 election.

Sen. Dick Durbin (D-IL) applauded objections to the 2004 election and thanked Sen. Boxer for objecting to Ohio’s electoral votes, saying voters can’t be confident their vote will be counted.

Harkin also accused Republicans of a “concerted effort to suppress the vote” and suggested electronic voting machines could lead to “serious fraud”.

Then-Sen. Ted Kennedy (D-MA) in 2005 applauded Democrat efforts to contest the 2004 election, called the election “flawed,” and suggested problems may have been the result of “manipulation”.

In September 2008, then-Sen. Barrack Obama (D-IL) joked about the 2004 election, saying it helps that in Ohio “Democrats are in charge of the [voting] machines” in the upcoming election.

Sen. Debbie Stabenow (D-MI) questioned the use and efficacy of electronic voting machines in the 2004 election.

In January 2005, then-House Minority Leader Nancy Pelosi (D-CA) praised Sen. Boxer’s challenge of the election, saying the debate is “fundamental to our democracy”.

Pelosi said it is “appropriate” to have the debate concerning the 2004 election and claimed that there were “legitimate concerns” regarding the “integrity” of U.S. elections.

Then-Rep. Dennis Kucinich (D-OH) claimed that “dirty tricks occurred across the state” of Ohio in the 2004 election.

Rep. Barbara Lee (D-CA) claimed democracy was once again “thwarted” in 2004 and blamed the use of electronic voting machines for voter suppression.

Rep. Sheila Jackson Lee (D-TX) said, “the system of voting broke down Nov. 2, 2004” and called for an independent audit of discarded ballots.

Jackson Lee then said, “we cannot declare that the election of November 2nd, 2004 was free and clear and transparent and real for all of those who attempted to vote”.

Then-Rep. Cynthia McKinney (D-CA) in 2005 attacked the efficacy of voting machines saying they “can’t be trusted.”

Rep. Jerry Nadler (D-NY) repeatedly claimed there were irregularities in the 2004 election. 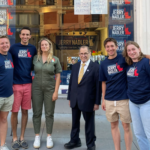 In November 2004, Nadler said that “we are requesting an investigation into all the allegations, of irregularities with respect to the electronic and other voting machines”.

In November 2004, Nadler said that “well, we have received…any number of communications, e-mails, everything about all kinds of irregularities”.

In December 2004, Nadler said that “paper ballots are extremely susceptible to fraud”.

In January 2005, Nadler said the right to vote was “stolen” from voters.

Then-Rep. Bernie Sanders (I-VT) cast doubt on the security of electronic voting machines in the 2004 election saying he was “worried” that some machines do not have a paper trail.

Then-Rep. Chris Van Hollen (D-MD) said Boxer And Tubbs performed a “very valuable public service” and stated he was concerned with all “reports of voting problems in many parts of the country”.

Rep. Maxine Waters (D-CA) said the problems with the Ohio election could have been “outcome determinative”.

Rev. Jesse Jackson, Sr. “questioned the legitimacy” of the election and suggested the Bush victory was the result of “fraud and stealing”. 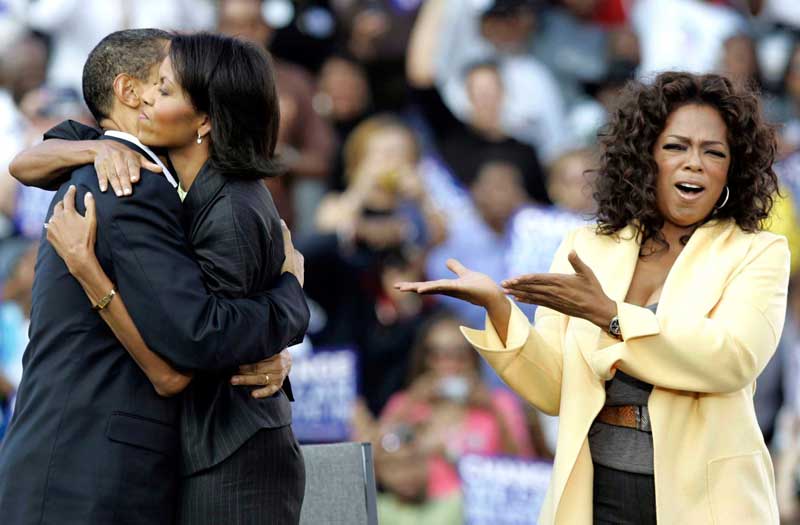 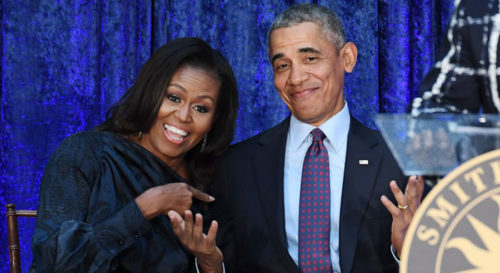 Of course when their guy won, Democrats had nothing but uniform praise for the integrity of the 2008 and 2012 elections. Michelle Obama was finally proud of her country.

DEMOCRATS REFUSED TO ACCEPT THE RESULTS OF THE 2016 ELECTION

In 2017, seven House Democrats tried to object to the 2016 election electoral votes.

After President Trump’s victory in 2016, 67 Democrats boycotted his inauguration, with many “claiming his election was illegitimate“.

After the 2016 election, Hillary Clinton repeatedly questioned the legitimacy of the election and claimed the election was stolen from her.

In September 2017, Hillary Clinton said she would not “rule out” questioning the legitimacy of the 2016 election.

In March 2019, Clinton smiled in agreement when former State Sen. Hank Sanders (D-AL) said the election was stolen from her.

In September 2019, Clinton dismissed Trump as an “illegitimate president” and said “he knows” he stole the 2016 presidential election.

In October 2019, Clinton said that Trump knows that he is “an illegitimate president“.

In December 2019, Clinton nodded in agreement that she won the election.

In July 2020, Clinton said Trump is scared for Americans to see “how illegitimate his victory” was.

In October 2020, Clinton claimed that the 2016 presidential election was not conducted legitimately, saying, “we still don’t really know what happened“. 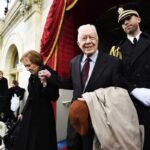 Former President Jimmy Carter said he believed that “a full investigation” would show that Trump didn’t actually win the election in 2016.

Rep Raul Grijalva (D-AZ) said the “legitimacy is in question” of Trump’s presidency.

Then-Rep. John Lewis (D-GA) said he did not believe President Trump is a “legitimate president“.

Rep. Barbara Lee (D-CA) “applauded” John Lewis and said that he was “right on target”.

Rep. Ted Lieu (D-CA) said “there absolutely is a cloud of illegitimacy” to Trump’s presidency.

DEMOCRATS HAVE CONTINUED TO CAST DOUBT ON OTHER ELECTIONS SINCE 2016

In 2018, Stacey Abrams refused to concede after losing the Georgia governor’s race and repeatedly challenged the “legitimacy of the election” after her loss.

Following her defeat, Abrams never conceded and continued to argue that she truly won the election.

Abrams said she would not concede a race that was an “erosion of our democracy,” was “not a free and fair election,” and was simply “not just“.

She called her defeat “fully attributable to voter suppression” and argued there was widespread voter disenfranchisement.

Many other prominent Democrats supported Abrams in her stolen election claims:

Hillary Clinton said Stacey Abrams “would have won” Georgia’s gubernatorial race “if she had a fair election” and that Stacey Abrams “should be governor” but was “deprived of the votes [she] otherwise would have gotten.”

Sen. Cory Booker (D-NJ) said “I think that Stacey Abrams’s election is being stolen from her“.

Sen. Sherrod Brown (D-OH) said that “if Stacey Abrams doesn’t win in Georgia, they stole it“.

Former Vermont Governor and DNC chair Howard Dean said Abrams “should not concede” and that the election was “almost certainly stolen”.

After losing his Florida gubernatorial race in 2018, Andrew Gillum withdrew his concession and pointed to “questions over the handling of the vote” in certain counties.

In 2020, after losing his House race, former Rep. Anthony Brindisi (D-NY) called for authorities to investigate voting irregularities and issues of “massive disenfranchisement of voters“.

BIDEN AND HIS OFFICIALS HAVE PUSHED STOLEN ELECTION CLAIMS

In May 2019, Biden said he “absolutely agrees” that Trump is an “illegitimate president“.

Kamala Harris has repeatedly cast doubt on election results over the years.

Following the Georgia gubernatorial race in 2018, Kamala Harris claimed that “without voter suppression, Stacey Abrams would be the governor of Georgia” and that Gillum would be “the governor of Florida”.

In 2019, Harris agreed that Trump was an “illegitimate president“.

Cedric Richmond – Biden’s former Director of the White House Office of Public Engagement – said that John Lewis’ remarks on Trump not being legitimately elected were “reasonable”.

And there’s probably more to come after every election Democrats lose from here on, so Joe Biden should be careful when he refers to “election deniers” being “enemies of the state”.

Liberals may be numerically-challenged when convenient.

Republicans can count and that’s what they’re afraid of.