From ‘Stab’ to Sob: The Harvard-Educated, Claira Janover Trainwreck

While it’s never a good thing to find amusement of the misery of others, there are always exceptions.

The Harvard graduate who said in a TikTok video that she would “stab” anyone who told her “All Lives Matter” revealed in a new pair of recordings that she has lost her job over the perceived threats and ensuing furor.
— New York Post, 7/1/20

You really have to see Claira Janover’s self-inflicted wounds for yourself.

Okay, where do we start?

“Trump supporters took my job away from me….”

Deloitte confirmed that she was never an employee of the company. Instead she was scheduled to complete an internship with them later this summer, which the company rescinded.

Which makes Claira Janover either mentally unstable or a pathological liar. You choose.

Jonathan Gandal, a managing director at the firm, said Janover ‘has never been an employee of our organization’. He said she was instead ‘formerly scheduled for a two-week internship later this summer.’ Gandal said the offer of an internship was withdrawn because they have a company policy forbidding threatening violence.
— Daily Mail, 7/3/20

Janover clearly didn’t read the fine print, publicly misrepresented her status with the company, and blamed others for her faux pas when  #CancelCuture became inconvenient.

Other youngsters who work at Deloitte or are due to leaped to her defense and started tweeting using the hashtag #FireMeToo, saying Janover had been fired for defending the Black Lives Matter movement.

Deloitte may wish to revise their intern screening process.

How many people in the public eye have said really stupid things and when the backlash ensues, claim it was sarcasm, or in case, an “analogy”? Had there been no backlash, there would have been no attempt to define the meaning of the word in question, so this excuse is old and lame. Not to mention those whose careers remain un-#cancelled despite referring to conservative women with the “cunt” word.

There are always accepted exceptions.

Claira Janover is now dealing with the reality that her quest for social media relevance may have made her undesirable in the high-paying corporate world of adults. Supposedly someone has create a a GoFundMe page for her; the initial goal is $10,000 but the justification is also problematic. 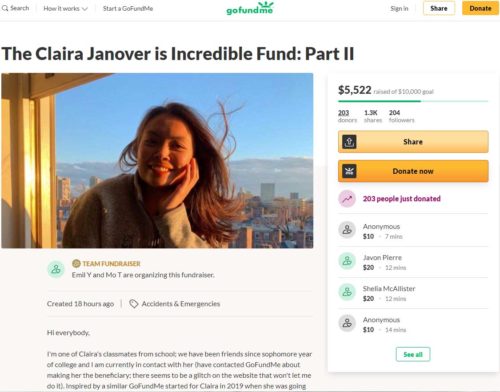 There are people in my inbox who are calling Claira a “domestic terrorist” for her TikTok about All Lives Matter, but this is just a convenient excuse to punch down a woman of color who has the bravery to speak truth to power.
— The Claira Janover is Incredible Fund: Part II

According to the GoFundMe description, this is the second time Claira has dipped into this well and it may not be the last.

As far as her being a “woman of color”, can we stop with these woke liberals employing their negro dialect? In her now infamous TikTok video, she repeatedly said “Ima stab, Ima stab….” Not all black people speak ghetto, not all black people like sounding uneducated, and for her to believe she can, shows that #BlackLivesMatter is a cause she latched onto so she can feel good about herself.

But like the awareness #Karen has brought to racist white women, Claira has now made things extremely difficult for corporate America to even want to consider hiring an under-30 candidate. Not only was she extremely reckless on social media, but she’s managed to blame everyone else (including her former employer) for the ramifications of her actions. Had a Trump supporter posted a video saying anything close to what Janover said, she’d the first to pile on, respond accordingly and gleefully hope for the doxing and firing of the offender.

But, SHE is different.

The video with Claira crying is almost satirical.

For those who are thinking of investing in a Harvard education, it would be wise to remember some of the more noteworthy that attended the university, like Ted “Unabomber” Kaczynski; George Lincoln Rockwell, founder of the American Nazi Party; mass shooter Amy Bishop; former Enron CEO Jeffrey Skilling; Lyle Menendez who along with his brother Erik, murdered his parents, and now… Claira Janover.