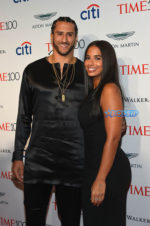 With the recent season-ending injuries creating possible openings in the National Football League, the controversy surrounding the availability of Colin Kaepernick has reemerged. Not by the sports media per se, but by the very girlfriend who quashed a done deal over a year ago.

Colin Kaepernick’s girlfriend, Nessa, is among those who believe the NFL is intentionally keeping the former San Francisco 49ers quarterback out of the league. She wasn’t the only one to insinuate as much, as former NFL player Charles Woodson told TMZ, “There’s a lot of guys that are in the conversation to be picked up. We know the reason [Kaepernick is] not one of those guys … but he should be.“ 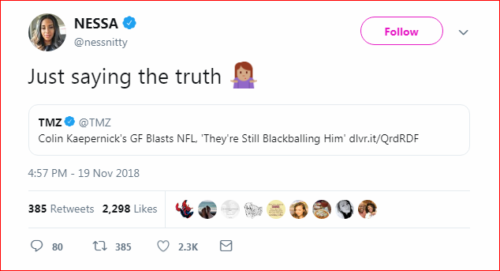 TMZ also noted former cornerback Antonio Cromartie suggested Kaepernick is better than the list of quarterbacks Washington brought in to work out after Alex Smith suffered an injury in Sunday’s game against the Houston Texans.
— Bleacher Report, 11/19/18

So inconvenient for Nessa, but Kaepernick may have been playing on an NFL field today had it not been for her opportunist “activist” big mouth… and more.

Of course, the media and the activist left will never admit that Nessa’s direct interference in the Baltimore Ravens deal is THE reason Colin Kaepernick is not throwing footballs on an NFL field for an NFL team today.

As the entire world knows by now, San Francisco 49ers quarterback Colin Kaepernick refused to stand for the National Anthem in Friday’s pre-season game against Green Bay because he was protesting ‘black oppression’ in the United States. We’re now hearing that it was actually his girlfriend Nessa’s idea for Colin to protest. 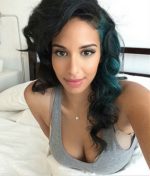 Fox News also looked into the couple and found evidence that seems to show that his “conversion to social activism” happened only after he began dating his girlfriend, DJ Nessa Diab. Her social media account has plenty of photos and posts related to her job as a DJ but it also shows her stance as a black rights activist and Islam defender.
— The Grio, 9/3/16 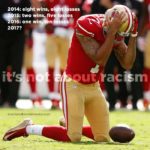 As written before, NFL teams are businesses and their main goal is to win as many football games as possible; not absorb those who have an unrelated off-the-field agenda. Calling a team owner racist with nothing to back it up is also in that things-not-to-do list; especially when your previous on-the-field record was questionable at best.

Especially coming from a girlfriend who may just up and leave her boyfriend once someone of a higher profile and value is available.