This is not to say that veterans are nonpartisan. There clearly are members of the military and veterans who are Republicans, Democrats, and independents. It HAS been documented over the years that the military tends to lean Republican, but that’s neither here nor there.

There is the latest craze called the “Wall of Moms” which the media immediately praised in unison.

‘Wall of Moms’ face down federal officers in Portland
Who won the week? Wall of moms, Biden, and Joy Reid
‘Wall Of Moms’ Organizer Calls On Fellow Suburban Mothers, People In Power To Fight For Black Lives
‘What choice do we have?’: Portland’s ‘Wall of Moms’ faces off with federal officers at tense protests
‘Wall of moms’ shields protesters saying ‘leave our kids alone’
In Portland, A ‘Wall Of Moms’ And Leaf Blowers Against Tear Gas
The ‘Wall of Moms’ Protecting Protestors Are Spreading Beyond Portland

But IF you take the time to search, you’ll see these aren’t just moms, but moms sounding like #woke millennials. Seriously, does this sound like  language “moms” would use…?

#wallofmoms is a PDX-based network of womxn and non-binary mother-identifying folx dedicated to supporting the current civil rights movement to end police brutality by defending and supporting BLM protesters on the front line and online.
— Wall of Moms, about

In case you’re not up on the vernacular, womxn is defined as “a woman (used, especially in intersectional feminism, as an alternative spelling to avoid the suggestion of sexism perceived in the sequences m-a-n and m-e-n, and to be inclusive of trans and nonbinary women); non-binary is defined as “a wide array of different identities which fall outside of the gender binary, and can be related to, or completely separate from male and female gender identities”; and folx defined as a “variation on the word folks, folx is meant to be a gender-neutral way to refer to members of or signal identity in the LGBTQ community”.

And we don’t think any self-respecting mom would help their children damage federal property.

You won’t see this reported by the professional media….

And as the attention was positive for the agenda-driven, the left decided to pile on.

First, there was a “wall” of moms protecting Portland protesters — now there’s a wall of vets doing the same. 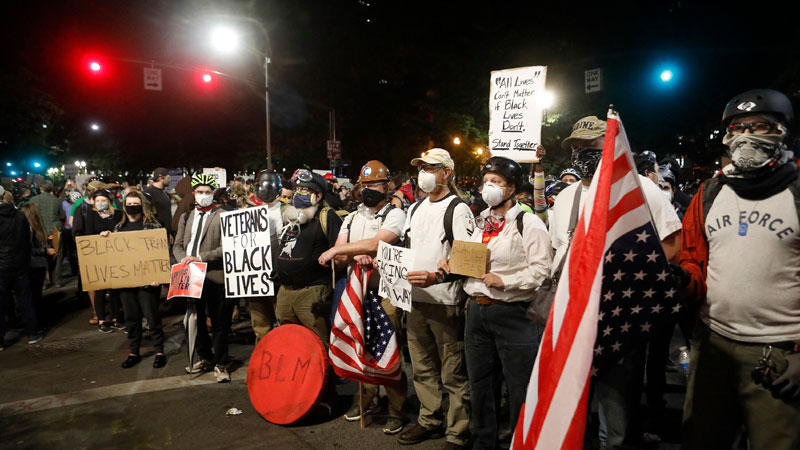 A group of military veterans joined protesters in the city for the first time Friday night, standing with their hands clasped behind their backs or holding Black Lives Matter signs, according to a New York Times reporter and others from the scene.

There’s a lot to be skeptical of here.

• As per some Democrat city mayors, the general public has to wear masks while “peaceful protesters” have no such mandate to observe.

• Antifa-types wear masks to obscure their identities while committing their acts of civil disobedience, destruction and violence.

• Seeing how anyone can say they’re something they’re not, Stolen Valor goes relatively unpunished, if not rewarded.

• Most veterans don’t condone or participate in public lawbreaking.

• Anyone can pose as a “mom” or a “vet” behind the disguise of a mask.

The Walls may be the real deal. Seeing how the left has no problems with blatant deception, reasonable doubt is valid.