‘Gen Z has earned a seat at the table’… Umm, Maybe a High Chair

In one of the more full-of-yourself opinion pieces written in quite awhile, Eve Levinson of The Hill issued a laughable demand that we take Gen Z and their political clout seriously.

I will admit Gen Z has political clout. Their votes (however uninformed and misguided), in part, gave us the Biden Administration and only a sheer ignoramus believes it’s been good for the country.

It’s clear that Generation Z has earned a seat at the table. We’ve led the social movements that have shaped our current politic climate and helped elect President Joe Biden and Vice President Kamala Harris into office. Our growing political power is driven by our unique perspective on the future as we ask ourselves: What does the future hold?
— The Hill, Eve Levenson, Opinion Contributor, 11/26/22

While you ponder that question, I will punctuate this response with videos that may answer what a Gen Z-led future may hold for America.

The fact that Millennials and Gen Z aren’t, for the most part, held in any regard is well known and justified. Let’s not forget, it was these geniuses who decided to drill headphone jacks in iPhones….

Most of the outlets are reporting on world events from Washington. The average reporter we talk to is 27 years old, and their only reporting experience consists of being around political campaigns. That’s a sea change. They literally know nothing.
— Ben Rhodes, former Deputy National Security Advisor for Strategic Communications and Speechwriting under President Obama

Many of these know-nothings deliver news while on their personal time, advocate for causes and groups that are antithetical to a civilized nation.

But back to Eve Levenson’s “piece”….

This election cycle, young voters once again voted decisively Democratic and turned out in numbers that exceeded historical trends.

In other words, EVERYTHING going wrong in America today can be squarely blamed on Gen Z. They proudly admit they voted for it and we, as a nation, are paying the price while they escape to the refuge of their parents home when it’s their turn to feel the pain they willfully caused.

This made our demographic the deciding factor, delivering the margin for Democrats in close races for the last three major elections. As John Della Volpe, Director of Polling at the Harvard Institute of Politics and 2020 Biden campaign adviser wrote, “Winning one election might be an accident. Two, an anomaly. Three in a row proves that earning the support of the Gen Z-millennial alliance is essential to winning elections in our current era.”

But as important as engaging the Gen Z-millennial alliance is to winning political power, it’s just as crucial that young Americans are represented in the federal government.

There was a time when Americans expected honorable, experienced people in the federal government. Levenson should be careful if age, not responsibility, is the only prerequisite.

Sam Brinton, one of the first “openly genderfluid individuals in federal government leadership,” was charged with felony theft last month after allegedly stealing a woman’s luggage at MSP Airport. The MIT grad went viral earlier this year when he announced his new role as the deputy assistant secretary of the Office of Spent Fuel and Waste Disposition in the U.S. Department of Energy.
— Alpha News, 11/28/22

Seriously, how many more thieves do we need in the federal government; a whole generation?

The boomer generation, they often mock, (for example) took us from the vinyl long-playing record to the eight-track to cassette player to compact disk to mp3 to streaming. Two generation prior, we went from antenna to cable television, from the Betamax to the VHS player to the DVD to Blu-Ray. There are many examples of significant contributions made by those who came before Gen Z.

Aside from appearing in what could be file footage used in an Idiocracy sequel, what have these 20-somethings created of value? Aside from manipulating existing technology to suit their phone addiction, they have yet to produce anything substantive and are seemingly more adept at taking from others, devoid of conscience.

Many of us are strategists and policy experts, too — and our generation must be represented in all rooms where decisions that affect us are being made. Gen Z and millennials make over 40 percent of the electorate yet we are only 7 percent of the federal workforce.

Could it be many in Gen Z couldn’t fill out an application for a federal job, may be concerned they couldn’t pass a drug test, or find life living at home off their parents preferable to being a responsible, self-sufficient adult?

It IS a probability.

When I met then-presidential hopeful Kamala Harris in October 2019, I asked her what her message to young people was and without hesitation she said not to wait or ask for permission to lead.

Even Joe Biden and Kamala Harris are smarter then Gen Z, and that’s saying a lot. They know these young people are easily duped so we can expect more empty promises from politicians aimed at people like Alexandria Ocasio-Cortez who, not until she was overpaid to be a United States Congresswoman, was “shook” that plants actually came from… dirt, like “magic”!. 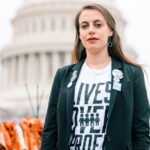 Buying the votes of the clueless is a no-brainer.

Two years later, there are more than 100 supporting organizations representing over 3 million young people. The youth movement is unified across dozens of issue areas and ideologies in our call to create an “Office of Young Americans,”  empower youth in existing positions and create a “Young Americans Advisory Council.”

The creation of offices that really don’t have to do anything but sound good to those who’d never attempt to read what that office will never have to accomplish. Just a few TikTok influencer videos from inside a federal office building is all it would take to satiate skinny brains.

When our generation leads, driven by our unique perspective of our future, we are relentless in the pursuit of justice and our very democracy — we will march, organize and turnout to protect it. We have consistently shown up to protect the future of American democracy. We have shown up for the Biden-Harris administration. We have shown up for their agenda. Now, is the time for the administration to show up for us.

Good luck with that.

Gen Z seems more adept at organized woke hissy fits like disrupting traffic, burning, looting, injuring and worse, all before going back home to sleep all day. They are adamant about voting ploys like abortion so they can continue their unprotected sexual activities unfettered.

Respect is something that was earned. Gen Z types like this Eve Levenson believe they should be respected; not for what they bring to the table, but simply because they exist. 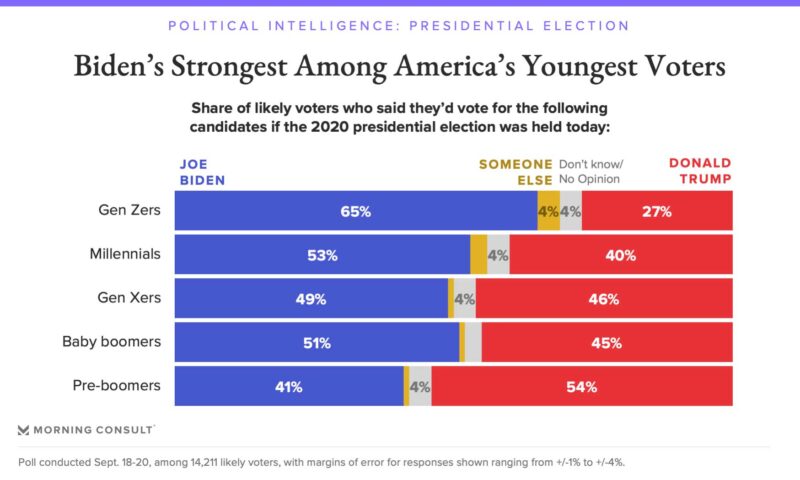 At some point, the general public will dismiss the partisan media and see the damage caused they have to endure; costs those who move back home won’t help out with. And thanks to attention-starved voters like Gen Z, Americans will know precisely who to blame.

They’ll just do what they do best: consume and contribute the minimum.

Let’s hope it gets ugly so these people won’t be taken seriously ever again.