Is Snopes.com Really Going Broke While the Mikkelsons Live Large?

Don’t look to Snopes.com for the answer on this one.

From the Daily Kos came this dire call to arms….

Snopes.com may shut down permanently
A few minutes ago, I needed to check out the validity of a story at Snopes.com and along the way, I was shocked to see that the site may be shutting down for good.

For me, Snopes.com is one of the best fact checkers in the world, second only to Wonder Woman’s rope.

At a time when the country has to deal with alternative facts and a leader of the country whose chief export is lying lies, we need every truth teller and fact checker we can find.
— Daily Kos, 7/24/17

Seriously, “fact checking” is not that big a deal. Then again if you’re lazy and need to be spoon fed, going to Snopes has always been the easy way out.

Our legal team is fighting hard for us, but, having been cut off from all revenue, we are facing the prospect of having no financial means to continue operating the site and paying our staff (not to mention covering our legal fees) in the meanwhile.
— “SaveSnopes” GoFundMe page

Laura’s instinctive go-to is the Facebook accounts of the primaries involved. Their narcissism and need for attention exposes them almost every time.

As it looks like it takes a lot to keep up with David Mikkelson and wife Elyssa Young’s (currently listed as a Snopes “Admin Assistant”) financial responsibilities, let your own eyes determine their genuine level of need.

Judging by some of the above pics, did you get the impression the Mikkelsons like to eat out?

Thanks to those who generously donated to the GoFundMe campaign to keep them from going “broke”, it looks like the Mikkelsons will be able to maintain that lifestyle they’re accustomed to because as long as there are ignorant liberals, the dollar figure below will keep climbing. 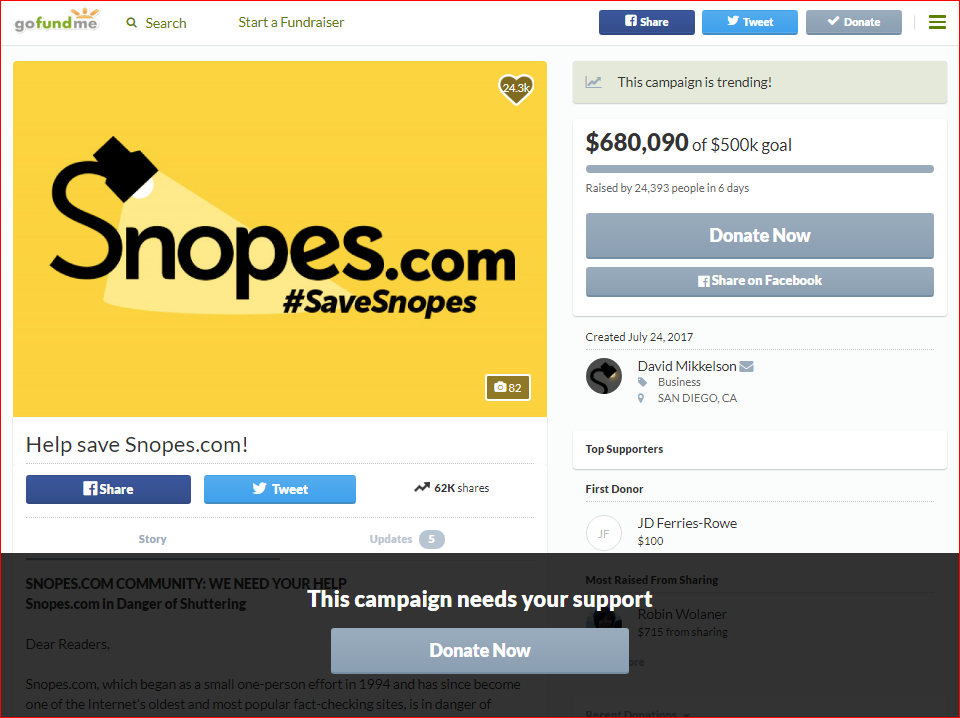 Fact-Checker Snopes.com Met Its $500,000 Crowdfunding Goal In A Day

As we ARE talking about sanctimonious liberals without conscience, here’s a fact check of just whom we’re dealing with here.

SO, was Snopes really going broke or was this a slick excuse for a fundraiser so David Mikkelson and Elyssa Young “Erin O’Bryn” Mikkelson can not only meet payroll but maintain an opulent lifestyle?

Speaking of “Erin O’Bryn”, when you click on the link, you get a brief runaround and with good reason. 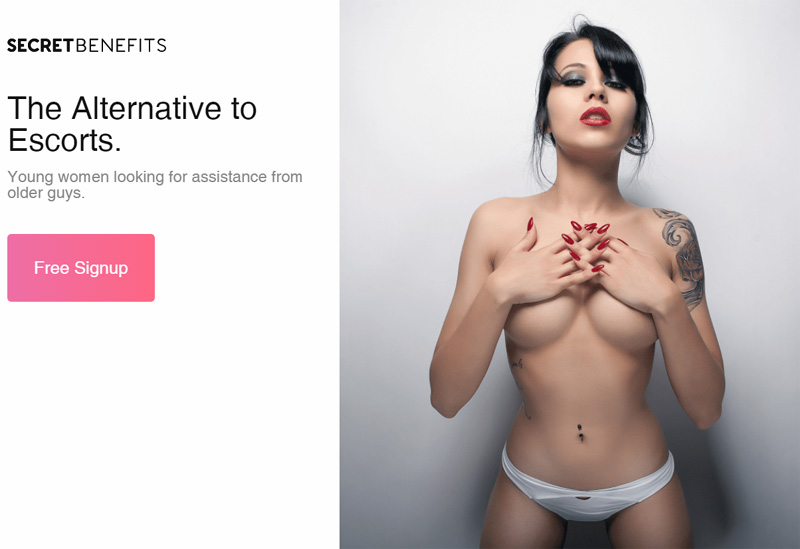 Hmm… like the Southern Poverty Law Center, liberal nonprofits tend to like stashing their money in the Caymans and the Mikkelsons DO like to travel, so a slight detour is entirely possible. If Mrs. Mikkelson is still involved in her former trade on the side, those who donated might be slightly taken aback, but back to the original issue.

One could advise the primaries not to spend on fairly frequent and vacations while the business is on shaky ground. Then again, we are talking about social liberals who claim to be keeping us all on the straight and narrow.

The Poynter Institute let the cat out of the bag.

Snopes met its $500K fundraising goal. Now what?
In one day, Snopes received more than $500,000 worth of donations from nearly 20,000 people on GoFundMe in order to keep its doors open.

“Stunned and humbled by this. The money is incredibly helpful. The support is priceless,” Managing Editor Brooke Binkowski wrote in a tweet Tuesday. “We won’t forget. Thank you.”

And “forget” they sure as hell didn’t.

One would think after successfully reaching their goal, Snopes would gratefully end their GoFundMe campaign. Then again, as long as there are lazy sycophants, Snopes will keep their hands out for the cash. 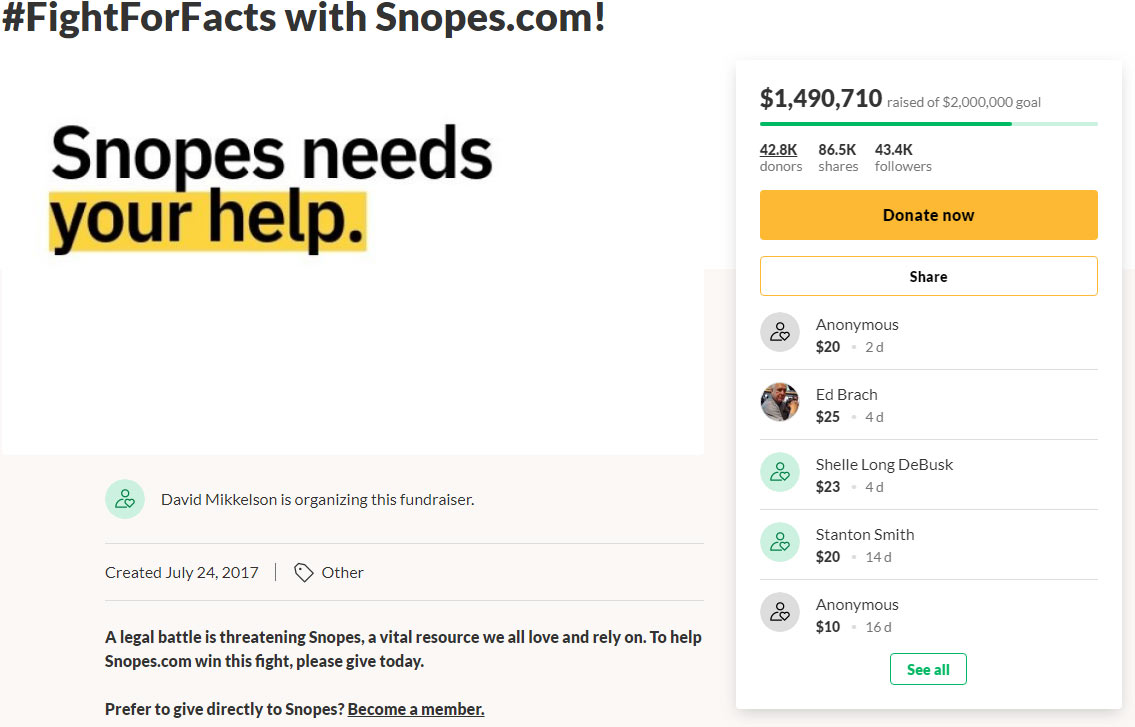 So now that they’re out of the red, what exactly is Snopes using the money for?

“The money we raised will be used to meet our basic operating expenses, the overwhelming bulk of which is the salaries of our staff,” Snopes founder David Mikkelson told Poynter in an email Tuesday.

And a modest vacation from time to time.