Unfortunately, some conservative women know what it’s like to be a black Republican.

First of all, Playboy thought this would be great to alert the blogs about this insightful piece of commentary…

Hello —
I just wanted to pass on the link to “So Right It’s Wrong,” an article on the top 10 conservative women we hate to love. It just went live on our site this morning.
http://www.playboy.com/articles/playboy-forum-the-top-10-women-conservatism/index.html

Of course, after the unexpected condemnations came in, Playboy scrubbed the page from the Internet.

Secondly, for some strange reason Politico’s Anne Schroeder Mullins didn’t see much of an issue and almost apologized, not for Guy Cimbalo’s poor choice of sentiment, but that the tightly-wound got all worked up in the first place.

Obama promised us the dream of post-partisanship—a cuckoo land where party affiliation and factional animosity were forgotten. Turn on cable news or open any newspaper, however, and you’ll quickly discover that the dream has yet to materialize. But there is a way to reach across the aisle without letting principles fall by the wayside. We speak, naturally, of the hate fuck. We may despise everything these women represent, but goddammit they’re hot. Let the healing begin.
— The Top 10 Conservative Women We’d Like To Filibuster

Mr. Cimbalo’s personal appearance implies someone who has to pay for it, and if all else fails….

Of course, in Cimbalo’s serial rape fantasy, the women are, quite literally, asking for it. There’s nothing they want more than for Guy Cimbalo to teach them a sexually degrading lesson. Apparently “bilious simpleton” Elisabeth Hasselbeck “wouldn’t mind putting [her Catholic school uniform] on before taking it off for a session of sweaty, anti-American hate f***ing. And Malkin’s “tight body and get-off-my-lawn stare just scream, ‘Do me!’”
— The New Agenda, 6/1/09

Since Playboy was so pussified as to removing the offending piece, please allow me to share with you some of Mr. Cimbalo’s musings… 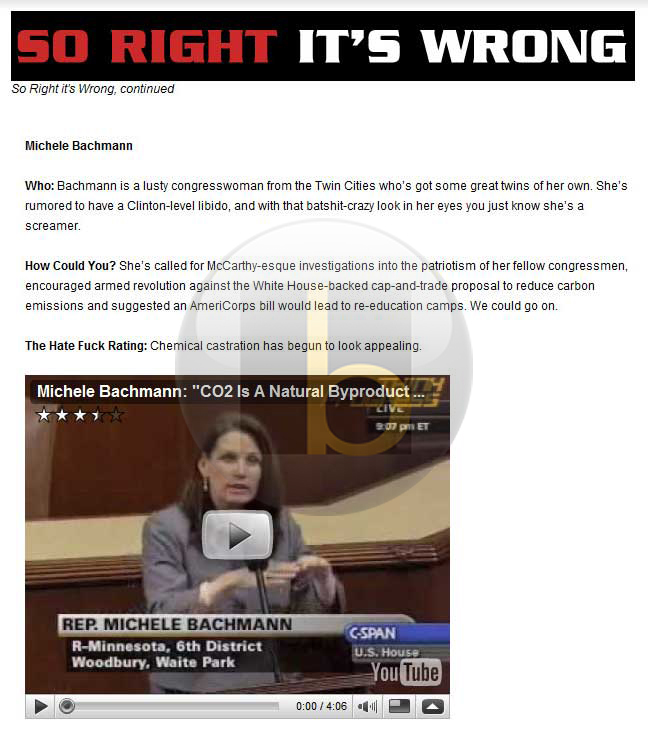 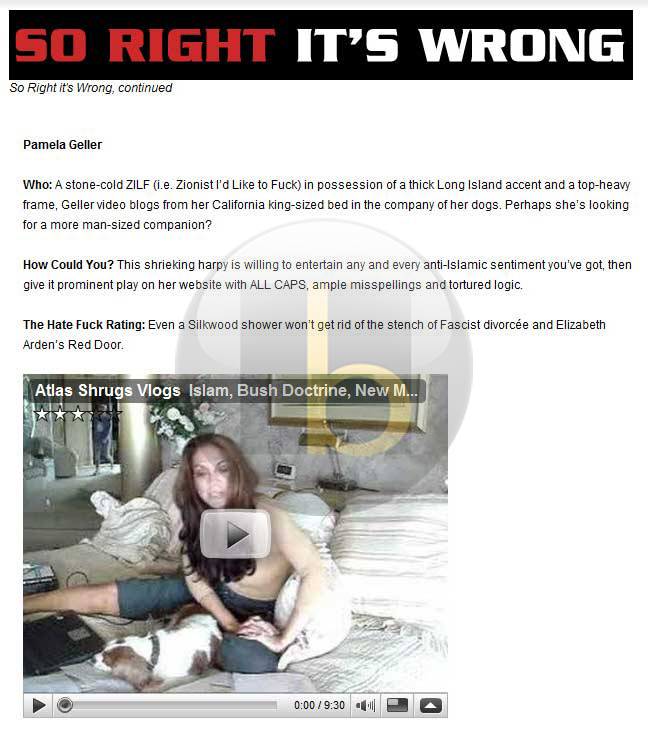 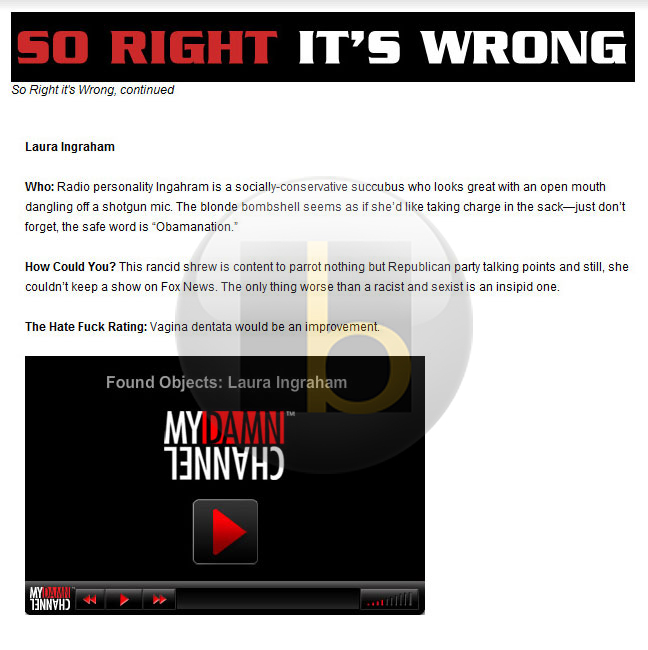 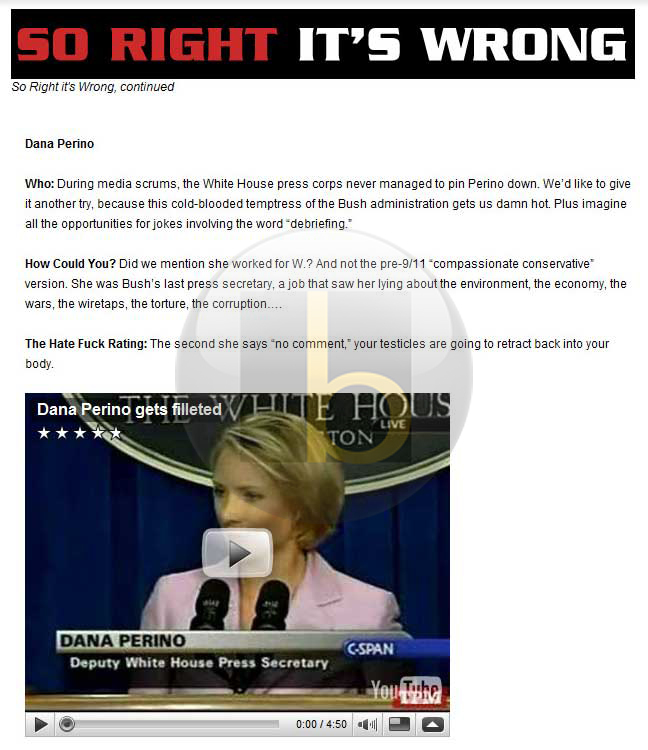 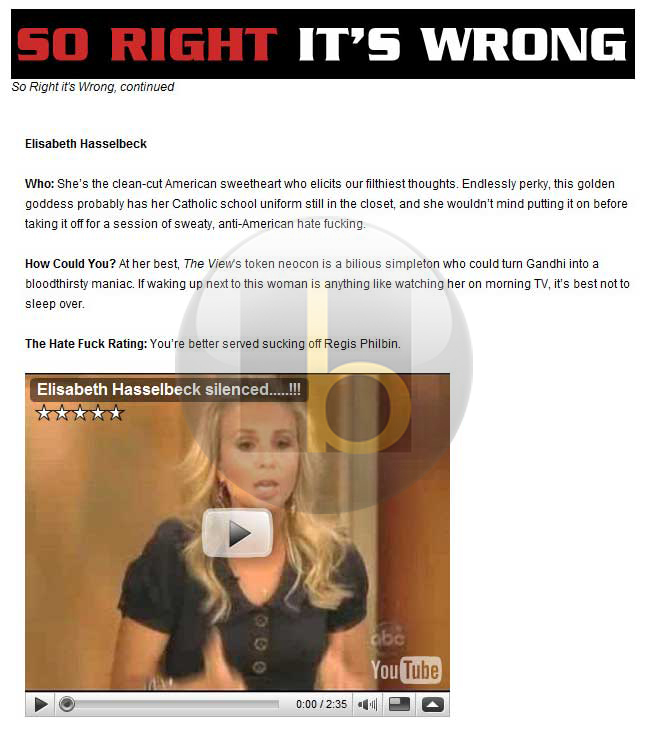 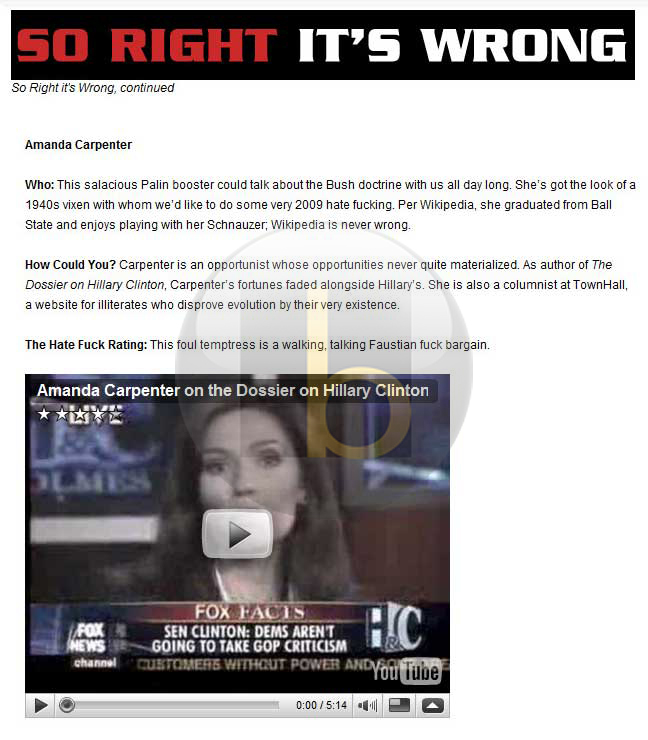 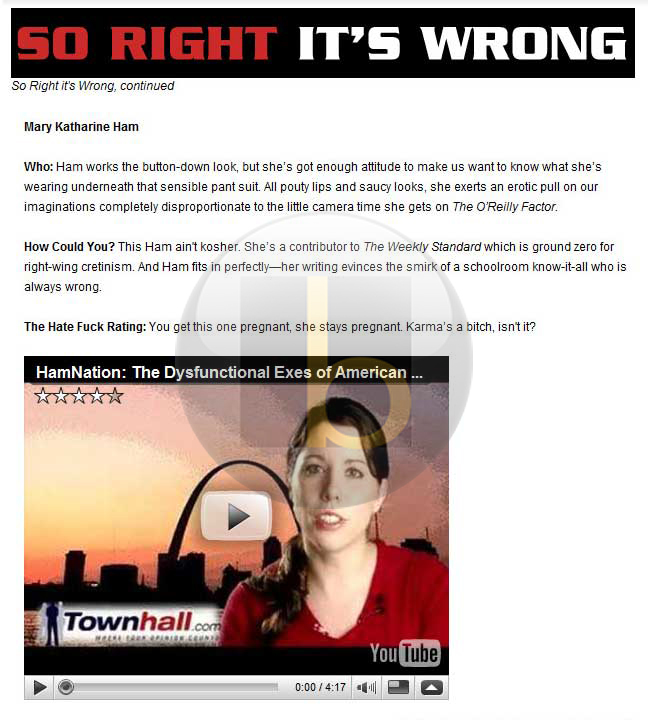 #2. Megyn Kelly
“You need to flagellate your genitals for wanting to fuck this woman.” 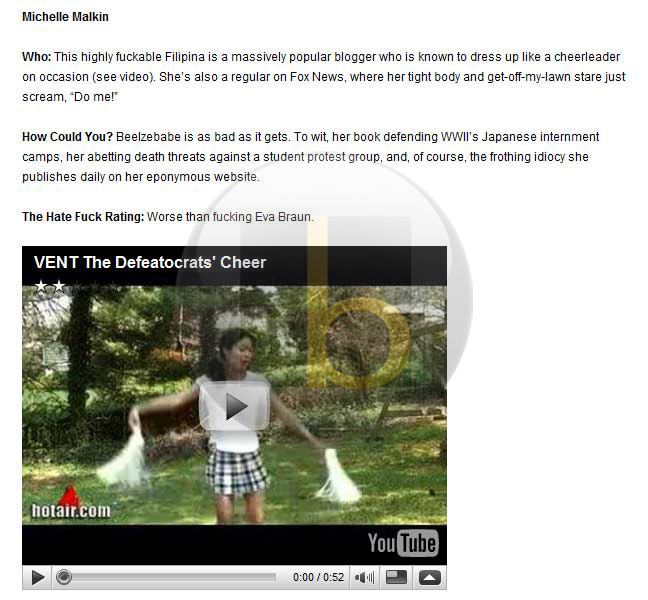 Now, I try to be very careful when commenting on the personal appearance of others, but rape may be the only way this Guido-lookin’ Guy Cimbalo can get any. Obviously liberal women aren’t knocking down his door so he needed to lash out at what he deems unattainable.

The fact that he felt comfortable writing this shows that there is clearly a double standard. If ANYONE, let alone a conservative, had written about liberal women worthy of being raped, that person would be lucky if he’d ever be able to show his face in public again. The media would be running leads on this, and ACORN would be sending bus tours to picket his home.

But notice how little you’ve heard about this?

That’s because conservatives, in the liberal mind, should be raped or worse. Sarah Palin can be hanged in effigy with nary a word from feminist organizations (NOW commented only after being contacted by Hasselbeck). A Top 10 list of potential rape victims can be created by a Playboy writer, and still silence from the liberals.

Do we now see whom we’re dealing with?