As a resident of Massachusetts, I see real parallels between the rise and fall of our first black governor Deval Patrick, and the rise and coming fall of the first black president, Barack Obama. Let’s get to some politically incorrect, uncomfortable-to-say for some, specifics.

The Ballot Becomes The Race Card

Both Deval Patrick and Barack Obama had the same campaign guru: David Axelrod.

Using white liberal guilt to his political advantage, Axelrod created candidates that were immune from the normal political vetting process, as any attempt to do such would be called veiled racism.

With that, they ran with vague slogans that touched at progressive heartstrings, and they did. Patrick’s “Together We Can” worked so Obama’s “Yes We Can” slogan again offered what the beholder thought he or she wanted, without the nasty details.

Again hiding behind the race smear, virtually no one pestered the candidates for details of what they planned on doing once in office. Patrick and Obama were allowed to say whatever they wanted to make the voters feel better about making history. The beauty of this strategy was that any opposition to these candidates had the typical racially correct response in the waiting. 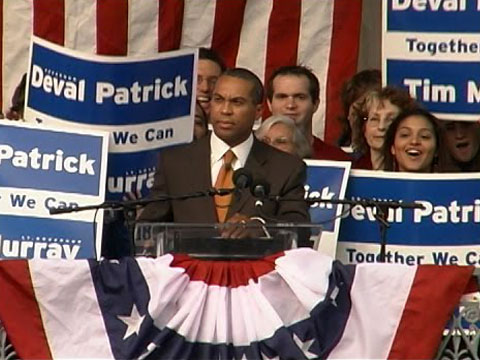 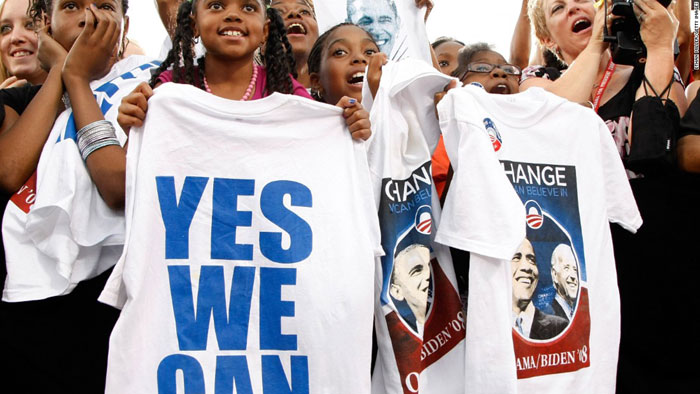 With Patrick’s victory, Axelrod found his template and with Barack Obama, took it national.

Granted, it’s neither of their fault, but liberals really prefer halfrican Americans. If you think that’s an over-the-top assertion, take a look at all of the so-called pretty people Hollywood celebrates. A vast majority of the “black” female singers and actresses are light-skinned. With the exception of gangsta’ rappers and hip-hop thugs, a good number of black males in entertainment aren’t dark.

This is not a true reflection of the preferences of the American people, but of the liberal racists who “discover” the new talent. Take a look at President Obama’s inner circle and with some exceptions, almost all are light-skinned black people; a trait someone must consider more visually acceptable to the American people.

Both Deval Patrick and Barack Obama are light-skinned. When choosing clients, that had to have weighed in on Axelrod’s decision: how to use race politics that will be the least offensive. Despite all the civil rights gains over the decades, there are still people who’d never vote for a black man, but if he weren’t so black…?

So by finding black candidates that spoke proper English and weren’t “threatening”, we had two candidates for high office that could be embraced by the mainstream while still maintaining the fear of a race label on those who would oppose.

History In The Making

Both Obama and Patrick had something going for them that few enjoy in their whole political career: historic firsts.

Media criticism during their campaigns was like watching someone walking over glowing coals. Each step was painful, but the anticipation of the next step was worse.

Deval Patrick was dogged by an issue during the campaign about his unapologetic advocacy of a convicted black rapist. The perp was black, the victim was white. Now if all the parties were white and the candidate were a Republican or Democrat, we all know how this would’ve ended up. But because two of the three involved were black, the media simply reported the issue, made no assertions, few follow-ups, and it went away because to push it…? Well, you know what that would’ve been called.

Barack Obama had his share of controversies, the thickest of which was that surrounding the Reverend Jeremiah Wright’s rather racist statements from the pulpit.

Because of the instinctive racial recoil, we were actually told to believe that Obama went to Wright’s church for twenty years and just happened to take selective Sundays off when Jeremiah went off. And leave-it-be the media basically did. Now, if John McCain or Sarah Palin’s pastor said “goddamn America”, that could have been a disqualifier, but as we were talking about a candidate that had to be treated with sensitivity, “goddamn America” was intellectually justified by the left and their media.

The normal criteria for being a chief executive and/or Commander in Chief, is someone who had to have the prerequisite experience. Normally governors are people who’ve held statewide office and whose track record was an open book. Normally presidents are people who’ve held executive private or public sector positions, had managed over legislative battles, and had the scars to prove it.

Neither Barack Obama or Deval Patrick had such experience, which is why I’ve called them both affirmative action hires and will continue to do so, as they both fit that make-up-for-history criteria.

Prior to becoming the governor of Massachusetts, Deval Patrick had NO elective office experience. Besides previously being an attorney and businessman, Patrick was a United States Assistant Attorney General under President Bill Clinton. Not to outright demean the value of such experience, but most gubernatorial candidates at least have had some election victories in the state they wish to lead. But where Affirmative Action applies, direct experience doesn’t matter. An opportunity for racial justice does.

We’ve all seen and heard about John McCain for decades. Who even knew Barack Obama existed two years ago, and who would’ve ever thought an unknown community organizer from Chicago would ever be president? If someone in Vegas can look into what the odds were when Obama first announced, I’d love to know. Can you imagine what a $50 bet on those odds would have paid off on November 4, 2008?

From what we know, Barack Obama was not the talented, skilled candidate we’ve all be told he is. Apparently, he used technicalities to have seasoned opponents removed from the ballot, whupped a principles-challenged, carpetbagging Republican Alan Keyes for the US Senate race, and after not even showing a molecule of humility in gaining some relevant Capitol Hill experience (basically a short-term party yes man), Barack Obama decided it was HIS time and made his move on the presidency.

Again, having white liberal guilt as his trump card, the only experience either of these candidates needed was that of oppressed minorities that lived in a world few in the mainstream could ever understand, or dare question.

That’s all they needed.

Both Deval Patrick and Barack Obama came into their respective offices with trumped up “mandates”. It was a glorious time of change and hope and together we can, and that’s all that mattered. We were all told to sit down, shut up, and give these men a chance to make things right.

His initial state budget-busting with a Democrat legislative supermajority wasn’t helped with his overspending on his office makeover. I mean, c’mon. What self-respecting black man spends $12,000 on drapes?

Deval Patrick did, as well as ditching the traditional Crown Victoria ride for the stereotypical, way more expensive Cadillac. Obviously as the first black governor, “Coupe Deval” believed he was entitled to these (and many other) perks of power, while lacking the humility to see how others not as fortunate viewed his excesses.

Barack Obama didn’t even wait for his election to declare “this is the moment, as Nancy (Pelosi) noted, that the world is waiting for.” While his personal gains weren’t as pronounced, his hubris has been duly noted.

His numerous Executive Order overturns of Bush Administration policy was a clear illustration of his disdain for what many of us consider respect of the previous occupants. But as his short term continued, he found himself continuing those liberally-hated policies because there was wisdom Candidate Obama wasn’t privy to during the campaign. Obama’s youthful arrogance continues to play out on a daily basis as he takes every opportunity to blame the former administration for the tough decisions he has to make, his penchant for talking down to the American children he leads, while taking credit for having the smarts to stay the course, even though by doing so he’s continuing where Bush left off.

Deval Patrick was essentially reigned in by the embedded Massachusetts Democrat machine. Barack Obama has been a bull-in-the-china-shop when it comes to his “transforming America” promise. The long term problem for Obama is that the people aren’t digging what he’s turning America into.

Despite the use of the race card to get him elected, would anyone of us believe that in less than four months the Obama Administration would be taking over banks, dictating how automakers would make product, changing Cuba policy, and getting away with foreign etiquette gaffes expected of George W. Bush?

Of course not, and if Barack Obama ran on that, even with RINO McCain as his weak opposition, he’d never have gotten elected.

6. The Future Is Not Bright

A recent Rasmussen Poll shows that there is a very strong possibility that Deval Patrick will be a one-term governor. Note his using any and every opportunity to be seen with fellow Chicago homie Barack Obama in D.C.

Patrick repeatedly says he’s not interested in accepting a cabinet position in the Obama Administration, but as of November 2010, he may find himself out of work like the rest of us.

President Obama could face a similar fate in 2012.

In four months, Barack Obama has done more damage to the nation we once called The United States of America than any president we’ve been alive to witness. Imagine how bad things may get next month, let alone next year, and the American people will soon tire of his “I inherited this” excuse.

And despite all the hype, I don’t believe Barack Obama is this outstanding orator and politician.

Barack Obama is a good reader but as evidenced by his tendency to um and ahh when off prompter, we can be justified in questioning his intelligence as we really don’t know who’s writing the glowing passages he reads. Just what would the media and the left be saying about George W. Bush if he had to read answers in a press conference off a teleprompter, and everyone would be speculating who was scripting him.

Let me take that back.

The next black person who runs for those seats, if they have any hope of winning, will be Republicans, because memories of those who broke ground before them will be an open wound. Barack Obama and Deval Patrick will quickly become stereotyped adjectives, and we all know most stereotypes have a basis in truth.