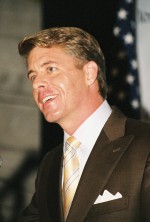 BOB: Hi Jimmy, just wanted to touch bases and find out what your thoughts were about the rather rude outburst by that punk at CPAC. I was getting ready to videotape a following speaker and found the kid’s comments rude and uncalled for.

JIMMY LaSALVIA: It was unfortunate that happened. You know there was a little controversy when we signed on as co-sponsors back in December, but I thought all of that had blown over. I was surprised when Ryan Sorba made those remarks, but it was heartening to see and hear the crowd boo and voice disapproval.

BOB: Why was there controversy? I can imagine but let’s hear it from you. Considering we’re all Republicans and we probably vote close to each other on the issues, what was the problem?

JIMMY: There are some on fringe, some single issue groups, who disagree with GOProud on an issue or two. They threatened to boycott CPAC, but in the end most everyone was there. It was the biggest CPAC ever. I always tell people that there is a difference between policy and principles. We can disagree on some policies, but we share the same conservative principles.

BOB: Specifically, where was the agreement and disagreement?

JIMMY: We happen to believe that it’s a conservative position to be in favor of marriage equality for same sex couples. We believe that marriage is good for society and that gay and lesbian couples should be included in civil marriage. Some disagree with that position. They also may disagree with our position that gay and lesbian servicemembers should be able to serve openly and honestly. Human Events Magazine’s “Conservative of the Year” Dick Cheney agrees with us. We are proud to stand with him.

BOB: Okay, let’s tackle these one by one. Marriage. First of all, I’m glad you didn’t use the activist line equating gay marriage to the black experience when interracial marriage was discouraged. But here’s my take on this.

JIMMY: First let me say that the vast majority of conservatives agree with most of our legislative priorities, outlined here, then, we can get to marriage.

BOB: I know of few conservatives that have an issue with civil unions for the obvious legal reasons. Should I and a woman decide to get married tomorrow and then we filed taxes, the IRS wouldn’t recognize the marriage because we didn’t get a marriage license, the equivalent to a civil union. Marriage is, in my opinion, what the fringe decided to use to basically give a middle finger to the church that’s almost always opposed gays. “Marriage” is totally unnecessary to the legal remedies gays sought.

JIMMY: I would disagree in that I know VERY few conservatives in elective office who would sponsor or even vote for civil unions. The fact is civil unions are available to many people in this country. Second, you know that there is a big difference between civil marriage and religious marriage… and there should be….religious institutions should be left alone to come to their own conclusions on the issue. But you are right, that most of the legal issues revolve around taxation, immigration, and inheritance. There are some private contracts that help with some of those issues, but legislative remedies are required for the vast majority of them. There are conservative solutions that would uniquely help gay and lesbian couples navigate some of those problems. For instance, if we did away with the IRS and instituted the Fair Tax, that would take care of a lot.

There are countless other examples of that type of solution that we can pass today. Then, we can continue the dialogue on marriage. That’s an issue our country will be debating for some time to come.

BOB: I mean, I’ve heard people like Sean Hannity on television argue that gay marriage minimizes the sanctity of marriage and no disrespect intended, but there’s no gay man or lesbian woman who can diminish what I would have with a woman, and if it can someone else’s, then that’s their problem.

JIMMY: I agree. Divorce is the biggest threat to marriage gay or straight! Again, we should be mindful that civil marriage is a government institution, no sanctity in government.

BOB: Let’s move on to gays in the military.

BOB: While serving in the Navy, I had a supervisor who was gay. He wasn’t in your face about it, and because he was (and everyone knew it), he had to be doubly squared away. Through him, I became a much better writer and journalist and our department won two Chief of Information 2nd Place awards for excellence amongst 600 ship and shore commands. With that, why would there be a need for him to come out and force his sexuality on his shipmates?

JIMMY: I don’t think it’s a matter of forcing his sexuality on anyone. It’s a matter of whether he has to lie about it or not. Listen, conduct should be appropriate in the military no matter who you are. But gay and lesbian servicemembers are forced to lie everyday, just to serve their country. It can be significant, like who should we inform if you are killed or wounded? or somewhat trivial just in conversation like “what did you do when you were on leave?” In 2010, our fine servicemembers are more than capable of doing their jobs as professionals whether straight or gay…we shouldn’t make some of them lie in order to do it.

BOB: See, I served before “Don’t Ask, Don’t Tell”, so no one had to “lie” because it was nobody’s business.

Here’s the issue. I think the average civilian would be shocked if they saw just how cramped living conditions are on a ship. I can’t speak for shore or ground commands as I spent 85% of my time at sea, but when you’re in such close quarters, there’s no need for any sexual distractions, whether it’s with gay men or hetero women. The military is a business; a business carrying out and winning war, not social experimentation.

JIMMY: You probably knew which of your shipmates were married, or who had a girlfriend, or any other number of facts about their personal lives. It is a fact of life that we get to know our colleagues in the workplace. Again, the military has strict rules of conduct that should be followed.

I think that we will have to agree to disagree on this issue. I suspect that there is a lot more that we will agree on.

BOB: Yeah, you should read some of my discussions with and or about the Paulies. Disagreement, big time.

Black folk ask me why I’m a Republican and I can cite civil rights history, as badly rewritten as it’s been. When asked why you’re a Republican, what do you say?

JIMMY: I say that I believe in limited government, free markets, strong national defense, less regulation, etc,,,, I understand that the GOP hasn’t always followed those principles, but I find myself more closely aligned with Republicans than Democrats. A lot of gays and lesbians can’t understand me either! It’s sometimes hard to defend to gay people, because in recent years there have been some prominent Republican politicians who have said horrible things about us. As you know, they are in the minority, but they don’t make it easy on us gay Republicans.

I don’t know about you, but when I see Republican candidates winning elections all over the country (McDonnell, Christie, Brown, et al) by focusing on the priorities of the American people – jobs, economy, national security, I am very encouraged. I think more and more gay people will take a look at conservative candidates when they focus on those issues. Do you feel the same about black voters?

BOB: No. Being black and Republican is not an everyday decision made. While politicians encourage people to become active, black Republicans are routinely harassed and demeaned, and I can see why blacks who have Republican leanings stay in the closet, as it were. I’ve been doing this long and publicly enough that my skin is very thick, but I understand why some people just don’t need the hassle.

Now, I have a question I’ve been dying to ask a gay person.

BOB: How do you feel about gay pride parades. Personally, I cringe when watching rap videos because of the impressions it leaves on others of who black people are. Do you see gay pride parades, as lewd as some can be, as a serious PR blunder?

JIMMY: Certainly in this day and age, as more and more gay people have come out and live their lives openly and honestly, the stereotypical images of pride parades don’t accurately portray the reality of the lives of the vast majority of gay Americans. For the most part, we are just like everyone else…sitting at home on the couch as boring as most other folks watching those nuts on TV! Yes, I suspect it’s very similar to your reaction watching stereotypical images of black people. The best thing that gay people can do (from a PR point of view) is just live your life like any other person, and the rest of America will realize that we are no different than them.

BOB: Jimmy, let’s do this again. I will say this: I respect the fact that not once during this conversation did you liken the present-day gay experience to what blacks endured decades, if not centuries ago, as many liberal gay activists do. As we both know, there is no comparison and I’m very happy you didn’t go there. This would have been a very short conversation.

JIMMY: While I think that there are certainly things that gay people can learn from the struggle of black Americans, we are different and should respect those differences while working toward our common goals. Thank you for spending time with me this evening. I look forward to working with you in the future to achieve our common goals.