Eric Holder and Lenny Breuer Protected by Boehner the Wimp 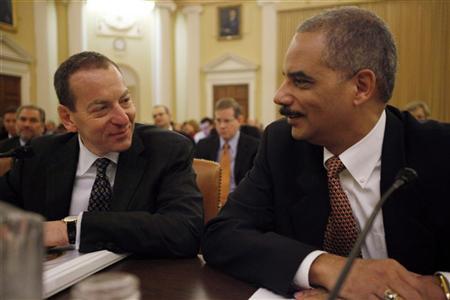 Eric Holder and his underlings at the Department of Justice lack ethics and pervert the law to the benefit of their chosen people.

According to the federal law in the Handbook of Ethics for the Department of Justice and the federal law: “If you are an attorney with the Department, you are expected to comply not only with the rules in this booklet, but also with relevant professional codes of conduct.” These relevant rules include the following disciplinary rule: (a disciplinary rule is one requiring sanctions by the court through bar committees) DR 9-101 [1200.45] Avoiding Even the Appearance of Impropriety. A. … 3. A lawyer serving as a public officer or employee shall not: a. Participate in a matter in which the lawyer participated personally and substantially while in private practice or non-governmental employment, unless under applicable law no one is, or by lawful delegation may be, authorized to act in the lawyer’s stead in the matter.

Have you wondered why the DOJ has not prosecuted anyone for the derivative fraud or why the DOJ settlement is opposed by all 50 States with mortgage lenders? Look no further than the Attorney General and Lenny Breuer, who is head of the DOJ criminal prosecutions, and then connect with the ethic rules above. Note that, “while Holder and Breuer were partners at Covington, the firm’s clients included the four largest U.S. banks – Bank of America, Citigroup, JP Morgan Chase and Wells Fargo & Co – as well as at least one other bank that is among the 10 largest mortgage servicers. … Covington represented Freddie Mac, one of the nation’s biggest issuers of mortgage backed securities, in enforcement investigations by federal financial regulators. A particular concern by those pressing for an investigation is Covington’s involvement with Virginia-based MERS Corp, which runs a vast computerized registry of mortgages. …MERS, which stands for Mortgage Electronic Registration Systems, has been at the center of complaints about false or erroneous mortgage documents. Court records show that Covington, in the late 1990s, provided legal opinion letters needed to create MERS on behalf of Fannie Mae, Freddie Mac, Bank of America, JP Morgan Chase and several other large banks. It was meant to speed up registration and transfers of mortgages. By 2010, MERS claimed to own about half of all mortgages in the U.S. — roughly 60 million loans. But evidence in numerous state and federal court cases around the country has shown that MERS authorized thousands of bank employees to sign their names as MERS officials. The banks allegedly drew up fake mortgage assignments, making it appear falsely that they had standing to file foreclosures, and then had their own employees sign the documents as MERS “vice presidents” or “assistant secretaries.”

Lenny Breuer admitted his errors in Fast and Furious without consequences. Darrell Issa, House Oversight Committee Chairman, had subpoenaed e-mails between Breuer and Holder in regard Fast and Furious, but there was no compliance. Then, there is Holder claiming no knowledge of the bribed DOJ prosecutors in the Virgin Islands. “The DOJ never acted on the sealed indictments, which were the consequence of a lengthy criminal scheme involving bank fraud and other financial crimes. … U.S. Virgin Islands Gov. John de Jongh, a Democrat, was personally on the receiving end of a portion”

Here’s what the FBI has to say about public corruption: Public corruption poses a fundamental threat to our national security and way of life. It impacts everything from how well our borders are secured and our neighborhoods protected…to verdicts handed down in courts…to the quality of our roads, schools, and other government services. And it takes a significant toll on our pocketbooks, wasting billions in tax dollars every year. The FBI is singularly situated to combat this corruption, with the skills and capabilities to run complex undercover operations and surveillance. Eric Holder is charge of the FBI.

Why should Republicans tolerate the corruption of Holder and Breuer? House Speaker, John Boehner, is protecting Holder and his gang and trying to make a deal with Holder to avoid a criminal contempt court action against Holder which Congress would easily win.   Is it because V. I. Governor de Jongh pulled the race card with,“It is a sad day in our nation when reckless allegations can be published without substance or verification as part of the smearing of our President or his Attorney General. This kind of broad brush stereotyping was shameful in the days of Jim Crow, and it is more so today?” So, Boehner won’t be called a racist and will be a nice guy? Boehner participates, along with Holder and Breuer, enabling total public corruption and the perversion of US Law and the US Department of Justice.   Leo Durocher of the Brooklyn Dodgers, expressed it best, “Nice guys finish last.”

Johnny Boehner, pudding and pie, tried to to kiss a Democrat and it made him cry. When the boys came out to play, Johnny Boehner ran away.