Trolls: Bravery of the Liberal Anonymous 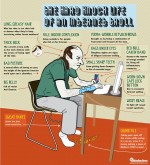 We know them well… kind of.

While we’re told we live in an age where free speech is embraced, there are those who just can’t let people discuss their points of view without interjections that are personal and vile.

As a matter of full disclosure, I don’t spend my time scouring progressive posts just so I can pick fights in comment forums. First of all, those I would be insulting would know who I am because I either go by “Bob Parks” or “BlackAndRight” so I’m easily spotted. But many of these trolls engage in personal attacks that are sometimes totally unrelated to the topic in an effort to discourage the very free speech they claim to champion.

And now there’s scientific proof that these people are truly assholes.

Online trolls have serious personality issues such as Machiavellianism, one of the biggest studies into trolling has found. Researchers say that online commenters display traits that are Narcissistic, psychopathic, and sadistic and the worse the problems, the longer the person spent online.

They found the most common trait was to exhibit sadistic behaviour.

Researchers constructed the the Global Assessment of Internet Trolling, or GAIT, containing the following items that trolls were found to agree with:

I have sent people to shock websites for the lulz.

I like to troll people in forums or the comments section of websites.

I enjoy griefing other players in multiplayer games.

The more beautiful and pure a thing is, the more satisfying it is to corrupt.

I’m waiting to see a survey where they determine the political leanings of trolls.

That will be quite illuminating as if most trolls were conservative, it would be something we’d already have heard about.