DHS Misinformation Bully Nina Jankowicz, In and OUT Within a Month

With great fanfare, the Biden administration will unleash their latest mechanism to save Democracy, led by a previously irrelevant partisan millennial. 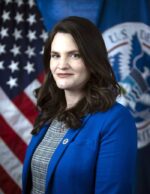 Nina Jankowicz is President Joe Biden’s pick to serve as executive director of the Department of Homeland Security’s new Disinformation Governance Board—and her appointment has already met with some controversy.
— Newsweek, 4/28/22

“Controversy” is an understatement.

Nina Jankowicz is a classic test case for the liberal affliction known as psychotic “projection”. 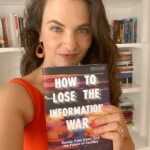 So, who exactly is Nina Jankowicz? Certainly, not a person with any concerns about preserving freedom of speech or expression. A quick look at her Twitter history is enough to dispel that. When Facebook permanently banned Donald Trump from its service, Nina was in the wings complaining that this punishment was not harsh enough. Through a metaphor, Nina explained that only mass bans on hundreds or thousands of accounts would be enough to “fix” the disinformation “problem.”
— Revolver News, 4/29/22

So, why this now? Why is Joe Biden okay with forming such an ominous-sounding agency within DHS. Knowing Joe as we all do, it CAN’T be Joe’s idea or regarding Elon Musk’s acquisition of Twitter. What is this really about?

Could it be between now and the midterm election, a couple of major players in the Democrat Party could be at the center of uncomfortable attention; a couple of Democrats who MUST be protected at all costs?

During a speech at Stanford University on Thursday, former U.S. President Barack Obama presented his audience with a stark choice: “Do we allow our democracy to wither, or do we make it better?” Over the course of an hour-long address, Obama outlined the threat that disinformation online, including deepfake technology powered by AI, poses to democracy as well as ways he thought the problems might be addressed in the United States and abroad.
— Stanford News, 4/21/22

The committee for Hillary Clinton’s 2016 presidential campaign is seeking to block Special Counsel John Durham from obtaining certain documents related to law firm Perkins Coie and its work with the campaign, the Democratic National Committee and opposition research firm Fusion GPS. Hillary For America and the DNC are the holders of the privileges at issue, according to the filing.
— Fox News, 4/29/22

Interesting how this “disinformation” topic came out of nowhere and considering how many media outlets still have egg crusts on their faces for distributing Hillary’s Trump-Russia-collusion bullshit for four-plus years that distracted a presidential campaign, hampered a transition team, and kneecapped a presidency. It had to have been green-lighted by Hillary and Obama had to have known.

John Durham knows. He just has to have every i dotted and t crossed before he certifies proof of the greatest political scandal in American history. And when that happens, all involved in the conspiracy can’t depend on the legacy media to do all the heavy lifting. They’ll need something more and this is where Nina Jankowicz comes in.

Of all the old-and-reliable useful idiots Biden (or whomever) could have appointed for this DHS gig, he chose an expendable nutcase who’ll fit nicely under the bus when she goes after anyone and everyone who reports what may be coming from the special counsel. As usual when in the company of the like-minded, people like Jankowicz feel free to tell the truth about who they are, what they want, and what they’re willing (or not) to do to get it….

President Biden’s new disinformation czar Nina Jankowicz once belted out a raunchy parody version of a Christmas song — changing the lyrics to ask who she needed to “fuck” to be “famous and powerful,” according to resurfaced YouTube footage. “I want to be rich, famous, and powerful! Step on all my enemies and never do a thing,” Jankowicz sang in the clip from 2015.
— New York Post, 4/30/22

Looks like she got what she wanted. How…? We won’t ask. 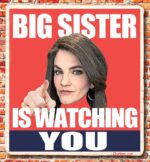 Instead of being banned from a social media cite, Jankowicz could conceivably send goons with sub-machine guns kicking in the doors of Americans who shared a post embarrassing to Joe, Barack, Hillary, and Democrats as a whole.

After all, some things take relatively small amounts of intelligence to pull off.

So while it will be formerly known as the Disinformation Governance Board, it’s really going to be Disinformation Projection Board because like most of the so-called scandals specifically blamed on President Donald Trump, it turns out the Democrat left actually did the things the accused others of doing with no accountability.

It would appear the bully got too much a taste of her own medicine, and like most bullies, she ran away.

The Biden administration has “paused” its controversial plans to create a Disinformation Board, causing its would-be leader to resign.

In a statement Wednesday, Nina Jankowicz, the “disinformation expert” tapped to head the panel, said that “[w]ith the Board’s work paused and its future uncertain, and [sic] I have decided to leave DHS [the Department of Homeland Security] to return to my work in the public sphere.” Jankowicz’s departure and the decision to scrap the board was first reported by the Washington Post.

Whenever a liberal claims to be “mischaracterized”, it means uncomfortable truth was made public.

Jankowicz’s idea of standing up for the First Amendment included letting “verified” Twitter users “edit” other users’ tweets if the blue-checked chosen think they’re misleading. Jankowicz also repeatedly tried to spread doubt about The Post’s own reporting about Hunter Biden’s notorious laptop, telling the Associated Press in October 2020 that it should be viewed as “a Trump campaign product.” In addition, Jankowicz pushed the since-debunked claim in 2016 that then-presidential candidate Donald Trump had a tie to Kremlin-linked Alfa-Bank, an allegation at the center of an ongoing trial of a Clinton campaign lawyer accused by special counsel John Durham of lying to the FBI.

The misinformation maven was also ripped for a bizarre TikTok performance from February 2021 in which she altered the lyrics to the “Mary Poppins” song “Supercalifragilisticexpialidocious” to be about fake news.
— New York Post, 5/18/22

Jankowicz probably had been working on a landing spot long before her “announcement”. She’ll be back at work creating musical, pro-Democrat misinformation soon enough. After all, it IS what Nina does best.