While the Deferred Action for Childhood Arrivals executive action by former President Obama has been rescinded, one question has never been asked or answered by the activists or media supporting them: why is the law against illegal immigration being blamed and not the illegal alien parents who sent their children to the United States without them?

Parents with DACA are wrestling with the question of what to tell their children, and whether it would be best to leave them in the United States or take them away if they are forced to leave.
— Vox, 9/1/17

This is something “parents with DACA” should have wrestled with BEFORE they decided to violate the United States’ sovereign border because THEY wanted to, assumed THEY were wanted here, and shortsightedly put their children in the legal limbo they find themselves in today.

Sen. James Lankford (R-Okla.) on Monday responded to a report that said President Trump will end the Deferred Action for Childhood Arrivals (DACA) program, saying in a statement, “It is right for there to be consequences for those who intentionally entered this country illegally. However, we as Americans do not hold children legally accountable for the actions of their parents.“
— The Hill, 9/4/17

Well, that kinda’ conveniently lets everyone off the hook… again.

Not once can we remember a DACA child admit their parents are to blame for their current predicament. Illegal immigration is the ONLY felony committed in the United States where, since so many millions have violated it, there’s a political desire by opportunists to change the law. As we’ve argued before, the laws against grand larceny would never be changed even if millions decided to rob banks in order to provide a better life for their families, yet millions can violate our immigration law and be declared a victim deserving of sympathy.

The law is quite clear.

The law doesn’t say anything about leniency for children being brought into the United States by parents who, by the very action of sneaking in, knew they were breaking the law. They just never believed THEY or their children would be caught and held responsible for their illegal actions. 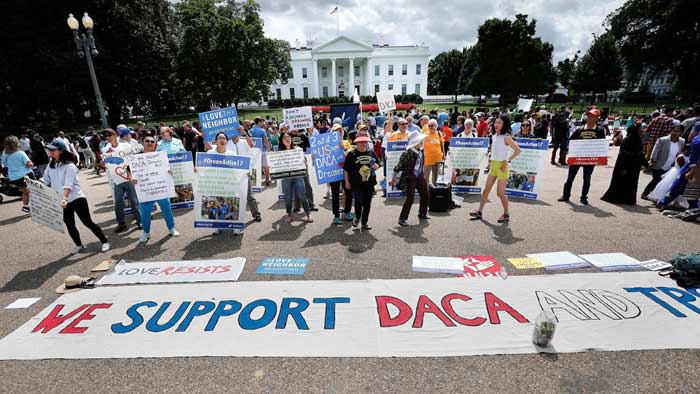 Those innocent children of illegal aliens need to have that conversation with their parents before they assemble in front of the White House and demand an exemption of federal law be made for them simply because those parents intentionally violated federal law and involved them as well.

President Obama’s executive action was unconstitutional. The parents of illegal aliens who brought children along for the ride when entering the United States, simply because they had the convenience of a border to run across and blew off the process many wait years to complete, are to blame here. NOT the American people, not immigration law, and not President Trump.

Univision anchor Jorge Ramos argued that the vast majority of illegal immigrants in America are just people trying to create better lives for themselves and their families.
— Fox Insider, 2/13/17

Try robbing a bank and once caught, argue that you were only trying to make a better life for your family and see how far that gets you.

It’s just a question if the willfully-undocumented, their children and supporters will ever accept responsibility for their illegal actions because they’re not expected to.

As a side note, Obama’s DACA executive order was in response to the thousands of children, sent unaccompanied by their parents, to the United States and the result was young people mixed in with the children brought into the country by their illegal parents who became known as DREAMers.

Not that anyone has intentionally misled the nation on the issue….