John McCain: The Redefinition of ‘Hero’ 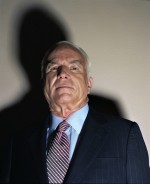 A lot of so-called Republicans were all up in arms because of the comment Donald Trump made about Senator John McCain.

Senator McCain is an American hero because he served his country and sacrificed more than most can imagine. Period. There is no place in our party or our country for comments that disparage those who have served honorably.
— Sean Spicer, RNC Chief Strategist and Communications Director

As a veteran, I will say this: John McCain is not God and it turns out, Trump hadn’t said anything new.

I have tremendous respect for McCain but I don’t buy the war hero thing. Anybody can be captured. I thought the idea was to capture them. As far as I’m concerned he sat out the war.
— Al Franken, 2000

Funny, I don’t recall any indignation then….

There are sadly hundreds of thousands of veterans who were injured while serving. Some were captured, tortured, and are still missing. Following his service (and with the valuable Republican connections of his second wife’s father) John McCain became a politician, neither of which makes him immune from justified criticism of his political judgment.

At a cocktail reception in Hawaii, he met a glamorous young heiress named Cindy Lou Hensley and, by all accounts, fell instantly in love. McCain spent months flying from Washington to Arizona pursuing this new relationship. Soon, the 43-year-old naval attache and his 25-year-old sweetheart were engaged.

There was only one complication: McCain was still married. 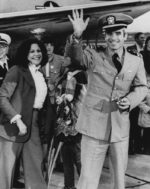 Carol Shepp McCain, then 42, had endured much in more than 14 years of marriage to John. She had raised their three young children alone while her husband languished in a North Vietnamese prison camp for 5 1/2 years. Her tribulations grew immeasurably after a near-fatal car accident that immobilized her for months and left her scarred for life. Despite their reunion and physical rehabilitation, by the late 1970s the McCains’ marriage had begun to crack, as John engaged in what he later termed “dalliances” with other women.

According to public records, he and Cindy received a marriage license in Maricopa County, Ariz., in early March 1980, four weeks before his divorce from Carol was final.
— Washington Post, 10/6/08

John McCain’s never come off as a very nice person but clearly someone who would fit in nicely on Capitol Hill.

His father-in-law, Jim Hensley, hired McCain into his beer-distribution company in Phoenix as a public relations man. The job enabled McCain to travel the state, where he made contacts with influential Republicans. By 1981, he was poised for his first run for political office, something he had considered for several years. The next year, McCain waged a successful campaign for an open House seat in Arizona’s 1st District.

There have been countless times McCain has mocked the conservative base, proudly fought against Republicans numerous times on key agenda items, foolishly sucked-up to the liberal media we all knew would tear him a new one during a presidential run, has a self-serving, narcissistic daughter who spits on our values at every attention-grabbing opportunity, and would gladly join the next “Gang” on a piece of legislation that would be injurious to the nation while he’s lived large on the taxpayer dime for decades. 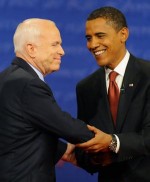 As one of many candidates running for 2008 office in Massachusetts, we were all hopeful of a campaign appearance from the top-of-the-ticket. I was taking to someone close to Sarah Palin, also hoping to get her to do a brief fly-in to our area as Democrats in our area were quite enthusiastic about her. That is until John McCain, in his infinite wisdom, decided to abandon New England and all of those Republicans working and running (until it was too late). You’d think a P.O.W. would be sensitive to the notion of giving up and hanging fellow soldiers and supporters out to dry.

Some of us increasingly annoyed at McCain’s repeated attempts to pass “immigration reform”, years of repeated Obamacare repeal-campaign promises arrogantly broken, and gladly appearing on any liberal news outlet that finds default disagreement for any Republican position. You’d think a P.O.W. would be sensitive to the notion of cozying up to the enemy.

Let’s not forget: the same two-faced liberal media punditry who’s eulogizing and instructing us all how he should be remembered today (he so often displayed the virtues of bipartisanship in going up against his own party) hated John McCain with a vengeance a short decade ago because he dared run against the candidate they authorized to be elected.

So let’s also not be hypocrites of convenience and suddenly now show reverence and respect to a man who did much damage to the Republican Party and its agenda for decades.

John McCain, last of the American heroes
John McCain and the Lost Art of Decency
For John McCain, it was always country first

He publicly disrespected voters, veterans, POWs and their families and the thousands who suffered by his repeated inaction regarding illegal immigration, the after-effects of Obamacare and his ill-advised forays in unsupervised foreign policy.

Remember him as he was and he’ll receive as much respect as he is due.