This is just another case of selective liberal outrage.

On one hand, the left demands divestment on any entity that has interests in traditional apartheid governments while others get a pass. Sports is a prime example.

How do professional sports teams get the money to pay their athletes outrageous contracts? The main source is multi-billion dollar broadcast deals where television networks pay for the rights to air each team’s games. The United States is a big market but pales compared to what a country with a population like China lures, so care is taken not to offend a partner of that size.

As the Official Multimedia Partner of the NBA in China, BesTV and SMG’s extensive media platforms will offer nearly 1,300 NBA games to viewers each year.
— China Daily, 10/10/16

Yes, we all do have freedom of speech. But at times, there are ramifications for the negative that can happen when you’re not thinking about others and you’re only thinking about yourself. So many people could have been harmed — not only financially, but physically, emotionally, spiritually. Just be careful about what we tweet, what we say and what we do. Yes, we do have freedom of speech, but there can be a lot of negative that comes with that, too.
— LeBron James, 10/15/19

Other liberals benefiting from financial arrangements with the Chinese communists have chosen to look the other way in silence. One decided to speak out and it didn’t go well. During a recent “All-in-Podcast episode, billionaire investor Chamath Palihapitiya spoke with fellow liberals and it didn’t go well. Most networks reporting on his honest assessment of the Uyghur plight only played a short clip of his offending comments.

It was a striking comment for someone who excoriated his fellow venture capitalists back in 2017 for being a bunch of “well-intentioned, soulless cowards.” Palihapitiya soon after released statements calling for “nuanced discussion” and saying that the clip was taken “out of context.”
— New York Magazine, 1/18/22

Here’s the full segment, in context….

While it’s commendable that Palihapitiya believes we should take care of Americans before we save the world, he conveniently failed to mention that almost everything the Democrat left has done to “help” blacks, in particular, has only made things much worse.

Needless to say, the blowback from his comments were swift. 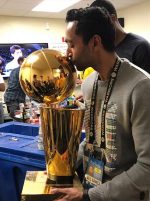 In a statement released Monday, the Golden State Warriors said, “Mr. Palihapitiya does not speak on behalf of our franchise, and his views certainly don’t reflect those of our organization.” Mr. Palihapitiya is a limited investor who has no day-to-day operating functions with the team, it added.

His comments on the podcast drew condemnation on Twitter.

Boston Celtics center Enes Kanter Freedom wrote, “When @NBA says we stand for justice, don’t forget there are those who sell their soul for money & business like @chamath the owner of @warriors.”

Mr. Palihapitiya is no minor player with a loose cannon of a mouth.

A Sri Lankan immigrant to Canada whose family got by on welfare payments when he was a child, Mr. Palihapitiya graduated from the University of Waterloo and worked at Bank of Montreal before moving to the U.S. during the dot-com era. He joined Facebook in 2007 to help grow its user base after stints at a venture-capital firm and America Online. He left Facebook in 2011 after he said Chief Executive Mark Zuckerberg denied his request to start a cellphone business, and later emerged as a critic of his former employer.
— Wall Street Journal, 1/18/22

Virgin Galactic distanced itself Tuesday from Chamath Palihapitiya, the chairman of its board of directors, after he declared on a podcast that “nobody cares” about China’s human rights abuses toward Uyghurs.
— New York Post, 1/18/22

The western world has been very kind and generous to Chamath Palihapitiya and his family. He’s been able to achieve and live a very comfortable life, thanks to nations that cared enough about the plight of those in shithole countries to allow his family to flee genuine poverty.

His callous indifference to those less blessed is so… progressive.