On Climate Change, Obama is ‘97%’ Consensus-Challenged

He’s in our face whenever he can be, mocking anyone who’d dare challenge him…. 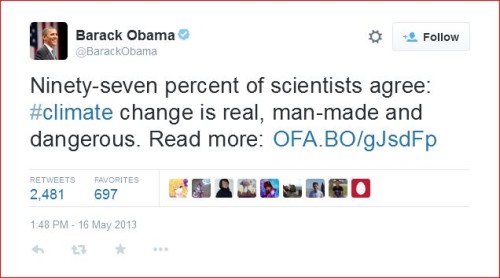 Again, just because Obama says so, doesn’t make it so, and “There’s no debate” is his presidential way of saying, “Shut the fuck up”.

However, we all know how ballistic liberals get when you present them with facts and numbers. 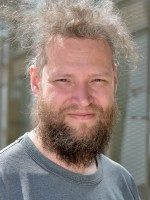 The 97 percent claim was taken from a study paper by Australian John Cook, Climate Communications Fellow for the Global Change Institute at the University of Queensland, and his colleagues, published in the journal Environmental Research Letters in May, 2013. The paper says nothing about the would-be dangers of climate change and it counts the number of publications, rather than the number of scientists, in support of human-made climate change.

Cook and Co. analysed somewhere between 11,944 and 12,876 papers – they can’t get their story straight on the sample size – but only 64 of these explicitly state that humans are the primary cause of recent global warming. A reexamination of their data brought that number down to 41. That is half a per cent or less of the total, rather than 97 percent.
— Richard Tol, professor of economics, University of Sussex

Even a second-grader could understand the difference between a “publication” and a “scientist”, but when you can rely on stoopids to repeat and defend something that’s easily provable as wrong, you get the Obama transformation of the word “consensus”.