While the left claims to be all things “for the children”, they continue to use them in ways that would make Joseph Goebbels proud. 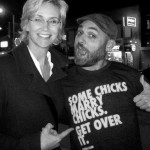 In the latest salvo against Republican presidential candidate Donald Trump, the Luke Montgomery-led “non-profit” DeportRacism.com (which makes no sense as most non-profits are .orgs, that is unless instead of promising to be nonpartisan, they want to make a profit off of being real partisan) has all guns blazin’. And using children is nothing new for Montgomery….

Published on Nov 3, 2015
Look out Trump! Latino kids born in the USA have got something to say as they hilariously let loose on Trump pounding his anti-Latino racism point-by-point like a piñata. Some will find what they say shocking (F-bombs ahead) but there’s no denying the math that you can’t win the White House without the brown vote. The first video from DeportRacism.com, an online movement to fight anti-Latino racism in the 2016 election.

We can only wait for the followup videos!

We’ll forgive the ignorance of publicly-educated children not knowing that Trump was referring to illegals when he referenced “rapists”, “murderers”, and “drug dealers” or the Bill of Rights comprising the first ten Amendments to the Constitution and NOT the 14th Amendment (which was written and ratified to redress black slaves, not illegal Mexicans).

The idiots who crafted this video were probably not prepared for the negative response, because we all know liberals expect everyone to think like them.

Then again, the general YouTube-viewing public doesn’t seem to be gravitating towards the DeportRacism message. Some of the comments reflect the disproportionate, thumbs-down dislikes as well….

When it comes to the proven vitriol of the left, backlashes are a beautiful thing.

This DeportRacism, anti-Trump, pro-illegal alien gesture may just be one of those moments to behold.

UPDATE: Trump blasts expletive-laden Hispanic advocacy video
BTW — We’ve downloaded the video. Liberals tend to try and make things go away when their strategies backfire and act like nothing happened. We’ll make sure this one isn’t forgotten!