Illegals: Since Millions Broke the Law, We Must Change the Law?

While CNN and other professional media outlets present illegal aliens as victims regarding their status during a Trump Administration, “immigration reform” has been the response to millions who’ve achieved fugitive status mere seconds upon violating our sovereign border.

Of course, CNN presents what they hope is sympathetic imagery of brown female victims of a heartless Trump Administration; not the many Latino males we see daily loitering in front of 7-Eleven, Home Depot, and Lowe’s awaiting law-breaking day labor exploiters.

Illegals can’t claim ignorance of our law because they intentionally came into the United States in a manner to evade the rules. But we’re now hearing all the sob stories because they now face a long-overdue reckoning for their criminal acts. 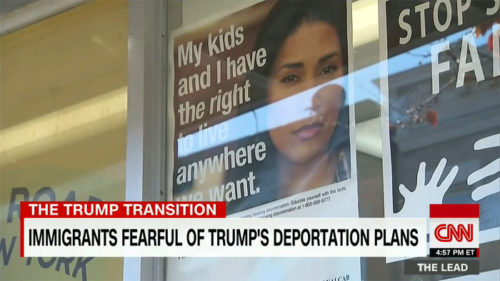 BTW — CNN used a shot of what would appear to be a sympathetic poster at an illegal alien advocacy dot.org in New York City, however the poster is actually a poster distributed by HUD against housing discrimination. But we all know what the “Reliable Sources” at CNN have to say about misleading and/or “fake” news.

Can anyone name ONE other law in the United States that’s said to be in need of “reform” because enough people have violated it? If millions of people decided to rob a bank tomorrow, will we see any lawmaker propose “grand larceny reform” in an attempt to grant amnesty to those millions who may have robbed a bank in order to provide a better life for their families?

And again, if illegals voted Republican, would CNN and Democrats be calling for “immigration reform” and/or amnesty? Probably not, in fact they’d be the first to call for illegals (not “undocumented”) being rounded up and deported as soon as possible since they’d be deemed a threat to national security.

And let’s not forget the words of esteemed Democrat Barbara Jordan in 1995 regarding illegal immigration and what she expected of so-called “reform” and those who’d benefit by it….

As said numerous times before, instead of illegal aliens or DREAMers getting in our face, demanding we look the other way while allowing them to tap into social services millions of Americans are ineligible for, they need to admit to themselves that it was THEY who broke the law. DREAMers need to get in the faces of their parents and demand an answer as to why they put their children in this perilous position in the first place and not demand United States law, knowingly broken, be changed for their convenience.