The “Alt-Right” was a media narrative delivered by the Hillary Clinton campaign to smear Donald Trump and his supporters as racists; a tactic routinely used by the Democrat left to distract from issues they can’t honestly debate.

Race has long been an unsettling undercurrent of the 2016 presidential race. But this week, the two major candidates forced that debate into the open with Hillary Clinton’s speech linking Donald Trump to the “alt-right” movement, and Trump’s new charge that the former secretary of state is “a bigot” who has pandered to minorities with feckless policies as part of a calculated quest for votes.
— CNN, 8/26/16

Racism’s been a consistent club used to bash Trump, especially after Breitbart’s Steve Bannon was picked to be an advisor within his administration. Breitbart.com is no more a white supremacist website than is any liberal media site, but Democrats are never hesitant to slander anyone or anything they deem a threat.

The “alt-right” narrative was explored during a group interview on the BBC, and the following is an excerpt of that discussion.

If a film or video is created and presents a particular point of view, the producer’s accuracy and motivations are appropriately scrutinized. However, when a film or video is self-labeled a “documentary”, it’s enjoys the immediate assumption of being an absolute truth which is why they permeate grade schools, colleges and are delivered to online platforms aimed at the impressionable. 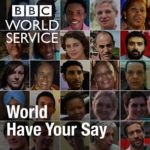 Yoni Appelbaum, Washington Bureau Chief at The Atlantic, got all butt-hurt when Bob dared challenge their “journalism” and accused The Atlantic of selective editing in their so-called “documentary” clip of The National Policy Institute’s Richard Spencer speech. While Applebaum said the entire video is “available online”, The Atlantic has provided no link to their original post to this day.

The full radio segment, America’s ‘Alt-right’, can be found on the BBC’s website.