The Democrats are uniformly doing all they can to save the “Affordable Care Act”, better known as ObamaCare.

The following should jar memories on where we’ve been led; a place Democrats don’t want the American people to go.

Democrats are playing mostly to the uninformed or those too young to know what life in the United States was like before ObamaCare was inflicted on the American people.

How many Americans are truly uninsured? The number the Obama administration and Democrats have used for more than a year now ranges between 40 million and 46 million—at the upper end, that would be somewhere between 1 in 6 and 1 in 7 Americans.
— US News & World Report, 8/20/09

Why, instead of tailoring a bill to help that 40-46 million, did the whole health care system in the United States have to be changed to forcibly affect all? People who were perfectly happy with their coverage were forced to buy plans at a higher price, not to mention be facing unrealistic deductibles. Being able to purchase plans across state lines at more competitive prices was never considered in the Democrats’ ACA.

During the 2008 Democrat presidential primary, candidate Hillary Clinton pointed out that forcing parents to pick up the tab on their older children’s health care was an unreasonable burden. Parents paying for their children’s health care up to age 26 became a primary selling point. Too bad parents were never asked if this is something THEY even wanted to absorb.

Also during that debate, candidate Barack Obama also said it was unfair to “mandate” people buy government health care and it was even more unfair to fine them if they couldn’t afford it. Passage of the ACA meant people were mandated to buy health care if they wanted it or not and would be fined if they did not comply.

I will sign a universal health care bill into law by the end of my first term as president that will cover every American and cut the cost of a typical family’s premium by up to $2,500 a year.
— Senator Barack Obama, 2007 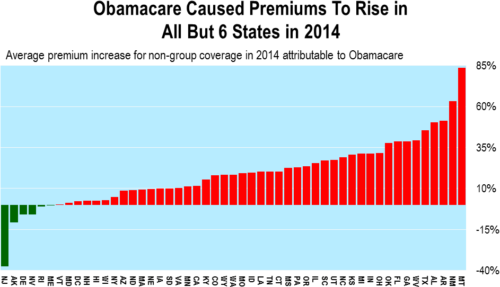 Deductibles rose to the point that people couldn’t afford to use the health care they were forced to buy.

Prior to passage of the ACA, employees enjoyed a 40-hour work week. After, some business employers reduced the hours their employees down to 29 so they didn’t have to pick up the tab for their employees at the inflated government cost. Businesses that had more than 50 employees were required to pay for their employees’ health care and that forced many employers to not expand their companies as some may have wanted.

Many Americans now have to work two or more jobs to make the equivalent of what they earned before passage of the ACA.

The elected in the House, Senate, Supreme Court, their staff and families exempted themselves from the very law they imposed on the rest of us.

And since passage up to now, Democrats are complaining that Republicans don’t have fixes for a law they rammed down the throats of the American people and are now poised to dismantle their flawed experiment; an experiment millions will celebrate once ended.

One of the many reasons Donald Trump was elected President was his promise to end the Democrat nightmare that was and still is the “Affordable Care Act”.

The People will soon see how much money they’ll be saving and just who made their lives miserable since 2010.