‘Indivisible’… or Organizing for Dummies

There are many smart people in the liberal political machine. However, that doesn’t appear to translate down to their base as evidenced by the tired-yet-still-overused “Hey hey, ho ho…” or “This is what democracy looks like!” chants, “Mic check” followed by an idiot with a megaphone telling a progressive mob what to shout in unison.

Liberals don’t like debating because it would require intellectually defending a position without name-calling as a stall tactic, and now that they’re totally out of power and the Trump administration is loosening the noose the left has put around American necks, all they have left is to take to the streets and disrupt wherever possible. The problem is liberals are so intellectually retarded, they even have to be told how to protest with a truly organic concept they had to copy. 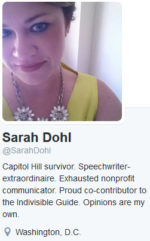 About 30 staffers from Congress and not-for-profit groups have created the Indivisible guide, which offers very specific advice for “resisting the Trump agenda”. “Unless you worked in congress the summer of 2009, you cannot fathom the volume of phone calls (that came in),” said Sarah Dohl, co-author, spokeswoman for the Indivisible guide and, between 2009 and 2013, a communications staffer for Lloyd Doggett, a Democratic Texas congressman.

Office phones would ring with Tea Party-aligned voters complaining from the moment staff arrived at the congressman’s office to well after they left, said Dohl. The office’s voicemail was always full.
— The Guardian (UK), 1/8/17

At least the Tea Party didn’t disrupt traffic in the streets and/or commit mass acts of vandalism of public and private property… ever. Unlike the left, conservative rallies leave their places of protest cleaner than when they first arrived, never took to the streets with signs saying Barack Obama wasn’t their president, but let’s not get into inconvenient weeds.

Anyway, if you have the time and patience, the following is a video followed by the audiobook of the Indivisible guide created for the reading-challenged amongst the anti-Trump, liberal base.

Like true leftists, they’re using deception to create narratives, busing in protesters, and creating general havoc all because Hillary didn’t know how to count to 270, and was apparently too arrogant and lazy to think she even needed to “fight” for that magic number.

If progressives have to rely on cringe-worthy chants from the 60’s because they’re truly originality-challenged, liberal Democrats will always be at least one step behind which is why they lost the House, the Senate, statehouses across the nation, now the presidency, and no matter how many times they stomp their feet in a collective hissyfit, reality will always be another thing.