Okay, let’s be fair; according to WMAL’s Chris Plante, all broadcast media but Fox News has aired the edited response then-Attorney General nominee Jeff Sessions gave to Minnesota Senator Al Franken during the confirmation hearings. Franken asked a question with regards to a universally discredited, #FakeNews story run by CNN….

Intel chiefs presented Trump with claims of Russian efforts to compromise him
Classified documents presented last week to President Obama and President-elect Trump included allegations that Russian operatives claim to have compromising personal and financial information about Mr. Trump, multiple US officials with direct knowledge of the briefings tell CNN.

The two-page synopsis also included allegations that there was a continuing exchange of information during the campaign between Trump surrogates and intermediaries for the Russian government, according to two national security officials.

Attorney General Sessions was clearly responding to Franken’s question about the CNN “story” and should have NEVER recused himself from any investigation of Russian hacking that supposedly denied Hillary Clinton her rightful place as President of the United States.

And as luck would have it, later in the day House Minority Leader Nancy Pelosi got caught telling a whopper herself….

The California Democrat told POLITICO Playbook on Friday morning that she had never met with the current Russian ambassador to the U.S., Sergey Kislyak. A file photo from Pelosi’s 2010 meeting with then-Russian President Dmitry Medvedev, however, shows Kislyak at the table across from her.
— Politico, 3/3/17 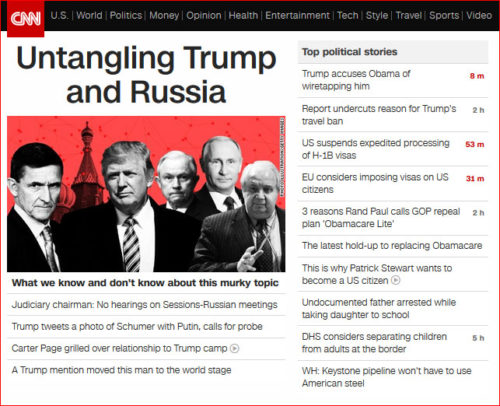 It’s going to be a long weekend.