Sessions’ DOJ: Why is #NeverTrump Isgur Flores in the Trump Admin?

Candidate-now-President Trump promised to “drain the swamp”. That being the case, what the hell is Sarah Isgur Flores doing anywhere near the Trump Administration? Isgur Flores appears to be the embodiment of the consultant leech class that chase any administration job-shiny pennies.

In 2009, she was the political director of Texans for Ted Cruz, Ted Cruz’s 2010 campaign for Texas State Attorney General.

In 2012, Isgur Flores advised Mitt Romney in his 2012 presidential campaign bid. She was in charge of the Romney campaign’s election day operations and provided legal consultation for the campaign.

From 2013 to 2014, Isgur Flores acted as deputy communications director for the Republican National Committee (RNC).

In May 2015, Sarah Isgur Flores transitioned from Carly Fiorina’s super PAC to her presidential campaign as deputy campaign manager.

After Fiorina dropped out of the presidential race, Isgur Flores spoke with MSNBC about the potential for a convention challenge to Donald Trump, saying, “I will certainly hope for a contested convention, and if not I hope that someone will offer an alternative.” According to the Daily Caller, Isgur Flores also said that her disapproval of Trump was based on her belief in conservatism: “For a lot of us, this isn’t about party. This isn’t about winning for the sake of winning for our team. This is about our country. And it’s about a belief system. And I’m a conservative before I’m a Republican.”

And now, Isgur Flores is “Director of Public Affairs at the Department of Justice” under Attorney General Jeff Sessions.

If loyalty is a prerequisite to a post in the Trump Administration, how did THIS happen? 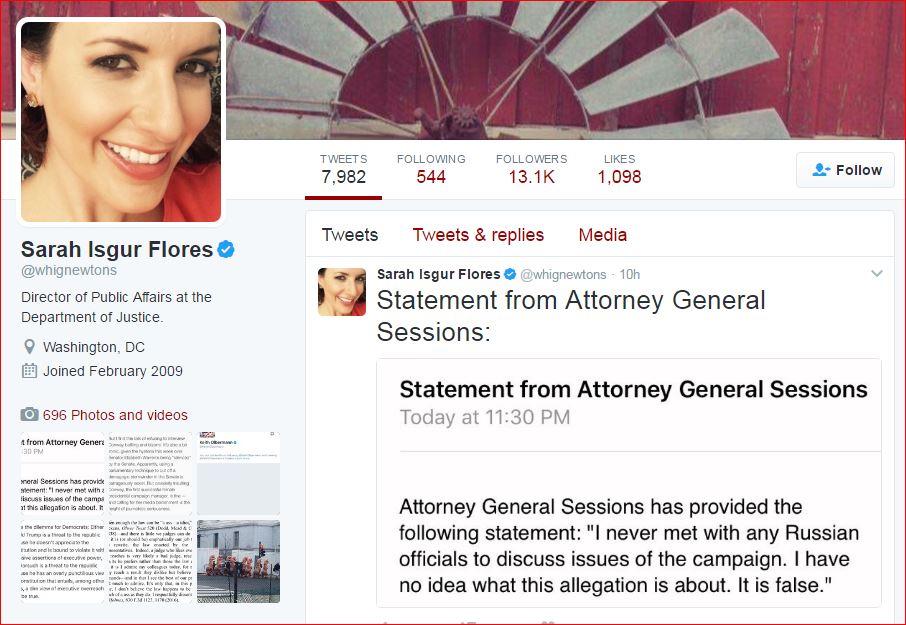 With all of the qualified, experienced people who have been the loyal conservative boots-on-the-ground to choose from, another political hack has moved up the ranks who proudly engaged in the #NeverTrump movement to steal candidate Trump’s delegates, spoke ill of the party’s presidential nominee and was ultimately rewarded with a cush job in the very administration of the man she publicly trashed.

We’ve always had issues with Reince Priebus being installed as President Trump’s chief of staff because many of the RNC fat-and-comfortable types would be absorbed into the administration and many of them were vocal adversaries of the Republican party nominee during the campaign.

And for some strange reason, Sarah Isgur Flores has appeared to have purged her Tweets prior to July 27, 2016, possibly so she could pass a background check to get into the Trump Administration. If her views were so “conservative” and “principled”, why aren’t they here for all to see anymore?

The president also needs to question Priebus’ contributions to his administration, especially those who’ve fought against his campaign and nomination who’ve been comfortable in the swamp that is now seeping into the White House.

Think about it: if for some reason Jeff Sessions were removed as AG, who would be next in line for consideration? Ted Cruz? Wouldn’t that be cozy!

Months after Jeff Sessions’ departure from the DOJ, Sarah decided it was time to ask for another job.

2/19/19: CNN hires GOP operative with no journalism experience to coordinate its 2020 coverage

Interesting how many “journalists” we currently have who were initially hired with no broadcast experience, but now standards must be observed. Given the liberal outrage, Sarah’s terms have been modified….

Like they say in sports, “Do what got you there.”