President Trump Was Right About Being ‘Taped’

This morning, President Donald Trump sent out a series of Tweets accusing the Obama Administration of tapping his communications during the 2016 presidential campaign.

While being dismissed because it can’t be confirmed nor denied, the media is claiming this is a Trump Administration attempt to deflect from the whole Attorney General Jeff Sessions debacle.

Without offering any evidence or providing the source of his information, Mr. Trump fired off a series of Twitter messages claiming that Mr. Obama “had my ‘wires tapped.’” He likened the supposed tapping to “Watergate/Nixon” and “McCarthyism.”

Ben Rhodes, a former top national security aide to Mr. Obama, said in a Twitter message directed at Mr. Trump on Saturday that “no president can order a wiretap” and added, “Those restrictions were put in place to protect citizens from people like you.”

Mr. Trump was said to be frustrated about the decision by Jeff Sessions, his attorney general, to recuse himself from participating in any investigations of connections between the Trump campaign and Russia. Mr. Trump has said there were no such connections.
— New York Times, 3/4/17

Okay, “no president can order a wiretap” but it stretches credibility that one month before a presidential election, such an action would be taken by an agency without the knowledge of the president and no career government employee would make such a call without it being discouraged from high up the chain.

What IS clear is President Trump is now privy to what’s been going on in the “swamp” and that appears to have made a lot of people on the Hill very nervous.

The media is not outright dismissing President Trump’s claim because it appears an attempt to obtain a FISA (Foreign Intelligence Surveillance Act of 1978) warrant to tap his campaign was attempted, at least two times.

Two separate sources with links to the counter-intelligence community have confirmed to Heat Street that the FBI sought, and was granted, a FISA court warrant in October, giving counter-intelligence permission to examine the activities of ‘U.S. persons’ in Donald Trump’s campaign with ties to Russia.

Contrary to earlier reporting in the New York Times, which cited FBI sources as saying that the agency did not believe that the private server in Donald Trump’s Trump Tower which was connected to a Russian bank had any nefarious purpose, the FBI’s counter-intelligence arm, sources say, re-drew an earlier FISA court request around possible financial and banking offenses related to the server. The first request, which, sources say, named Trump, was denied back in June, but the second was drawn more narrowly and was granted in October after evidence was presented of a server, possibly related to the Trump campaign, and its alleged links to two banks; SVB Bank and Russia’s Alfa Bank. While the Times story speaks of metadata, sources suggest that a FISA warrant was granted to look at the full content of emails and other related documents that may concern US persons.
— HeatStreet, 11/7/16

The carefully-worded response from the Obama camp is telling.

In a statement, Kevin Lewis, a spokesperson for Obama, rejected Trump’s assertion.

The FBI is NOT a “White House official” and President Obama didn’t have to order surveillance; just be aware and nix the whole thing if he saw it unnecessary.

Chances are, IF such a warrant WAS granted, if there was any nefarious activity gathered we would have heard about it by now. As President Trump has access to much more information than he did as a private citizen, he must have been told and was waiting for the best possible opportunity to send the disruptors loyal to Barack Obama a very clear message.

Let’s hope we don’t soon find that the FISA logs from 2016 have suddenly disappeared or have been deemed “classified”.

t looks like President Trump’s tree-shaking is worrying some in Obama’s inner circle. 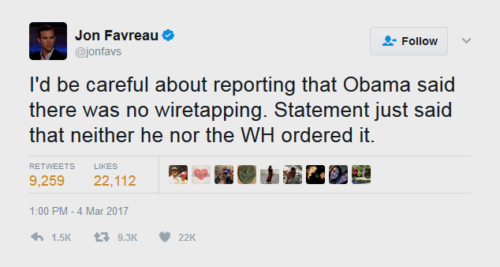 Former Director of Intelligence James Clapper has left a window open of “plausible deniability”, former Attorney General Loretta Lynch has been commenting on other things while both Lt. Col. Tony Schaffer and Mark Levin have verified our speculation that Obama HAD to have been briefed on the wiretaps.

Things must be getting a bit thick amongst those within Obama’s tight circle.

What’s laughable is the media’s unison response with the former administration that there’s “no evidence” that President Barack Obama had any knowledge of a Donald Trump wiretap while spending the last few months declaring Russian influence in the presidential election while many in the know have repeatedly said there’s “no evidence” such ever happened.