We’ve always said that certain premium causes of the left (gay rights, abortion) were also meant to be taken as a middle finger to the church.

Feminists in Portugal took that middle finger to the next “performance art” level on “International Women’s Day”. 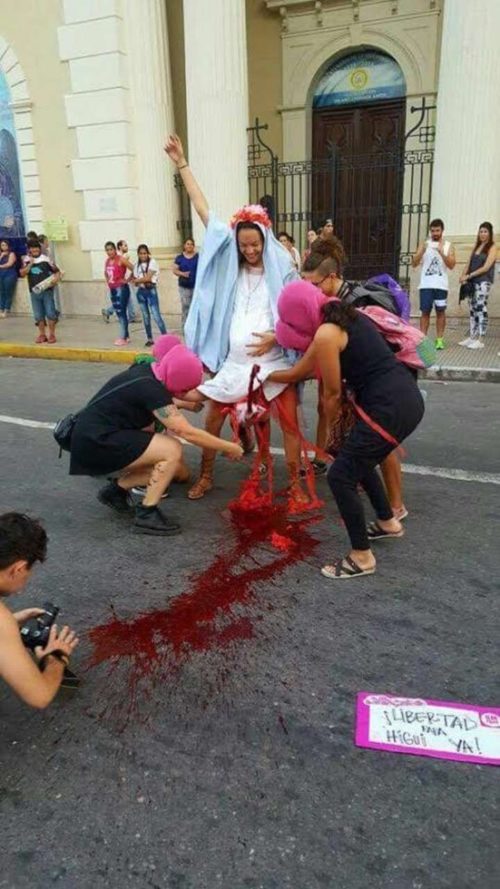 Feminists to stage “abortion of Jesus” in front of the Catholic Church
“Protest” would be against patriarchy, compulsory heterosexuality and “the impositions of the repressive society”

The archbishop of Tucumán (Argentina), Alfredo Horacio Zecca, repudiated the staging of an “abortion” of the virgin Mary during the March 8 feminist march, Women’s Day.

In a communiqué published on September 09, the archbishop said that “we repudiate with deep sadness the unfortunate events that took place yesterday, March 8, in the afternoon, in front of the Cathedral of Tucumán that profoundly denigrate the person and image of the Blessed Virgin Mary, The faith of Catholics. “

Due to the commemoration of Women’s Day, a group of feminists held a demonstration on the main streets of the city. Some of the demonstrators staged the abortion of the Virgin Mary, with a lot of red paint, simulating a bleeding, in front of the Cathedral of Tucumán.

On Facebook, the feminist group Socorro Rosa Tucumán staged the image, assuring that “the virgin aborted in the cathedral the patriarchy, the obligatory heterosexuality and the impositions of the repressive society and demanded to all the misogynists of this medieval province to take the images of the maternities, that Do not forbid further abortions on their behalf. “

According to Aciprensa, feminists also referred to the “violating system (sic) that forces forced labor.”

The archbishop noted that “the facts are only aggressive offenses to all the faithful, and also an offense to the dignity of women.”

Zecca also recalled that March is “the month of reflection on the rights of children born,” and invited all Catholics and the community at large for the March for Life and the Family, on the 25th, at 6 o’clock.
— GospelPrime (translated), 3/10/17

While progressives whine about all things they deem offensive, they tend to be (in the name of “awareness”) the most offensive, intolerant human beings on the planet.

But what else is new?