Not excusing what he said at all, but “girlfriend” Vanessa Stiviano was clearly keeping the conversation going while she knowingly recorded it for future use.

I wonder what could have set this off…? 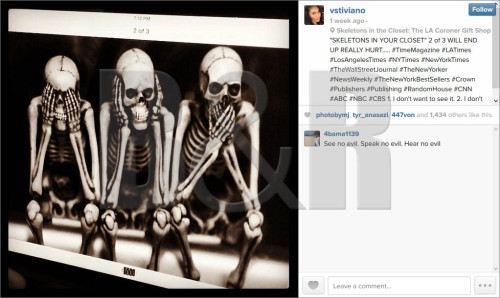 Just speculating here, but it sounds like a young woman who needed some move-on money and look who she hashtagged…

And suspiciously, both V. and an acquaintance she mentioned have put their Instagram accounts on “private”. 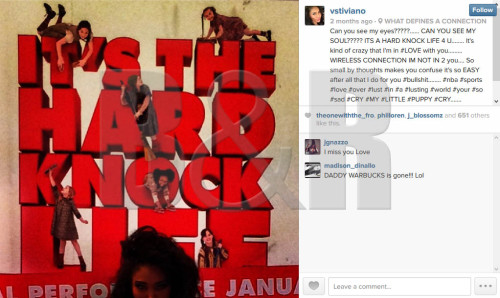 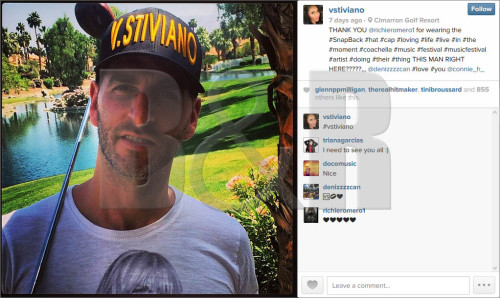 And as the loony left is trying to tie Donald Sterling to the Republican Party in the Twitterverse, know he’s donated just $6,000, with no activity since the early 2000s. Sterling supported Gray Davis (D) as well as Bill Bradley (D), and since when would the NAACP take money from someone in the GOP? 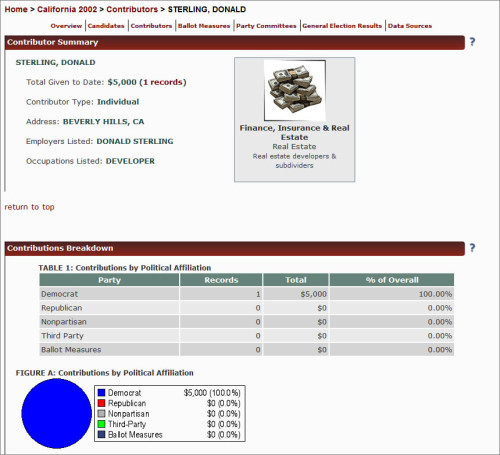 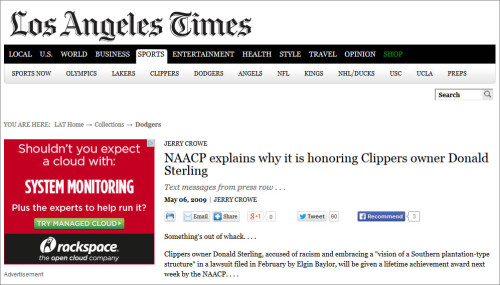 V. Stiviano is clearly a product of our fame-for-no-reason culture and using “looks” to get rich is a tried-and-true tradition in Hollywood. She will probably have a very hard time finding a rich man now, then again considering her skimpy attire, it’ll be easy to see if she’s wearing a wire.

As for Donald Sterling, stay away from loose women and black people. All these former players and rap artists Tweeting their outrage: I’d love to hear what we’d come up with if we could secretly tape a bunch of black liberals in a room and savor the racism! 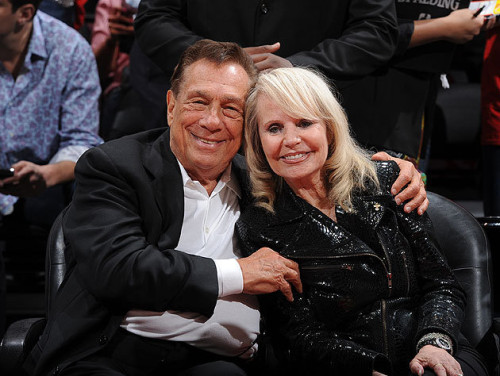 Wife Of Clippers Owner Sues Woman She Alleges Had Affair With Her Husband
Sounds like Vanessa Stiviano needs a $1.8 million cash infusion, quick.

We do know that the woman on the tape — who we believe released it to TMZ — is the defendant in a lawsuit brought by the Sterling family, alleging that she embezzled more than $1.8 million, who told Mr. Sterling that she would “get even”.
— Statement from Donald T. Sterling and the Clippers organization to TMZ Sports 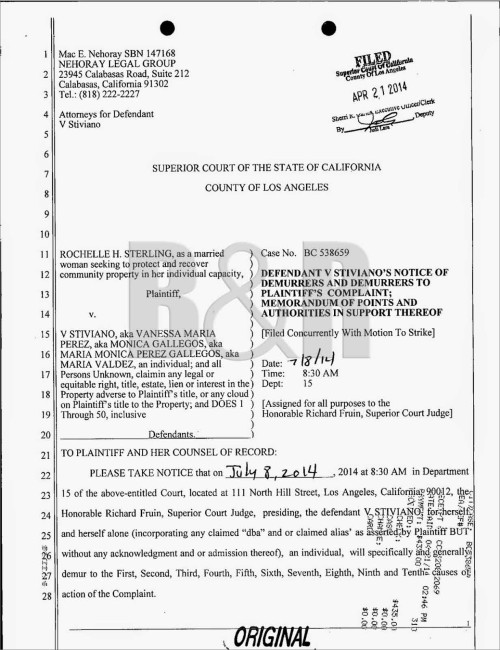 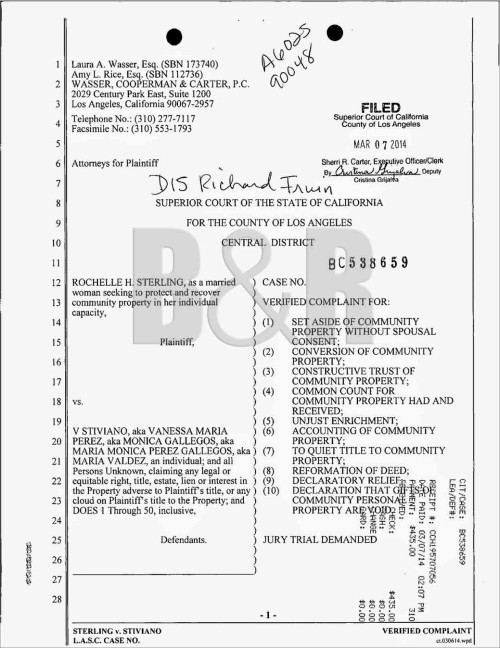 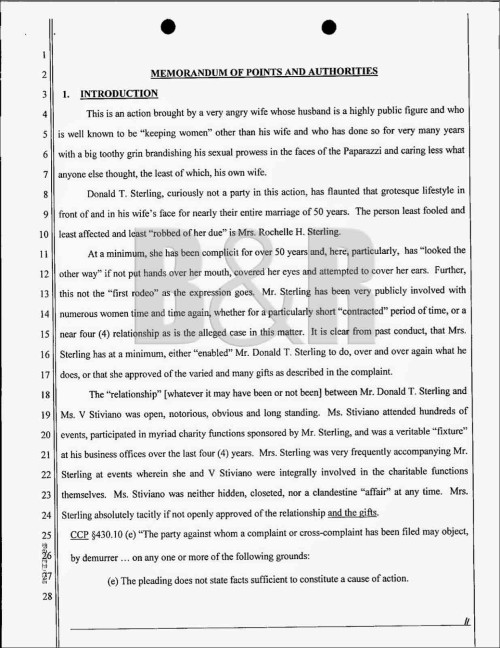 Could THIS be why the conservation was recorded and released to TMZ and how long before we see Gloria Allred out front on this? 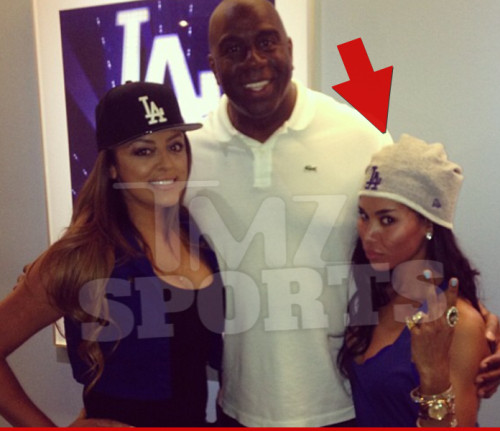 If you listen to parts of the deceptively-recorded audio of Vanessa Stiviano and Donald Sterling, he’s clearly concerned about the pic she posted with Magic Johnson, NOT because he’s black, but because of the “call” he’d get from the “culture” that has problems with blacks.

I think it would be a given to ask Sterling WHO calls him and voices their Beverly Hills-Bel Air-Hollywood snobbish opinions about black people.

Of course, that’s NOT where the media will go because it could be very embarrassing to the Hollywood left for us to know just what they really think about blacks, especially those now piling on in group-outrage.

Have you noticed how many irrelevant “celebrities” have come out of the woodwork to issue their worthless opinions on the Donald Sterling race soap? And some of these people are in no position to come down on the words or deeds of others.

Spike Lee Slams Donald Sterling: ‘The Mentality of a Slave Master’
Flashback 2002: “I give interracial couples a look. Daggers. They get uncomfortable when they see me on the street.”
Flashback 2014: On white people, “I mean, they just move in the neighborhood. You just can’t come in the neighborhood. You can’t just come in when people have a culture that’s been laid down for generations and you come in and now shit gotta change because you’re here? Get the fuck outta here.”

NBPA’s Kevin Johnson calls for indefinite suspension, maximum fine for Donald Sterling
Flashback 2009: IG-Gate: ‘Hush Money’ Charge in Sacramento Mayor’s Sex Scandal Was Part of Probe
When Kevin Johnson, the former NBA star who is now mayor of Sacramento, was under investigation last year for alleged financial misdeeds and inappropriate behavior with female students, he had an important ally behind the scenes.Michelle Rhee, the nationally known education reformer who is now head of the Washington, D.C., public schools, had several conversations with a federal inspector general in which she made the case for Johnson and the school he ran in Sacramento, according to the inspector general. Rhee, who had served on the board of the school and is now engaged to marry Johnson, said he was “a good guy.”
Charles Barkley calls for Donald Sterling to be suspended immediately
Flashback 2013: Charles Barkley: The media loves racism
Sir Charles sure knows liberals. Then again, he was quoted as saying, “This is why I hate white people. You guys try to turn everything into a racial issue.”

Snoop Dogg Posts Profanity-Laced Message to Donald Sterling on Instagram
Flashback 2003: Snoop’s ‘Girls Gone Wild’ Go to Court
The hip-hop star (real name: Calvin Broadus), 31, allegedly offered a 17-year-old girl and her 18-year-old friend marijuana and Ecstasy to bare all for his camera during Mardi Gras in New Orleans last February, says Bay County, Fla., sheriff’s investigator Faith Bell.Regarding his decision to release his own “Girls Gone Wild” tape, Snoop told Newsweek: “Somebody gotta make (porn videos). … You can’t blame a Negro for getting paid, can you?” He has also said that he hopes to expand the genre’s appeal so that “Girls Gone Wild” will include more women of color.“If you notice, there hasn’t been no girls of (ethnicity) at all on none of those tapes,” he told the Associated Press. “No black girls, no Spanish girls … all white girls, and that ain’t cool, because white girls ain’t the only hos that get wild.” 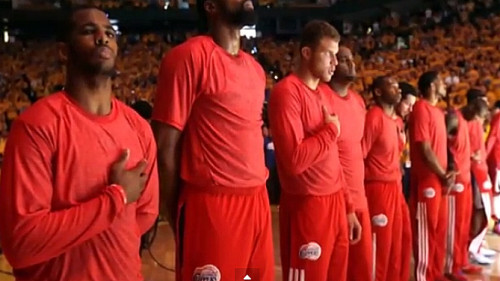 Focus, Clippers (they lost that playoff game). Donald Sterling pays them and pays them well. Maybe more than they deserve because we all know professional athletes are model citizens….

Donald Sterling has a higher percentage of employees who run afoul of the law, probably only second to the mob or your local city hall.

Cuban not in favor of booting Sterling

After all, it’s not fair to lose an investment because of something that happened in the privacy of their home. Cuban cited the “slippery slope” for a reason.

The list is out there and it’s clear when racism is involved, attention seekers start throwing rocks from their glass balconies. Not a good idea.

This is about Donald Sterling, Vanessa Stiviano and the Los Angeles Clippers; not the Los Angeles Branch of the NAACP and a “black whore”. They SHOULD know the difference….