The left doesn’t think much of the church so this won’t make headlines they’re able to access, but what many of us have been saying has been dismissed as “conspiracy theory” which is convenient for those who are critical thinking-challenged. What’s sad are those who’ll do everything to keep from pissing them off even though they’ll be targeted again at the next possible opportunity.

As Italy was one of the world’s hardest-hit Coronavirus hotspots, The Vatican attempted to capitalize on their immediate influence.

Pope Francis created a new commission that will confront the challenges the world is facing in battling the coronavirus pandemic and what it will inevitably face in its aftermath, the Vatican announced.
— National Catholic Reporter, 4/15/20

It didn’t appear to have created unity within; factions have emerged.

Catholic bishops have distanced themselves from a letter in which several prominent Catholic clergy warned there were attempts to use the COVID-19 pandemic to create a “world government beyond all control.” The German bishops had called the restrictions — including those affecting church services — “reasonable and responsible” and emphasized that they should be relaxed “responsibly and in a measured way,” Germany’s Catholic news agency KNA reported.
— Catholic News Service, 5/11/20

See if this sounds familiar….

The vicar general of the Essen Diocese, Msgr. Klaus Pfeffer, was the first church official to respond to the appeal, saying he was “simply stunned at what is being disseminated in the name of the church and Christendom: crude conspiracy theories without facts or evidence combined with a right-wing populist combative rhetoric that sounds frightening.” Jesus Christ has nothing to do with such confused theories that stirred up fear and hostility and poisoned society, he said.

So, what could “several prominent Catholic clergy” say that would incur the wrath of the anonymous intolerant? 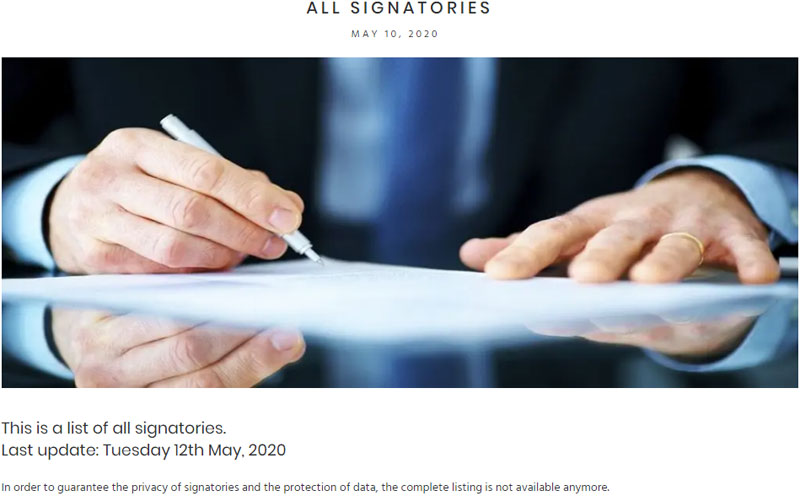 How about the equivalent of an “appeal”, not written by someone shutdown in Michigan or Chicago or Los Angeles, but at The Vatican….

The facts have shown that, under the pretext of the Covid-19 epidemic, the inalienable rights of citizens have in many cases been violated and their fundamental freedoms, including the exercise of freedom of worship, expression and movement, have been disproportionately and unjustifiably restricted. Public health must not, and cannot, become an alibi for infringing on the rights of millions of people around the world, let alone for depriving the civil authority of its duty to act wisely for the common good. This is particularly true as growing doubts emerge from several quarters about the actual contagiousness, danger and resistance of the virus. Many authoritative voices in the world of science and medicine confirm that the media’s alarmism about Covid-19 appears to be absolutely unjustified.
— APPEAL FOR THE CHURCH AND THE WORLD to Catholics and all people of good will

Don’t tell that to Brian Stelter.

We have reason to believe, on the basis of official data on the incidence of the epidemic as related to the number of deaths, that there are powers interested in creating panic among the world’s population with the sole aim of permanently imposing unacceptable forms of restriction on freedoms, of controlling people and of tracking their movements. The imposition of these illiberal measures is a disturbing prelude to the realization of a world government beyond all control.

You can imagine what social and the professional media would screech had these words come from President Trump.

We ask the scientific community to be vigilant, so that cures for Covid-19 are offered in honesty for the common good. Every effort must be made to ensure that shady business interests do not influence the choices made by government leaders and international bodies. It is unreasonable to penalize those remedies that have proved to be effective, and are often inexpensive, just because one wishes to give priority to treatments or vaccines that are not as good, but which guarantee pharmaceutical companies far greater profits, and exacerbate public health expenditures.

It’s obvious the Cardinals are referring to that dreaded Hydroxychloroquine.

Let us also remember, as Pastors, that for Catholics it is morally unacceptable to develop or use vaccines derived from material from aborted fetuses.

How many people have even considered just what may be in some of these proposed “vaccines”?

We also ask government leaders to ensure that forms of control over people, whether through tracking systems or any other form of location-finding, are rigorously avoided. The fight against Covid-19, however serious, must not be the pretext for supporting the hidden intentions of supranational bodies that have very strong commercial and political interests in this plan. In particular, citizens must be given the opportunity to refuse these restrictions on personal freedom, without any penalty whatsoever being imposed on those who do not wish to use vaccines, contact tracking or any other similar tool.

Let us also consider the blatant contradiction of those who pursue policies of drastic population control and at the same time present themselves as the savior of humanity, without any political or social legitimacy.

We sure have a lot of those.

Finally, the political responsibility of those who represent the people can in no way be left to “experts” who can indeed claim a kind of immunity from prosecution, which is disturbing to say the least.

We strongly urge those in the media to commit themselves to providing accurate information and not penalizing dissent by resorting to forms of censorship, as is happening widely on social media, in the press and on television. Providing accurate information requires that room be given to voices that are not aligned with a single way of thinking. This allows citizens to consciously assess the facts, without being heavily influenced by partisan interventions. A democratic and honest debate is the best antidote to the risk of imposing subtle forms of dictatorship, presumably worse than those our society has seen rise and fall in the recent past.

In the United States, “democratic” and “honest” are antitheses.

Can anyone honestly say when we’ve been able to get any kind of “accurate information” from the media? And if information shared isn’t certified by the media, one can have social media accounts muted or removed simply because he or she veered from the approved narrative.

Of course, the issuance of the “appeal” was met with the expected hysterics and ground had to be (and was) stood.

I do not understand the text as meaning that Corona was invented to cause panic, but that the measures against it are strictly related to the disease, but that political and economic interests must not be mixed up with it. In any case, the threat to publicly vaccinate seven billion people, even if the medication has not yet been adequately tested, and to withdraw basic rights from them, has been made publicly. Nobody can be forced to believe that few “philanthropic” super billionaires have the best programs to improve the world just because they have managed to accumulate huge private wealth.
— Cardinal Gerhard Müller, 5/14/20

It’s not often we see what may be a fracture within the walls of Vatican City, but these are unusual times and a time where voices of reason are out there.

It’s just a question if they are allowed to speak and how severe the ramifications may be.