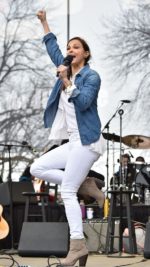 In the safety of the large number of like-minded, pussy-hatted women at the “march” held on the Washington Mall, actress Ashley Judd came off as fairly deranged, delivering an over-acted rendition of a rhyme-challenged poem written by a 19-year-old “nasty woman”, directed at the evil, misogynist President Trump and the racist United States of America that elected him.

It now comes with a sense of irony that the same Ashley Judd was approached and subjected to a very muted example of what Trump supporters and Republicans receive from those on her side of the aisle and it left her… “scared”.

I’d like to share with you and experience I had today. It’s uncomfortable and scary for me and I have a hunch that some of you have had experiences like it. It may be attempting to put me in a different position as a so called public person, and the reminder is, like all of us, I’m just human and navigating this at times terrifyingly polarized post election climate.

An older man with white hair came up to me at my seat today at a basketball game. He said “May I take your picture? I said “Yes.” And before I could offer for him to be in the picture with me, 6 inches from my face, he took my picture with his phone. He said “I’m from Big Stone gap.” I said, “I love Big Stone Gap! What a beautiful town, I loved making the movie there.” I went on to say how good the cooking is, mentioning, of course, the pineapple upside down cake and pumpkin pie!

In my mind I was getting ready to ask him about the national parks and if he ever spends time in especially the Thomas Jefferson National Park – but something inside of me was already clenching and I concluded by simply saying “I like Big Stone Gap. “

He said to me with open hostility as he was backing away, “We like Trump.”

Of course, it’s very clear now that as I was being friendly and talking, his affect was angry, and he certainly didn’t respond in anyway to my general enthusing about his little Appalachian town. And it’s also clear that his entire approach to me and aggressive sticking his phone 6 inches in front of my face to take my picture was a part of his plan to treat me with rudeness, aggression, and disrespect. Who knows, maybe he’s already done something undignified with the picture or maybe it was just a pretense so he could say something menacing to me.

I feel very sad that this happened, and frankly scared. We absolutely need apolitical spaces in this country where we come together for something that is beyond who voted for whom and the platforms, beliefs, and agendas of respective candidates.
— Ashley Judd, Facebook post, 3/11/17

So, liberals can intentionally stop traffic, get in people’s faces with cellphones mere inches from Trump supporters’ faces, destroy public and private property, all in the name of resisting President Trump, hiding behind the 1st Amendment guarantee of freedom of speech and assembly.

Yet when someone gets in her face with a “menacing” cellphone without physical contact, Ashley Judd recoils into a pile of self-pitying mush longing for a safe space she can retreat to as she has to endure being anywhere close to people who have the audacity to not share the same belief system as her.