School Meals ‘Cuts’: If You Breed, Feed Your Own Damn Kids!

After the March announcement of President Trump’s budget plan, the expected wail on the left started with a crescendo. 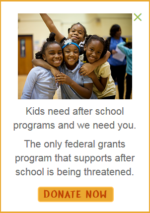 Wings for Kids and thousands of programs like it are on the chopping block, threatened by President Trump’s proposal to eliminate $1.2 billion in grants for after-school and summer programs.

“It’s heart-wrenching,” said Bridget Laird, chief executive of Wings for Kids, which serves 1,600 children in Atlanta; Charlotte; Charleston, S.C.; and rural Lake City, S.C. She said Thursday that without federal aid, those programs would be eliminated or gutted. “I can’t imagine if that were turned off — all of those kids running around the streets.”

BTW — Bridget Laird was paid $180,617 in FY18 salary and “other compensation from the organization and related organizations”. Bridget won’t miss a meal.

First off, a grant is a gift. It’s not an entitlement, it’s not something mandated to be issued by law. It’s a monetary allotment that’s applied for and approved/disapproved based on the merits of the recipient proposal, and certainly shouldn’t be depended on.

Second, we see the involvement of the liberal, career mill nonprofit cabals who compensate themselves very well while exploiting the poor at any given opportunity.

What do we mean by “exploit”…?

Look who WTSP in Tampa decided to present to the public as victims to prove their case that without the school meals program, poor children starve and it will be President Trump’s fault.

Reporter Shannon Valladolid sought out the most pitiful optics she deemed indicative of the poor that would be impacted most by the “cuts” to school meals for children. She apparently sought out one neighborhood and featured poor blacks (and not poor Latinos), which incidentally is a commonly used exploitation tactic by the liberal nonprofit industry.

Besides losing the programs, another big issue is food. Many times, these programs provide snacks and full meals. For many, it’s their only means for food.
— Shannon Valladolid, WTSP, 3/21/17

Sorry to sound cold-blooded but, whose fault is that?

Many of us grew up either before or during the nationwide implementation of the school lunch program (that predictably morphed into a year-round entitlement).

Many of our parents weren’t rich, but it was their responsibility that their children went to school with a paper bag or lunchbox that had a sandwich, chips, and a thermos with either soup or SpaghettiOs® with Meatballs. Many of us who were latchkey kids didn’t have after-school programs to go to, yet knew we were to go straight home until a parent arrived. It was the responsibility of our parents to make sure we weren’t going hungry.

“Here in Pinellas, we do have a hunger issue among our kids,” says Lynn Geist, director with the food service department for Pinellas county schools. That hunger issue was so severe in 2013, the county added a dinner program.

Sure, today is a different time and parents have lots more important things to spend their money on than feeding their own children and they expect the American people to pay for the three squares, thus absolve themselves of any responsibility. It’s not like the poor don’t get financial assistance per each kid they pump out, and it’s not like the Women, Infants, and Children (WIC) program never existed, but we’ve sure heard how that and the food stamp program has been used and very much abused. The poor ARE subsided to feed their children. If they’re not being fed, how much of that becomes the problem of the government instead of asking where that assistance is going?

The Trump administration’s call for zero funding for the 21st Century Community Learning Centers (21st CCLC) afterschool initiative is a betrayal of the millions of students and parents who depend on afterschool and summer learning programs. This proposal would devastate working families. It is painfully short-sighted and makes a mockery of the President’s promise to make our country safer and to support inner cities and rural communities alike.
— Jodi Grant, executive director of Afterschool Alliance

Of course, the nonprofits will NEVER remind a parent whose responsibility it is to feed, clothe, and house a child. That would be insensitive, maybe even racist. Instead, create programs that employ more liberals and encourage more parents to absolve themselves of responsibility.

Who knows, maybe President Trump is just imposing some tough love on irresponsible parents whose priorities need a reality check. Just don’t depend on any dignity coming from the media and nonprofit career mill. They expect even less from those they consider beneath them.