In a previous post with regards to the Corey Stewart for Virginia governor campaign, we said this race is his to lose. We used those words for a reason.

Let’s begin here: we know, respect and like Corey as a person and politically, his accomplishments are laudable. We’re also aware of those running his campaign and aside from their previous alliances with the very Ted Cruz campaign that Stewart fought against during the presidential campaign where they stole Trump delegates, the campaign’s direction is confounding at best.

For the last few weeks, Stewart’s campaign has wrapped him in this cause to save Confederate monuments of historical importance.

Republican candidate for governor Corey Stewart spoke at the Old South Ball in Danville on Saturday night, surrounded by more Confederate flags than you could shake a saber at. With one massive flag hanging above him, and apparently in period clothing, the hyperbolic chairman of the Prince William County Board of Supervisors promised to protect Confederate monuments in the state with his life.
— Daily Press, 4/9/17

Robert E. Lee and Stonewall Jackson’s views on slavery was somewhere best not to go, let alone defend in a campaign setting.

The blacks are immeasurably better off here than in Africa, morally, socially and physically. The painful discipline they are undergoing, is necessary for their instruction as a race, and I hope will prepare and lead them to better things. How long their subjugation may be necessary is known and ordered by a wise Merciful Providence.
— Robert E. Lee, to Mary Anna Lee, December 27, 1856

Jackson neither apologized for nor spoke in favor of the practice of slavery. He probably opposed the institution. Yet in his mind the Creator had sanctioned slavery, and man had no moral right to challenge its existence.
— James I. Robertson, Jr., Alumni Distinguished Professor in History, Virginia Tech

And of course when the predictable blowback came from the left and their media, the campaign uploads and shares their signature, amateurish (for what should be a multi-million dollar campaign with national implications), shaky vertical video in the wimpish attempt to make a strong candidate look like a victim of liberal bullies: a victim of multiple campaign-inflicted wounds.

Republican gubernatorial candidate Corey Stewart came to this town to defend its statue of Robert E. Lee in a downtown park, only to be swarmed by dozens of protesters who shouted him down everywhere he went. It was the harshest reception yet for the provocative chairman of the Prince William Board of County Supervisors, who is campaigning for the GOP nomination for governor as Virginia’s Donald Trump, with a hard-line stance against illegal immigration.
— Washington Post, 2/11/17

Gubernatorial candidate Corey Stewart came to denounce City Council’s decision to remove the statue of General Robert E. Lee, bringing with him Thaddeus Dionne Alexander, who became a social media sensation for telling Hillary Clinton supporters to “stop being crybabies.” Stewart was met by protesters shouting, “Hey hey, ho ho, white supremacy’s got to go,” and his campaign described them as “an aggressive mob of liberal protesters.”
— C-Ville, 2/15/17

The problem with a campaign run by millennials is that while they may have ready access to Wikipedia and can look something up when a topic arises, they generally have no frame of reference for anything that happened prior to their existence on the planet.

Had ONE of them spent five minutes on The Dixiecrat Myth, they’d know that Confederate history IS Democrat history. Stewart’s current mission of “stopping historical vandalism” is something best left to people who actually were born in Virginia and may have had relatives who were on either side during the Civil War.

As Corey Stewart is from Duluth, Minnesota, what dog does he have in this fight?

“They’re blaming this Confederate flag issue, but they’re not following this race very carefully,” Stewart said in a telephone interview with the Times Sunday.

“Because this is not about the Confederate flag,” Stewart continued. “It’s about out-of-control political correctness that shames people for celebrating their ancestry and their heritage.”
— Prince William Times, 4/23/17 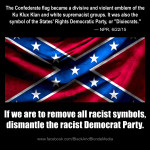 Granted, Civil War history/heritage is American history/heritage but in making these statements, he’s failed to remind Virginians that the Confederate flag was also THE symbol of the Democrat Party, thus purging the Commonwealth of these symbols is the ongoing liberal whitewash of their murderous legacy of slavery, Jim Crow, their Klan, lynchings, voting rights suppression; the list goes on.

Is that Stewart’s fault? Maybe. Is it his campaign’s fault for not providing him the necessary political context? Definitely.

In a gubernatorial campaign with national implications, ignorance is no excuse and the optical results of this political incompetence is glaring. Democrats salivate at the opportunity to Photoshop a Republican with a Confederate flag. Stewart’s campaign has given them many freebies. 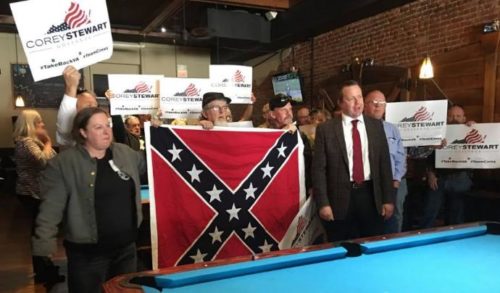 In politics, optics are everything. Who in a sane campaign would allow such ammunition to be stockpiled in the first place? People have been fired from high-profile campaigns for far less.

Every Republican in the nation who runs for anything knows at some point the Democrats will call that Republican a racist, yet Stewart’s campaign appears to have stupidly invited and embraced the label for their candidate. And the bleeding has become a gush.

A group of four Prince William County Supervisors, along with the County Sheriff, are endorsing Ed Gillespie in the race to become the Republican candidate in Virginia’s gubernatorial race. They’ve chosen Gillespie over their own colleague on the Board of Supervisors, Chairman Corey Stewart.

We’re not the ones making a big deal over the debacle that has visually overtaken Stewart’s campaign. We’re not the ones who told Corey this is a winning issue even though we can’t remember ONE Republican who’s ever won an election embracing the Confederate flag. While we all know he isn’t a white supremacist racist, Stewart’s campaign has given Democrats and establishment Republicans a massive club to beat the candidate who has beaten Democrats easily in the past, which is exactly why this gift was so politically unnecessary. 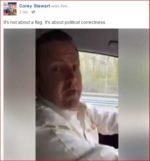 What a whining little b**** this guy is. Just remember a few things as you watch this pathetic video by Corey Stewart: 1) this is the same guy, born and raised in Minnesota by the way, who’s been waging a neo-Confederate campaign, who just a couple weeks ago proclaimed his pride for the Confederate flag at the “Old South Ball” in Danville, Virginia, and who is now claiming it’s “not about the Confederate flag” after all; 2) Corey’s getting his butt kicked by all metrics – polls, fundraising, straw polls, you name it – by Ed Gillespie; and 3) most recently, Corey was rejected by four of his fellow Republican Prince William County Supervisors, plus Prince William County’s Sheriff, all of whom endorsed Ed Gillespie for Governor over him. So now, it’s all about the “far left” and a war on Virginia’s “identity” and the “bondage” of “political correctness,” which he vows to “stomp out” and “destroy” because it’s “not something that belongs in a free society.” Yeah, the guy’s a Virginia Republican all right…
— Blue Virginia, 4/23/17

With all of his accomplishments, the CONFEDERATE FLAG is the last thing that Corey Stewart should be talking about in the race for the governorship of Virginia. This topic should have been avoided when it came up and left to the locals to hammer out. Despite all the pics taken of Stewart lately with the flag and locals, did anyone think about how those visceral optics would appear to black people, especially the senior-most elected black Republican in the Commonwealth?

Today, I am pulling my endorsement of Corey Stewart for Governor. He is a friend but his campaign has become more focused on division, rather than the unifying values and the history of the Republican Party. I now support Ed Gillespie to be our next Governor.
— Prince William Sheriff Glenn Hill

Stewart has significantly reduced the number of criminal illegal aliens without the Confederate Flag. Stewart has reduced taxes as At-Large Chairman of the Board of Supervisors of Prince William County without the Confederate flag, but what are his enemies (Democrat and Republican) talking about? The symbol of Democrat racism he appears to have embraced, at least in the all-important optics.

And let’s just say, for shits and giggles, that Corey Stewart wins the primary. Do you think the media: local, state, and national will be talking about his record and/or his positions? It will be about the optics of a Republican and the Confederate flag. We’ll be reminded of Dylann Roof going into a church, gunning down nine black people, and a pic of him next to… the Confederate flag. And if you think the Democrats won’t use these optics against Corey Stewart, you’re naive.

How he recovers with an indefensible campaign position is unclear, but this is still his campaign to lose. Both sides are trying to take him out.

Corey Stewart and his campaign shouldn’t be helping them.

And Gillespie eventually lost to Northam giving us another Democrat governor.

Sadly, some of us could see this coming. Stewart’s paid campaign staff did not and many have comfortably moved on to infect other Virginia campaigns. But, what else is new?