The Trump Budget and the Politics: ‘Cuts’ For Dummies

What’s sad is that the Democrat hysterics happen every two years, the media repeats it, people freak, and the unimaginable never happens.

President Trump has unveiled his proposed budget and the Democrats are repeating the c-word….

And let’s never forget the inevitable use of the d-word.

Yes, we’ve heard it all before.

Speaking of political repetition, it’s sad I’m still having to explain what I said over 12 years ago. So seeing how the left and their media still assume the American people are a bunch of stoopids who’ll buy their bullshit, as a public service, we proudly present… 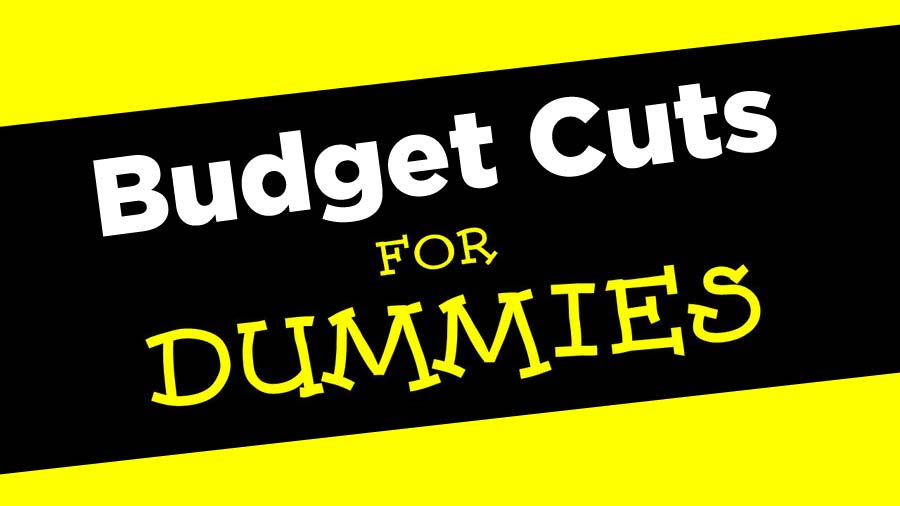 As you consume the Democrat messaging (echoed by the media) on how devastating President Trump’s budget “cuts” will be, especially to the poor, women, minorities, the elderly, let’s remind you what a political budget “cut” normally is.

After looking at my personal budget, I determined I couldn’t afford to give you $10 so instead I would give you $7.

Democrats would say I was cutting what I was supposed to give you by 30%.

Many of the departments whose budgets are being cut (if you’ll be intellectually honest) haven’t been respectful stewards of the hard-earned taxpayer dollar. We’ve seen and heard of many instances of waste, if not outright theft, by government employees, callous damage caused by government agencies, and rarely are there any ramifications as there would be if we did the same thing at a private company.

Let’s look at some of these affected government agencies like one of those supposedly, altruistic nonprofits.

Many of them have intentionally vague missions. Some want to help veterans, feed children, help the poor, save the environment, fund the arts, clean the oceans, etc. Unfortunately, like nonprofits, if the mission were to ever be achieved, employees would be out of a job, thus the vague mission statements.

As argued in a previous post, exactly why are taxpayers feeding school children three meals a day, and in some cases 260 weekdays a year? Where are the parents? Why did our parents deem it their responsibility to make sure we had a lunchbox complete with sandwich, chips, and a Thermos full of either soup or SpaghettiOs® with Meatballs while many parents today deem it our responsibility to feed their many children so more valuable resources go to their cellphone plans and whatever else considered more important?

We won’t even get into Michelle Obama’s school lunch reboot that resulted in a need to increase the trash budgets.

As witnessed by the miraculous restoration of a beach in one week’s time, the whole notion that the planet cannot “heal” itself without governmental environment agencies or nonprofit activists has been near rendered laughable.

Back in 2007, I shared a piece from the National Geographic that showed evidence that the polar ice caps on Mars were melting. Seeing how Mars is further away from the Sun than the planet Earth and there are no SUV’s or factories there, only the warming of the Sun could explain warming that occurs because of our proximity to that bright, gaseous ball. The sheer fact NOT ONE environmental group EVER attributed global warming and cooling fluctuation to the variation in Sun activity but knee-jerk blamed human activity as the primary source should give pause for a red scam flag.

The Environmental Protection Agency has committed gross indifferent negligence and/or malfeasance over the years while there’s been very little benefit to be shown as a return on investment. The Gold King Mine spill, committed by the reckless EPA polluted a river through four states and negatively affected the livelihood of millions of people, yet no one was really held accountable. Let’s not even talk about who was really negligent and thus ultimately responsible for the lead in the Flint, Michigan drinking water.

But government employees in some of these agencies had enough time to organize a march of defiance, much of it done on the taxpayer dime.

Veterans are still not receiving the benefits they rightfully deserve, the poor have not been given the guidance and tutelage necessary to rise out of poverty (aside from how to apply for “benefits”), “art” has become a scam to subsidize no-talent rich kids with taxpayer dollars so their shit (no one wants to buy) can be intellectualized by humanities academics for validation.

The majority of government agencies being “cut” have shown no great ROI for the taxpayer who’s required to fund them at the threat of fine and/or imprisonment. While most government employees really want to serve the public, too many just look at it as a job; a job that’s very hard to be fired from and if they can keep that job for 20 years, the taxpayer can support them for the rest of their lives.

Education “cuts”
Instead of improving our abysmal ranking in the world, our public schools seem more able to efficiently turn our “young skulls full of mush” into social justice warrior Democrats than to be fully functioning members of society, and the schools start early.

Infrastructure “cuts”
Show me a government road or building construction project that was ever completed on time and under budget?

Predictably, all we hear is that the “cuts” ultimately hurt the poor and benefit the “rich”.

“The Trump budget takes a sledgehammer to the middle class and the working poor, lavishes tax breaks on the wealthy and imagines all of the deficit problems away with fantasy math,” Schumer said, speaking on the Senate floor. “The Trump budget exists somewhere over the rainbow where the dreams of Mick Mulvaney, Paul Ryan and the Koch brothers really do come true. Of course, these dreams are a nightmare for the average working American.”
— Washington Examiner, 5/23/17

Forgot all about the Koch Brothers….

Disregard how Schumer had no numbers of his own to offer, but not to be outdone for relevance…

The former Democratic presidential nominee, who recently declared herself part of the Trump resistance, lashed out at the Republican president’s spending plan in aggressive terms after being honored in New York City by the Children’s Health Fund, a nonprofit organization that helps provide health care to poor and homeless children.
— NBC News, 5/24/17

If there’s any cruelty it’s the sheer disrespect the entitled and/or elected have for the hard-earned taxpayer dollar they spend like trust fund babies with Daddy’s credit card.

The poor are still poor because the government entrenched want them to stay poor. If they poor ever were allowed to gain back control of their lives, not only would agency employees be at risk of job loss, but many of those now earning meaningful paychecks would see how much was taken out in taxes and who would that eventually make them want to vote for?

So, when you absorb the Democrat and media “cuts” whine, remember this is not about who they say will be hurt.

This is about President Trump showing respect for our tax dollars; something those in government haven’t done in decades.