President Trump unveiled the RAISE Act (Reforming American Immigration for a Strong Economy) to the expected hysterics of the left while earning the agreement of unexpected others.

NBC News: RAISE Act Would Change Racial Makeup of US Immigrants
Miami Herald: Trump’s immigration bill seeks to ‘Make America White Again’ — and English-only
Newsweek: Where Stephen Miller Gets Immigration and American Jobs So Wrong
Politico: Why Trump’s New Immigration Bill Makes Sense
WaPo: Why, as an immigrant, I am not outraged by Trump’s immigration proposal

Democrats and their media are making the RAISE Act all about racism and xenophobia against immigrants while conveniently ignoring the fact that immigrating to the United States is a privilege, not a right.

But what’s even more amazing is that what’s in the RAISE Act is not a Trump concoction created out of nowhere with provisions foreign to who we are as a nation that welcomes immigrants. It turns out some of very bullet points in the RAISE Act today were proposed before… by Democrats who led a commission to correct the very issues that unskilled, non-English speaking, welfare-dependent immigrants continue to pose today.

During his 1995 State of the Union address, President Bill Clinton said what today would be considered outrageous by Democrats had the same been said by Donald trump.

…
In 1995 former Texas Congresswoman Barbara Jordan (recipient of the Presidential Medal of Freedom and civil rights leader) chaired the U.S. Commission on Immigration Reform. The commission’s final report, that could have passed for a first draft for President Trump’s RAISE Act, was endorsed by President Bill Clinton.

Jordan’s final report was presented to Congress in 1997 and appears to have gone nowhere after that, even with a Republican House and Senate.

What does THAT tell you? 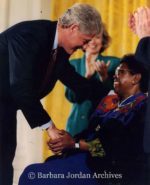 President Clinton yesterday endorsed the recommendations of a congressional commission calling for a substantial reduction in the number of legal immigrants allowed to enter the country.

White House press secretary Michael McCurry said he understood that some immigrant advocates are “up in arms” over the recommendation, but, “We respectfully disagree.” The report, said Clinton, “appears to reflect a balanced immigration policy that makes the most of our diversity while protecting the American work force so that we can better compete in the emerging global economy.” The commission also recommended greatly restricting the admission of unskilled workers and, in many cases, imposing “substantial” fees on employers who bring in foreign workers.

Clinton met briefly with Jordan yesterday, and afterward issued a statement praising the commission’s report as “consistent with my own views” and a “road map for the Congress to consider.” McCurry said administration officials “want to ensure, when they can, that American workers are not adversely affected by immigration numbers.”
— Washington Post, 6/8/95

The 1995 proposal emphasized the requirement of incoming immigrants to speak English, and if not an immediate family member of an immigrant already here, have at least a “baccalaureate” degree, thus be quickly employable and not become a public charge unlike the millions of immigrants who know prior to arrival how to tap into state and federal public services and funds.

Again, this is another example of partisan amnesia by some and ignorance by others.

The RAISE Act is not groundbreaking. It was proposed before and was left to wither on the vine. While the 1995 commission report was blown off, President Trump means business, is looking after the American people already here. Is that mean or racist?

History appears to be repeating itself again as the terms of admittance into the United States remains the same as it was in 1995.

President Trump unveiled new immigration strategy including favouring a ‘merit’-based system over family ties, as well as making it a requirement that future immigrants learn English and pass a civics exam. Speaking from the White House Rose Garden, Trump said he wanted to increase the proportion of highly skilled immigration from 12% to 57%, adding: ‘We discriminate against genius. We discriminate against brilliance. We won’t any more.’
— The Guardian, 5/16/19