Jennifer Lawrence, the Latest to Bash Trump and Americans Overseas

We’re getting so tired of having to repeat this but why don’t more Hollywood geniuses look up what happened to the successful career of the Dixie Chicks after they went overseas and bashed then-President Bush, thinking their words would never get back to greet them?

We must stop partisan politics at the water’s edge.
— Sen. Arthur Vandenberg (MI), 1947

Arrogance, narcissism, what is it that makes these overpaid, so-called celebrities continue this stupid practice to this day?

You know, you’re watching these hurricanes now, and it’s really hard, especially while promoting this movie, not to feel Mother Nature’s rage and wrath.
— Jennifer Lawrence

While promoting her new movie “Mother” and lamenting the aftermath of Hurricane Harvey, Jennifer Lawrence went off script and revealed to the British audience her genius. 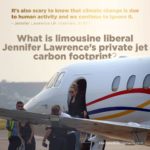 We’re proud to say that within our modest DVD and Blu-ray collection, we have not one movie with Jennifer Lawrence and have no plans to spend our dollars at a theater to see anything she does because, like Jerry Seinfeld said, without reading lines someone else wrote, she’s a nothing.

It’s also scary to know that climate change is due to human activity and we continue to ignore it. You’re watching these hurricanes now and it’s hard… not to feel Mother Nature’s wrath.

What does come from her heart isn’t worth much either.